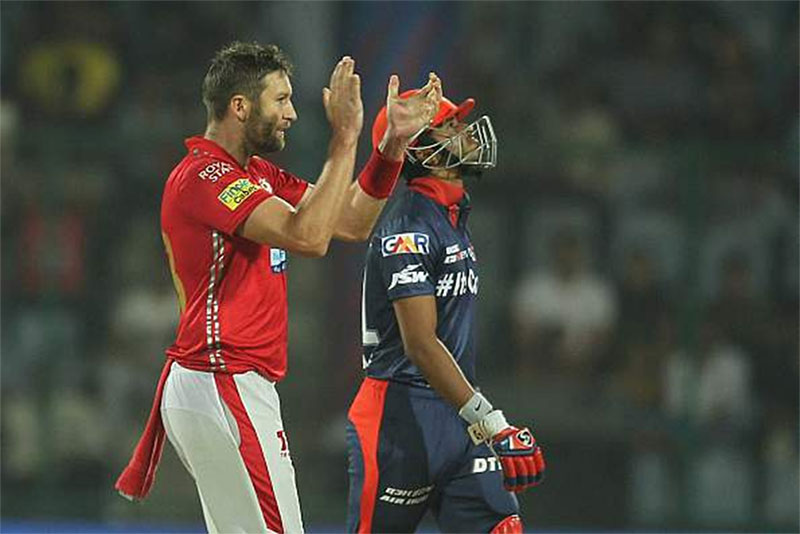 Andrew Tye bowled the 18th over and gave away only seven, and picked up the wicket of Tewatia. © BCCI

A fresh track at Feroz Shah Kotla, for Delhi Daredevils' first home game of the season, had plenty to offer for the pacers and appeared one of the quickest wickets so far in IPL 2018. Using that to their advantage Daredevils managed to restrict Kings XI Punjab to 143 for 8, thanks to the efforts of Liam Plunkett and Avesh Khan. However, it was a combination of pace and spin that did the trick for Kings XI Punjab as they overcame a Shreyas Iyer half-century to top the table with a four-run win.

So near yet so far, but why?

It was a measured approach from Iyer, who had to help DD consolidate after early wickets. Taking a risk against the spinners in the middle overs might have turned out to be counter-productive had he fallen at that stage. He decided to wait it out and take the game close. While Rahul Tewatia managed to score a six and a four off Barinder Sran in the 17th over, bringing down the equation to 28 off 18, Iyer still delayed teeing off. He didn't take a risk against Andrew Tye, who bowled the 18th over and gave away only seven, and picked up the wicket of Tewatia. When Sran bowled an excellent penultimate over, conceding only four, it was down to Iyer vs Mujeeb Ur Rahman. The DD batsman managed to score a six off the second delivery and a four off the fifth. But with five required off the final delivery, he failed to clear long off and was left crestfallen as Kings XI managed to sneak through. While there may be some arguments that Iyer could have been slightly aggressive earlier, his approach did nearly get the team over the line.

How did DD fare in the first half of the chase?

Flattered to deceive. Prithvi Shaw, the Under-19 World Cup winning captain, helped Daredevils race away at the start of the second innings by finding the fence regularly, including three fours off a Barinder Sran over. However, he got carried away as he tried to hit across the line to Ankit Rajpoot, ending his promising innings worth 22 off 10 deliveries. Rajpoot bagged the big fish Glenn Maxwell when he mistimed one to deep-midwicket while Gambhir followed soon after, getting a leading edge to mid-off off Tye to leave Daredevils in trouble at 48 for 3 at the end of the powerplay.

Were DD able to transfer the pressure back on KXIP?

No, the KXIP spinners didn't allow that. Unlike the Rishabh Pant-Shreyas Iyer partnership that helped DD make good progress after a slow start against RCB, they weren't able to do that in this game as KXIP did not let the momentum slip. Mujeeb Ur Rahman ensured there wasn't going to be another special knock from Rishabh Pant, foxing him with a carrom ball while Daniel Christian was run out attempting a quick second. The dismissals were the outcome of the spinners applying the stranglehold on the scoring. Ashwin entered the attack in the over after the powerplay and Mujeeb came on soon after. Between them, they bowled five overs, conceded only 20 runs and restricted the boundary scoring - only one four was scored in those five overs - which added to the pressure on DD. Ashwin, despite not picking up any wicket, gave away only 19 runs off his four overs.

What about KXIP's start with the bat?

Getting 51 in the powerplay would suggest KXIP were somewhat close to their average powerplay scoring rate of 10.67 in their games before this. But those runs came at a cost of two wickets within the first four overs. Without Chris Gayle, who was nursing a sore back, KXIP promoted Aaron Finch to the opening slot. But that move didn't pay off as Avesh Khan - one of Daredevils' five changes - surprised the openers with his sheer pace and in the process, accounted for Finch early. KL Rahul and Mayank Agarwal learnt quickly and did manage to use the pace of both Avesh and Trent Boult to their advantage to score a flurry of boundaries. But Plunkett got the better of Rahul with a change of pace and also accounted for Agarwal after the powerplay with a 145 kmph delivery, which again probably took the batsman by surprise. The wickets meant KXIP were well behind their current season's average score of 99 in the first 10 overs, finishing with 68 for 3. This also meant that Kings XI's middle order faced a big test.

Did they succeed in that test?

Not really. Yuvraj Singh endured another struggle before getting out to Avesh. Karun Nair came up with a hard-working innings but he couldn't finish it off well towards the end of the innings. David Miller too was bogged down for most parts, although his 19-ball 26 did help KXIP finish with 140 plus. The famed batting order of Kings XI Punjab didn't quite meet the expectations. Sustained aggression has been the mantra advocated by the team management - with Virender Sehwag at the helm - but it didn't work out in this game and they could only manage 75 in their last 10 overs, with only 27 coming in the final four.

Did DD have some positives?

Yes, they did. Iyer again proved his utility as a batsman despite the result not going DD's way. Avesh's 2 for 36 might have been slightly on the expensive side but the swiftness with which he let the ball go would have given Daredevils renewed hope for the future in the absence of Kagiso Rabada. The spinners also sneaked in a few quiet overs. Amit Mishra, who was at the receiving end of Rahul's blitz in their previous meeting, finished with an economy rate of 8.25 off his four overs despite conceding 16 in his final over. However, he would have been disappointed, as would have Rahul Tewatia, that David Miller was dropped in successive overs.

Where do they head from here?

Daredevils stay back in Delhi to play their second home game on April 27 - against Kolkata Knight Riders who'll be fresh after a seven-day break since suffering a loss against KXIP. Meanwhile, the R Ashwin-led side travel to Hyderabad to face Sunrisers, who'll be eager to make amends after two successive losses, including one against Kings XI.

Promoted Leipzig brushes off critics to go top of the table

BERLIN, Nov 8: Promoted RB Leipzig always expected their first Bundesliga season to be a turbulent affair but they seem to... Read More...

UML will stay neutral regarding the resignation of the Chief Justice: Oli
7 minutes ago