Italy sets record for not conceding, then allows a goal 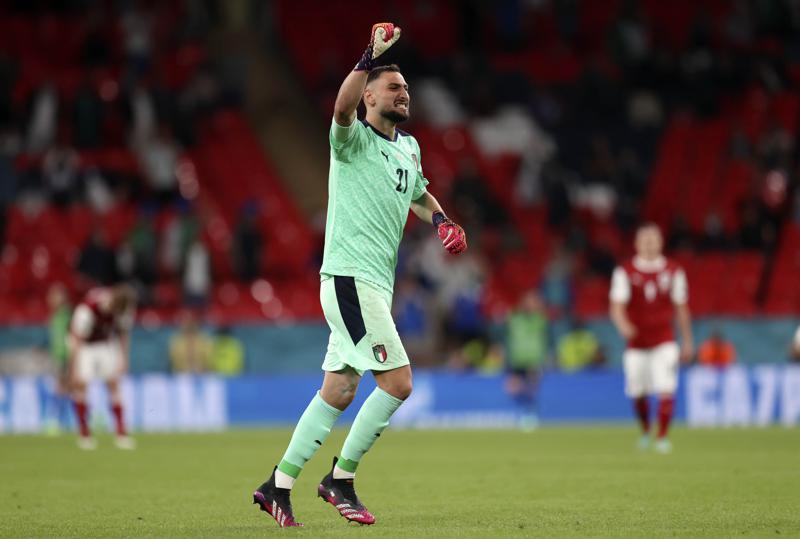 Italy's goalkeeper Gianluigi Donnarumma celebrates during the Euro 2020 soccer championship round of 16 match between Italy and Austria at Wembley stadium in London, Saturday, June 26, 2021. (Catherine Ivill/Pool via AP)

LONDON, June 27: After 19 hours of flawless defending, Italy broke its own world record for not conceding a goal in international soccer.

Italy goalkeeper Gianluigi Donnarumma played the bulk of the record 1,168 minutes, including three clean sheets in the group stage of the European Championship. But Austria pushed the Italians to extra time on Saturday in the round of 16 and finally found the net, despite Italy’s 2-1 victory at Wembley Stadium.

Austria forward Sasa Kalajdzic scored the goal with a header in the 114th minute, not long after substitutes Federico Chiesa and Matteo Pessina had put Italy in the lead.

“We knew it wouldn’t be easy,” Donnarumma said. “We were good not to give anything up, not even an inch, and we eventually found the two goals in extra time ... but these games can help us improve for the next ones.”

The previous record for scoreless minutes also belonged to Italy, set between 1972 and 1974 when Dino Zoff was the goalkeeper. That record lasted 1,143 minutes, and every second was played by Zoff.

Donnarumma played for 987 minutes of the current record, while Salvatore Sirigu played for 91 minutes, Alessio Cragno for 63 and Alex Meret for 27.

Italy nearly came up a few minutes short on Saturday. Austria forward Marko Arnautović headed the ball into the net in the 65th minute but the goal was disallowed after a video review showed he was offside.

“I didn’t realize anything on the field,” Donnarumma said. “Then they told me they were checking with the VAR and then when it was offside it was a burst of joy.”

Zoff had been preparing for the record to be broken. In a recent interview with Gazzetta dello Sport, he praised Donnarumma and the Italy team.

“He is an extraordinary goalkeeper who at age 22 has already had several seasons as first choice player at AC Milan,” said Zoff, who won the European Championship in 1968 and the World Cup in 1982.

“The extraordinary numbers are what impresses me about this national team. Numbers are everything in sport. It is a young team which surely has a future and that must start now to make a name for itself.”

“We’ve always defended well, but never as tonight,” said Italy defender Leonardo Spinazzola, who was named man of the match by UEFA. “Austria are physically strong and it was hard to win aerial duels. We played as a team and that’s important.”

Italy will next play either defending champion Portugal or Belgium in the quarterfinals in Munich on Friday.