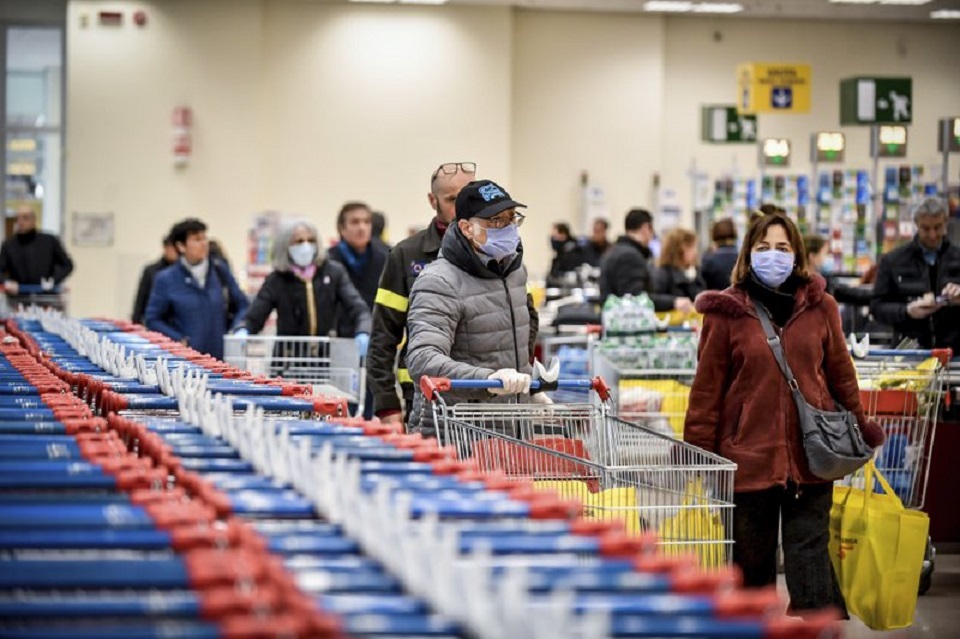 People wear masks at a supermarket in Milan, Italy, Sunday, March 8, 2020. Italy announced a sweeping quarantine early Sunday for its northern regions, igniting travel chaos as it restricted the movements of a quarter of its population in a bid to halt the new coronavirus' relentless march across Europe. (Claudio Furlan/LaPresse via AP)

ROME, March 9: Italy took a page from China’s playbook Sunday, attempting to lock down 16 million people — more than a quarter of its population — for nearly a month to halt the relentless march of the new coronavirus across Europe.

Weddings and museums, movie theaters and shopping malls are all affected by the new restrictions, which focus on a swath of northern Italy but are disrupting daily life around the country. Confusion reigned after the quarantine was announced, with residents and tourists from Venice to Milan trying to figure out how and when the new measures would be put into practice. Travelers crammed aboard standing-room-only trains, tucking their faces into scarves and sharing sanitizing gel.

After mass testing uncovered more than 7,300 infections, Italy now has registered more cases of the virus than any country but China, where the disease is in retreat. The death toll in the country rose to 366.

Around the globe, more and more events were canceled or hidden behind closed doors, from the pope’s Sunday service to a Formula One car race in Bahrain to a sumo competition in Japan, where wrestlers arrived at the arena in face masks and were required to use hand sanitizer before entering. In Saudi Arabia, officials announced all schools and universities would be closed starting Monday, following the lead of other Gulf countries. Questions grew about whether to maintain U.S. presidential campaign rallies and other potential “super-spreading” gatherings, as the virus enters new states.

Italian Premier Giuseppe Conte signed a quarantine decree early Sunday for the country’s prosperous north. Areas under lockdown include Milan, Italy’s financial hub and the main city in Lombardy, and Venice, the main city in the neighboring Veneto region. The extraordinary measures will be in place until April 3.

Tourists in the region, including those from abroad, were free to head home, the Italian transport ministry said, noting that airports and train stations remained open.

The pope, who has been ill, held his Sunday blessing by video instead of in person, even though he was not directly affected by the lockdown. He described feeling like he was “in a cage.”

It’s a feeling familiar in China, where the government locked down about 60 million people in central Hubei province in late January. Six weeks later, they are still effectively stuck.

The World Health Organization has said China’s move helped the rest of the world prepare for the virus to arrive, and WHO chief Tedros Adhanom Ghebreyesus tweeted his support Sunday for Italians and their “bold, courageous steps aimed at slowing the speed of the coronavirus.”

China has suffered about three-fourths of the world’s 109,000 coronavirus infections and most of its 3,800 deaths. New infections in China have leveled off, however, and most of those infected, in China and globally, have already recovered.

Italy is closing all museums and archaeological sites, even those far from the lockdown zone. It suspended all weddings until April 3. The northern regions concerned by Sunday’s decree are closing cinemas and ski slopes.

Eateries all around Italy are expected, somehow, to keep patrons a meter away from each other.

The Vatican Museums are now closed, including the Sistine Chapel, in yet another blow to Italy’s all-important tourism industry. Alitalia, the Italian airline that was already financially ailing before the virus, suspended all national and international flights from Milan’s Malpensa airport starting Monday.

Lombardy’s governor, who is in quarantine himself, sought to calm the public, discouraging hoarding and insisting “we’re not going to war.”

Chaos erupted in the hours before Conte signed the decree, as word leaked about the planned quarantine.

Students at the University of Padua in northern Italy who had been out at bars on a Saturday night saw the reports on their phones and rushed back to the train station.

Tensions over the restrictions triggered a riot at a prison in Modena by inmates angered that their loved ones would not be able to visit, the Italian daily La Repubblica reported. The inmates eventually surrendered.

In a reversal of the stereotypical north-south tensions in Italy, the governor of Puglia urged northerners to stay away and not bring virus infections down south.

“Get off at the first railway station. Don’t take planes,” Gov. Michele Emiliano said in his dramatic appeal. “Turn around in your cars, get off the pullman buses at the next stop.”

Factory worker Luca Codazzi was set to come out of a two-week quarantine at midnight Sunday — but instead was facing new limits on his freedom.

The government decree “was badly written, there are very many interpretations,” he said. “In theory, the cordon should go down at midnight,’’ Codazzi said. He still doesn’t know whether his factory will be open Monday.

In waters around the world, the virus has left the cruise ship industry in disarray.

The Grand Princess cruise ship, where 21 people have tested positive for the virus, was heading Sunday to Oakland after idling off San Francisco for days. It expects to land Monday. Americans will be transferred to facilities around the country for testing and isolation, but it’s not yet clear what will happen to passengers from many other countries.

Canadian officials said Sunday they will dispatch a plane to pick up more than 200 citizens who are aboard. The ship had a cluster of almost 20 infections during an earlier voyage that has led to one death.

Another cruise ship is in quarantine on the Nile in Egypt with 45 confirmed virus cases. Two other ships with no confirmed cases were turned away this weekend from Malaysia and Malta amid virus fears.

Advice to the public continues to vary. The U.S. Centers for Disease Control and Prevention urged older adults and people with severe medical conditions to “stay home as much as possible” and avoid crowds. A federal official told The Associated Press that the White House had overruled health officials who wanted to recommend that elderly and sick Americans not fly on commercial airlines too. A spokesman for U.S. Vice President Mike Pence denied that.

The U.S. death toll from the virus climbed to 21, with all but three victims in Washington state. Infections rose to more than 500, including the first case in the nation’s capital.

China on Sunday reported 44 new cases over the past 24 hours, the lowest level since it began publishing nationwide figures on Jan 20, and 27 new fatalities. Italy is now the No. 2 epicenter, surpassing South Korea, whose total is now just over 7,300, with 50 deaths overall.

BEIJING/SHANGHAI, Feb 5: Thousands of passengers and crew on two cruise ships in Asian waters were placed in quarantine on... Read More...

LYON, France, June 14: The jubilant scenes were reminiscent of Italy's triumph at the 2006 World Cup after the final... Read More...