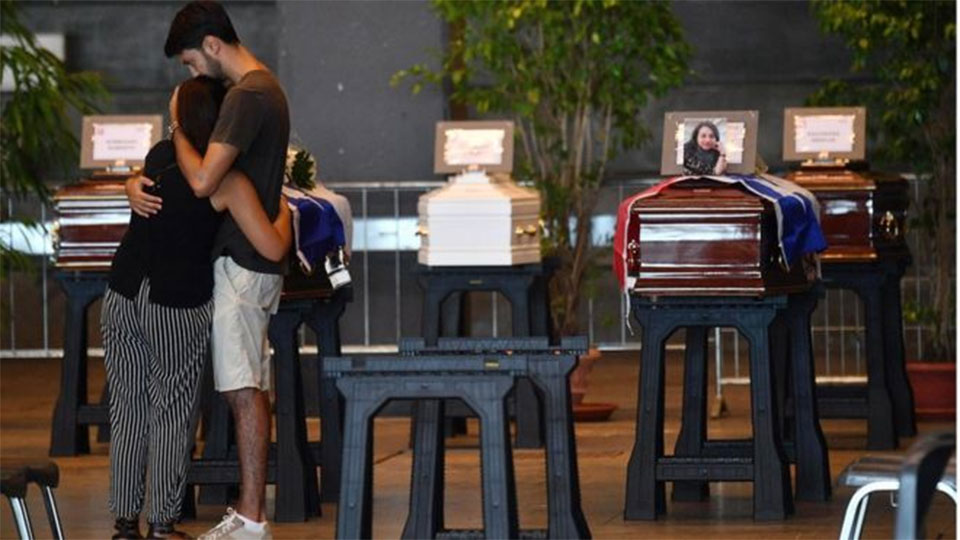 ITALY, Aug 18: Italian President Sergio Mattarella is due to preside over a state funeral for 18 of the victims of Tuesday's bridge collapse in Genoa.

Mr Mattarella and Prime Minister Giuseppe Conte will lead mourners at the ceremony at a hall in the city.

So far 38 people are confirmed to have died in the disaster and five are still unaccounted for.

Some families are reportedly staying away from Saturday's ceremony because of anger at the government.

The collapse of a section of the Morandi motorway bridge and the deaths of those crossing in vehicles have led to a fierce debate in Italy about the nation's infrastructure.

The government has set up a commission to examine the causes of the disaster and one member speculated on Friday that a broken cable rod was "a serious work hypothesis".

Antonio Brencich, a University of Genoa lecturer, said there were "eyewitness accounts and videos that go in this direction".

The bridge, which was constructed in the 1960s, has cables running directly from the deck to the top of the towers.

On Friday, grieving relatives gathered at the hall in Genoa where rows of coffins were laid out for Saturday's state funeral.

Family members embraced and prayed and placed photographs and flowers on the coffins of their loved ones.

Saturday's ceremony coincides with a national day of mourning and will be led by the city's archbishop, Cardinal Angelo Bagnasco.

But a number of families chose not to take part and are holding private burials elsewhere in Italy.

"Many do not want to take part in a showcase and I understand them," Father Mauro Brezzo, chaplain of Genoa's San Martino hospital, told Italian media.

One grieving mother quoted in Italian media said she held the Italian state responsible for the collapse, adding "the parade of politicians has been shameful".

Nunzia, mother of 26-year-old Gerardo Esposito, said government officials should not be seen at the victims' funerals.

Giovanni Battiloro was in the same vehicle as Mr Esposito. His father, Roberto, told Italian newspaper Il Messaggero: "We do not want farcical ceremonies.

"Our children are not a tool for public parades... it is among those who loved them that they will receive a farewell."

Other families said they simply preferred to grieve in private.

What is the government doing?

The BBC's James Reynolds in Genoa says Italy's populist government is keen to show it is taking action.

Mr Conte confirmed on Friday that legal proceedings were under way to strip the motorway operator Autostrade per l'Italia of its contracts.

"Today the government... has formally sent to Autostrade per l'Italia the letter of complaint which launches the process for revoking the concession," he said in a statement.

The statement said the company "had the obligation to look after the ordinary and extraordinary maintenance of the motorway" and had failed to do so.

It said Autostrade had 15 days to present counter-arguments.

The company has insisted that it more than fulfilled its duties. It said the bridge was monitored on a quarterly basis, as required by law, and extra checks were carried out by external experts.

Shares in its parent company Atlantia plummeted in the aftermath of the disaster.

Mr Conte has said that in future the government would compel companies that were granted concessions for Italy's infrastructure to invest more profits in maintenance and safety.

What happened to the Morandi bridge?

The bridge is a main road in and out of Genoa, linking it to the A10 motorway and the road to France.

Shortly before noon on Tuesday, a huge section about 200m (656ft) long suddenly collapsed, falling 45m along with dozens of vehicles.

By Friday, the official count was 38 dead, with five people still missing.

Rescuers hold little hope of finding anyone alive at this stage.

The cause of the unexpected tragedy is not yet clear. The bridge was having work done to shore up its foundations at the time, and there was also extremely heavy rainfall.

ITALY, Aug 17: Serious questions were being raised Friday in Italy over how one of Genoa’s main motorways gave away... Read More...

Rome bans all diesel cars in battle to curb pollution

ROME, Jan 14: Rome banned all diesel vehicles from its roads for the first time on Tuesday to try to... Read More...

MILAN, Jan 17: An avalanche buried a mountain hotel in an earthquake-hit region of central Italy, leaving at least 30... Read More...