Italy add to Dutch misery with 2-1 win in Amsterdam 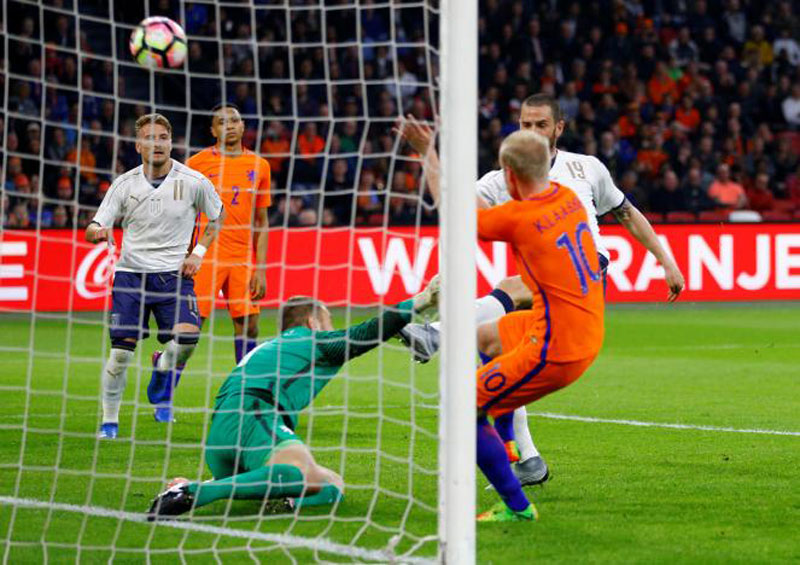 Italy recovered from an early own goal to beat the Netherlands 2-1 away in a friendly on Tuesday and cap a miserable few days for the hosts who sacked manager Danny Blind at the weekend.

Italy's Alessio Romagnoli deflected the ball into his own net after 10 minutes but Eder equalised within 60 seconds and centre back Leonardo Bonucci swept home a loose ball from a corner in the 32nd minute for the winner at the Amsterdam Arena.

Defeat for the Dutch came after a tumultuous period in which their World Cup qualification hopes were handed a severe blow by a 2-0 loss in Bulgaria on Saturday after which Blind was fired.

Under caretaker coach Fred Grim, the Netherlands began in fiery fashion on Tuesday and a quick set of passes between Davy Klaassen and Quincy Promes inside the Italy area saw the ball come off Romagnoli's foot into the net to put the hosts ahead.

But the Italians were level within a minute as a floated free kick was poorly cleared by Wesley Hoedt straight to Eder who fired home from outside the area. It was a replica of the second goal the Dutch conceded in Sofia on Saturday.

Netherlands defender Bruno Martins Indi headed against the bar from Memphis Depay's corner after 27 minutes but five minutes later Italy went in front when Romagnoli's effort from a corner brought a superb one-handed save from Jeroen Zoet, only for Bonucci to crash the ball into the roof of the net. An error by Bonucci early in the second half gave Promes a chance but he was denied by a fine save from Italy’s teenage goalkeeper Gianluigi Donnarumma.

Veteran Wesley Sneijder's cameo appearance near the end held out some promise for the Dutch but although he conjured up two shots in the closing stages they were both saved by Donnarumma, who was making his first start in the national team.

GENOA, June 28: A spectacular planned explosion on Friday knocked down the remaining spans and supporting pillars of the Italian... Read More...

Iniesta returns as Spain seeks to avenge loss to Italy

MADRID, Sept 30: Andres Iniesta will lead Spain in its World Cup qualifying matches against Italy and Albania after returning from... Read More...

Harvesting yartsa gunbu during the pandemic
17 hours ago