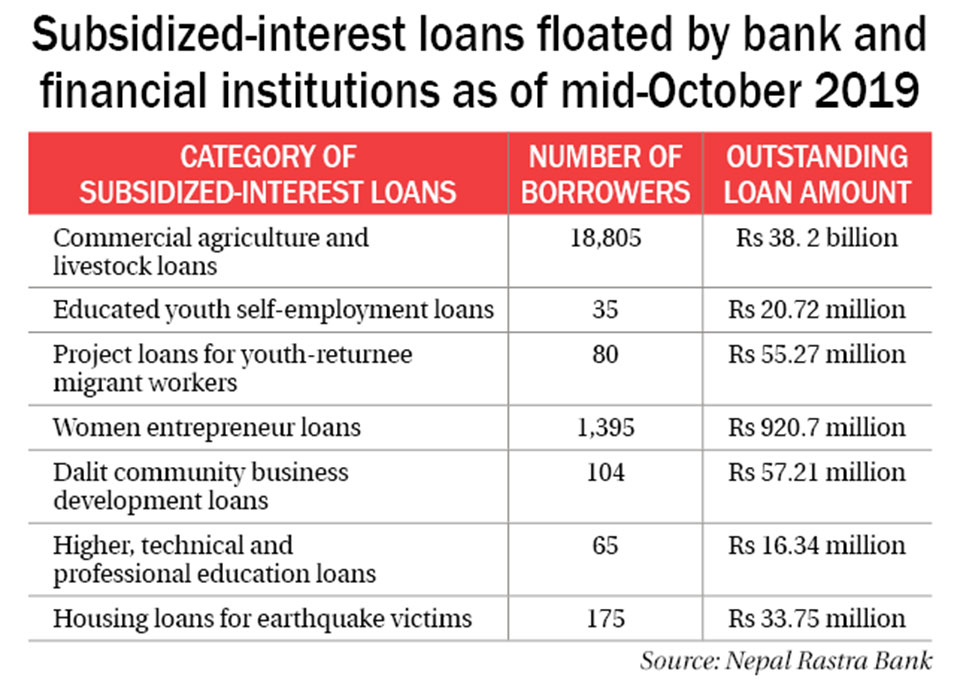 Similarly, the new rule introduced by the central bank through a circular requires ‘B’ class development banks to float such concessional loans to a minimum of 200 borrowers, while ‘C’ class financial companies will have to disburse such loans to 100 borrowers.

BFIs, however, cannot count borrowers under commercial agro and livestock farming as beneficiary of concessional loans.

The central bank’s direction comes amid concerns that BFIs are reluctant to extend interest-subsidized loans to targeted groups. The data of the central bank shows that only a few people have benefited from the scheme that the government announced through the budget speech for Fiscal Year 2018/19.

While the number of borrowers, who have acquired the commercial farming and livestock loans under this scheme, is high, there are not much who have benefited from the subsidized-interest loans on other six categories. So, the central bank has fixed the minimum number of borrowers to prod BFIs toward floating interest-subsidized loans to targeted groups, according to NRB officials. BFIs that do not meet the new requirement by the given deadline will face the central bank’s fine, they say.

The outstanding concessional loans extended to 18,805 borrowers for selected agriculture and livestock businesses stands at Rs 38.20 billion as of mid-October 2019, according to the NRB. The concessional loan outstanding to other headings remains Rs 1.10 billion utilized by 1,854 beneficiaries.

Under the scheme, the government subsidizes a certain percent of the interest costs.

While the commercial agriculture and livestock farming scheme was introduced few years ago, the government added six other categories in the last fiscal year. Other categories include Rs 700,000 loan for educated self-employment youth, Rs 1 million for business projects promoted by returnee migrant workers, Rs 1.5 million for women-run enterprise and Rs 1 million for business promoted by members of ‘Dalit’ community. Earthquake survivors (up to Rs 300,000 to rebuild their houses) and youths (up to Rs 500,000 for higher, technical or entrepreneurship education) can also borrow from BFIs at subsidized interest rates.

KATHMANDU, Mar 2: Lawmakers on Sunday urged the government to remove the clause in the proposed bill of Nepal Rastra... Read More...

Open up for business

Government should facilitate the investors, rather than adding one after another hassle ... Read More...

KATHMANDU, Nov 29: Nepal Rastra Bank (NRB) has taken a flexible policy for commercial banks in terms of calculation of their... Read More...