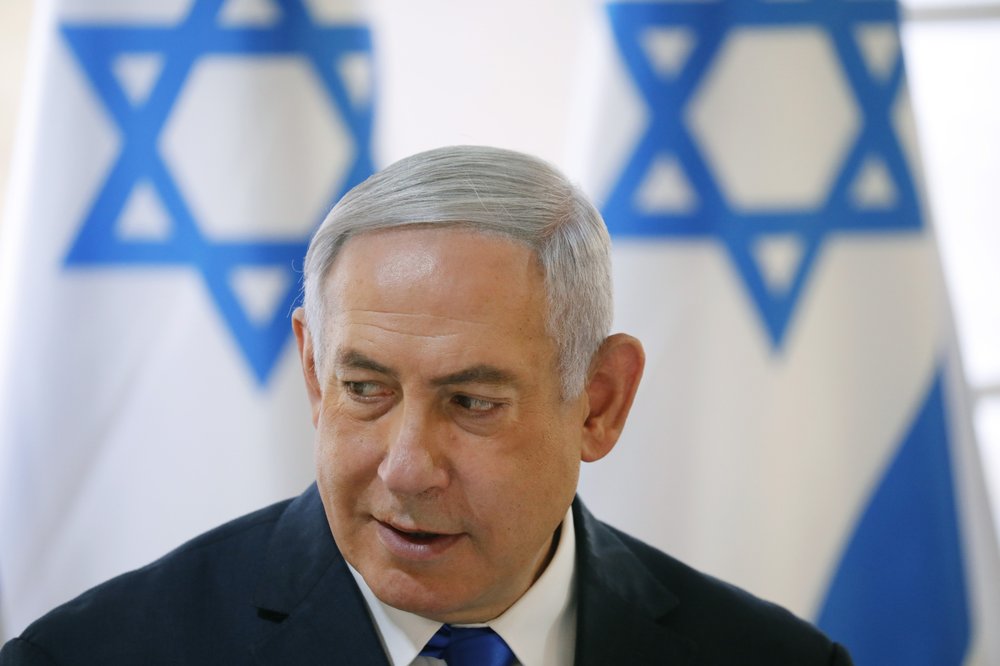 Israeli Prime Minister Benjamin Netanyahu chairs during the weekly cabinet meeting being held in the Jordan Valley, in the Israeli-occupied West Bank, Sunday, Sept. 15, 2019. Netanyahu convened his final pre-election cabinet meeting in a part of the West Bank that he's vowed to annex if re-elected. National elections are on Tuesday. (Amir Cohen/Pool via AP)

JERUSALEM, Sept 17: Israelis were voting Tuesday in an unprecedented repeat election that will decide whether longtime Prime Minister Benjamin Netanyahu stays in power.

Against the prospect of a likely indictment on corruption charges, Netanyahu is seeking a fifth term in office.

He faces a stiff challenge from retired military chief Benny Gantz, whose centrist Blue and White party is running even with Netanyahu’s Likud. Both parties could struggle to form a majority coalition with smaller allies, though, forcing them into a potential unity government.

It’s the second election this year, after Netanyahu failed to build a coalition following April’s vote and dissolved parliament.

Polling stations opened at 7 a.m. and exit polls are expected at the end of the voting day at 10 p.m. Official results are projected to come in overnight.

With his political career on the line, Netanyahu has campaigned furiously and taken a late hard turn to the right. He’s staged a flurry of media appearances to beseech supporters to vote in large numbers to stave off the prospect of a left-wing government he says will endanger the country’s security.

A centerpiece of his late-hour agenda has been the pledge to extend Israeli sovereignty over parts of the West Bank and to annex all the Jewish settlements there, something Netanyahu has refrained from doing during his decade-plus in power.

The proposal sparked a cascade of international condemnation, including from Europe and Saudi Arabia, an influential Arab country that has quiet, unofficial ties with Israel. The U.S., however, had a muted reaction, suggesting Netanyahu coordinated his plan with the Americans ahead of time.

He’s also been flaunting his close ties to President Donald Trump and the prospect of a defense pact between their countries shortly after the election.

Gantz is offering himself as an honest alternative to the scandal-plagued Netanyahu and his narrow coalition of ultranationalist and ultra-religious parties. Campaigning on rhetoric of unity and egalitarianism, Gantz says he represents a fresh start for Israel and has ruled out joining forces with a prime minister accused of serious crimes.

Netanyahu out, Bennett in as Israel marks end of an era