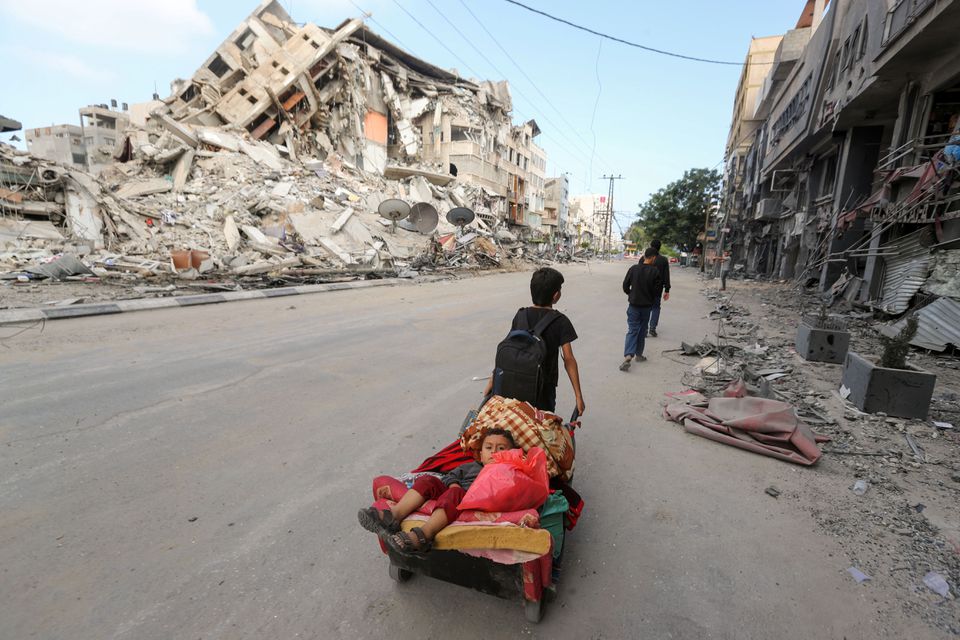 A Palestinian boy pulls a cart carrying his brother and their belongings as they flee their home during Israeli air and artillery strikes, near the site of a tower building destroyed in earlier strikes in Gaza City May 14, 2021. REUTERS/Mohammed Salem

Israel, May 14: Israel pummelled Gaza with artillery fire and air strikes on Friday as it targeted Palestinian militant tunnels to try to stop persistent rocket attacks on Israeli towns.

The 40-minute, pre-dawn offensive killed 13 Palestinians, including a mother and her three children whose bodies were pulled from the rubble of their home, health officials in Gaza said.

Palestinian rocket barrages against southern Israel swiftly followed on the fifth day of the most serious fighting between Israel and Gaza militants since 2014.

Egypt was leading international efforts to secure a ceasefire amid fears the conflict could spread. Security sources said neither side appeared amenable so far but a Palestinian official said negotiations had intensified on Friday.

Violence has since spread to cities where Jews and Israel's minority Arab community live side by side and there have been clashes between Palestinian protesters and Israeli security forces in the Israeli-occupied West Bank, where health officials said five Palestinians had been killed on Friday.

At least 122 people have since been killed in Gaza, including 31 children and 20 women, and 900 others wounded, Palestinian medical officials said.

Among eight dead in Israel were a soldier patrolling the Gaza border, six Israeli civilians - including two children, an elderly woman and an Indian worker, Israeli authorities said.

The U.N. Office for the Coordination of Humanitarian Affairs said there were reports of more than 200 housing units destroyed or severely damaged in Gaza and hundreds of people seeking shelter in schools in the north of the coastal enclave.

Israel says it makes every effort to preserve civilian life, including warning in advance of attacks. read more

"What we were targeting is an elaborate system of tunnels that spans underneath Gaza, mostly in the north but not limited to, and is a network that the operatives of Hamas use in order to move, in order to hide, for cover," Conricus told foreign reporters, adding that the network was dubbed "the Metro".

Dozens of mourners took part in the funeral of six people - members of two families whose houses were hit by Israeli air strikes on Thursday - in the southern Gaza town of Rafah.

Holding the cloth-bound body of his 19-month-old nephew in his arms, Khamees al-Rantissi said their house was bombed without prior warning. "What was this child doing? What threat did he pose for the state of Israel?" Rantissi asked.

Egypt was pushing for both sides to cease fire from midnight on Friday pending further negotiations, two Egyptian security sources said, with Cairo leaning on Hamas and others, including the United States, trying to reach an agreement with Israel.

"The talks have taken a real and serious path on Friday," a Palestinian official said. "The mediators from Egypt, Qatar and the United Nations are stepping up their contacts with all sides in a bid to restore calm, but a deal hasn't yet been reached."

The head of the International Criminal Court warned that those involved in the bloodshed may be targeted by its investigation into alleged war crimes in earlier bouts of the conflict. read more

The hostilities have fuelled tension between Israeli Jews and the country's 21% Arab minority. Violence continued in mixed communities overnight after street fighting and tit-for-tat attacks that prompted Israel's president to warn of civil war.

"They say Gaza is spiralling out of control, but what is happening here scares me more," said Majd Abado, an Arab resident of the mixed city of Acre, where people from both communities said they were afraid to leave their homes.

Israel's military said a Palestinian tried to stab a soldier near the West Bank city of Ramallah. The soldier shot the attacker. Palestinian health officials said the man was killed.

The Israeli military's build-up of forces on the Gaza border has raised speculation of a possible repeat of ground invasions during Israel-Gaza wars in 2014 and 2009. But Israel is loath to risk a sharp increase in military casualties on Hamas turf.

Major airlines have suspended flights to Israel and at least two owners of tankers delivering crude oil asked to divert from Ashkelon to the port of Haifa, farther north of Gaza, because of the conflict, shipping sources said on Friday.

The U.N. Security Council will publicly discuss the worsening violence on Sunday, diplomats said after the United States had objected to a meeting on Friday.

The Israeli military has put the number of militants killed in Israeli attacks at between 80 and 90. It said that so far, some 1,800 rockets have been fired at Israel, of which 430 fell short in Gaza or malfunctioned.

JERUSALEM, Aug 23:  An explosion Friday near a West Bank settlement that Israel said was a Palestinian attack killed a... Read More...

TEHRAN, Nov 5: Iran says it has successfully thwarted a wave of cyber attacks apparently staged by Israel to target the... Read More...