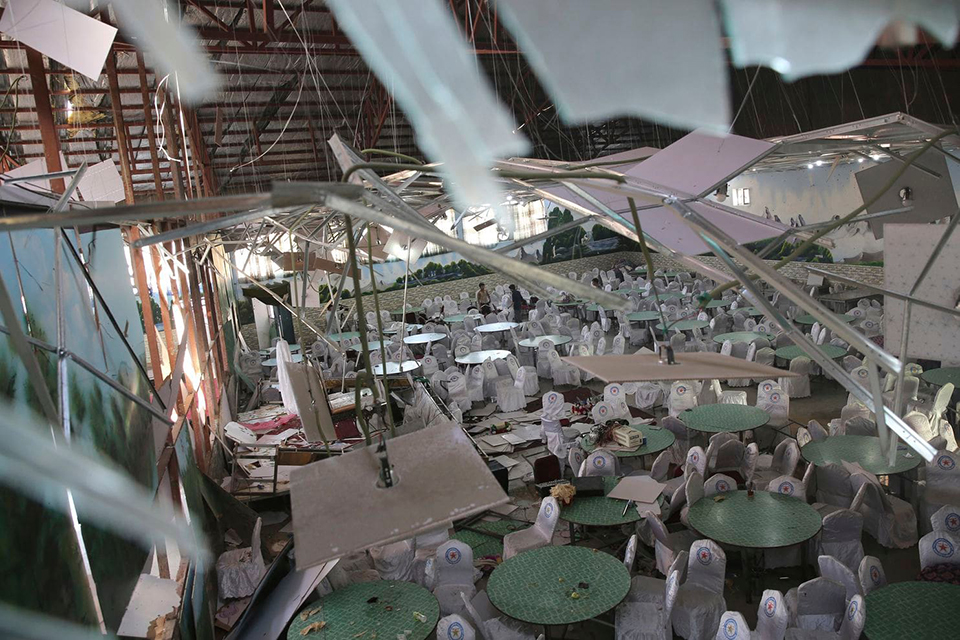 KABUL, Aug 18: The Islamic State militant group claimed responsibility on Sunday for a suicide blast at a wedding reception in Afghanistan that killed 63 people, underling the dangers the country faces even if the Taliban agree on a pact with the United States.

The Saturday night attack came as the Taliban and the United States try to negotiate an agreement on the withdrawal of U.S. forces in exchange for a Taliban commitment on security and peace talks with Afghanistan’s U.S.-backed government.

Islamic State (IS) fighters, who first appeared in Afghanistan in 2014 and have since made inroads in the east and north, are not involved in the talks. They are battling the government and U.S.-led international forces and the Taliban.

The group, in a statement on the messaging website Telegram, claimed responsibility for the attack at a west Kabul wedding hall, in a minority Shi’ite neighborhood, saying its bomber had been able to infiltrate the reception and detonate his explosives in the crowd of “infidels”.

IS has claimed some of the most bloody attacks in Afghan cities over the past couple of years, with some aimed at the Shi’ite minority.

The Taliban had earlier denied responsibility for the Kabul attack and condemned it.

More than 180 people were wounded with many women and children among the casualties, interior ministry spokesman Nasrat Rahimi said on Sunday, as families thronged to Kabul’s crowded cemeteries.

“We want peace, not such brutal suicide attacks,” said Ahmad Khan, who was burying a relative.

Pictures on social media from the scene of the blast showed bodies strewn amid overturned tables and chairs at the wedding hall, with dark bloodstains on the carpet.

Both the bride and groom survived.

“I won’t ever be able to forget this however much I try,” the groom, identified as Mirwais, told the TOLOnews channel.

He said his cousin and some friends had been killed.

“I can’t go to the funerals, I feel very weak ... I know that this won’t be the last suffering for Afghans, the suffering will continue.”

The bride’s father told TOLOnews 14 members of his family were killed.

Wedding halls have become a big business in Kabul as the Afghan economy slowly picks up and families spend more on celebrations. Big, brightly lit halls now line some suburban streets of the city, and bombers have targeted them before.

At least 40 people were killed in a wedding-hall blast in Kabul in November.

There has been no let-up in fighting and bomb attacks in Afghanistan over recent months despite the talks between the United States and the Taliban since late last year.

In the northern province of Balkh, 11 civilians were killed on Sunday when a roadside bomb blew up their van, police said.

President Ashraf Ghani, in comments on the Kabul blast before the IS claim, said the Taliban could not “absolve themselves of the blame for they provide a platform for terrorists”.

The Taliban have been fighting to expel foreign forces and re-establish an Islamic state since they were ousted in October 2001, weeks after the Sept. 11 attacks on the United States.

Both U.S. negotiators and the Taliban have reported progress after eight rounds of talks since late last year. But some Afghans were skeptical about the effort, amid the carnage.

U.S. President Donald Trump has made no secret of his desire for a U.S. pullout from Afghanistan and an end to America’s longest war.

But there are concerns among Afghan officials and U.S. national security aides that Afghanistan could plunge into a new civil war that could see a return of Taliban rule and international militants, including IS, finding a refuge.

President did not follow rules and procedures: General Secy Gurung
24 minutes ago