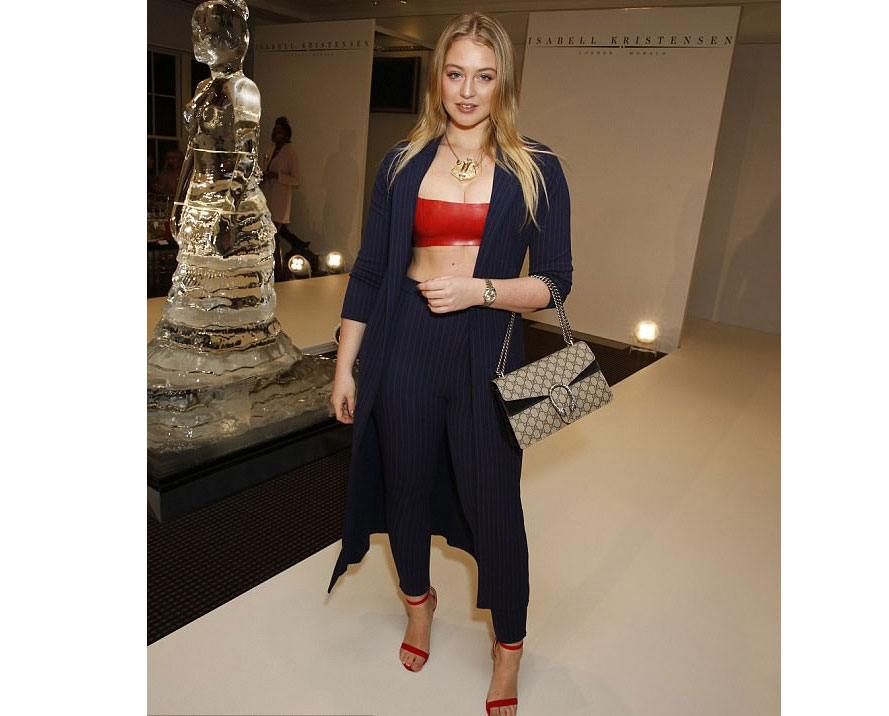 She is a rising star with the confidence to bat off nasty comments from online trolls.

And Iskra Lawrence put on another defiantly skimpy ensemble to showcase her hourglass curves at Isabel Kristensen's LFW show 195 Piccadilly, in London on Friday.

The body confidence champion, 27, put the focus of her ensemble on her red hot bralette which struggled to contain her ample cleavage.

Iskra matched her incredibly racy lingerie with her scarlet sky-scraper stilettos which added to her height to make her stand out at the glitzy fashion event.

Focused on her cleavage, the golden-haired stunner drew further attention with her statement piece and jewellery costume necklace.

The model, who discourages the use of the phrase 'plus size', truly championed her enviable curves in the navy pinstriped Co-Ords.

For a natural look, the curvy queen enhanced her features with light touches of make-up and framed her face with soft golden locks.

Hot on her fashionable stilettos was the glamorous Made In Chelsea's Tiffany Watson, who made her presence known at the fashion show in her very own pair of heels.

The Made In Chelsea queen looked beautiful in her buttercup yellow dress which grazed her thigh to give onlookers a good glimpse of her lengthy pins.

Every inch of summer, Sam Thompson's ex shunned the cleavage or legs rule as she also framed her assets with a jagged edge to draw attention to her perky assets.

Known for her sense of fun and racy ensembles on the party circuit, Lizzie Cundy ensured she didn't miss out on one of the hottest fashion events of the week.

The ex-WAG put her age-defying figure on display in a plunging dress, which in turn teased a glimpse of her cleavage and frilled lingerie.

But she didn't stop there as Lizzie also showcased her tremendous legs in the soaring split of the dress, accompanied with a pair of thigh-high boots.

Iskra has always been passionate about body confidence and she has refused to label herself a plus size model and previously protested against the lack of diversity during London Fashion Week.

It is no wonder the blonde has bagged many high-profile invites, after forging a successful modelling career, with the aim to change the industry's perceptions on beauty and size.

At the perfume launch, the golden-haired beauty beamed for cameras as she brushed off the cruel comments from trolls.

The body confidence champion divulged how she battles with online trolls who label her a 'fat pig' on her social media account.

Iskra told Harper's Bazaar in January 2018: 'I get comments like "fat pig" and I just think "whatever", but sometimes it’s good to make something positive from it.

'I deal with it in two ways. I either just block and delete because I know that it's not personal. There are people out there that unfortunately, usually because hurting, like to hurt other people – it’s for attention or whatever. Other times I like to do something positive with it.'

Casey Batchelor set pulses racing on Friday as she announced the release of her steamy 2017 calendar. ... Read More...

Her high-profile social media presence inevitably opens her up to abuse from online trolls. ... Read More...

As a former Victoria's Secret Angel she is no stranger to posing in skimpy swimsuits. ... Read More...