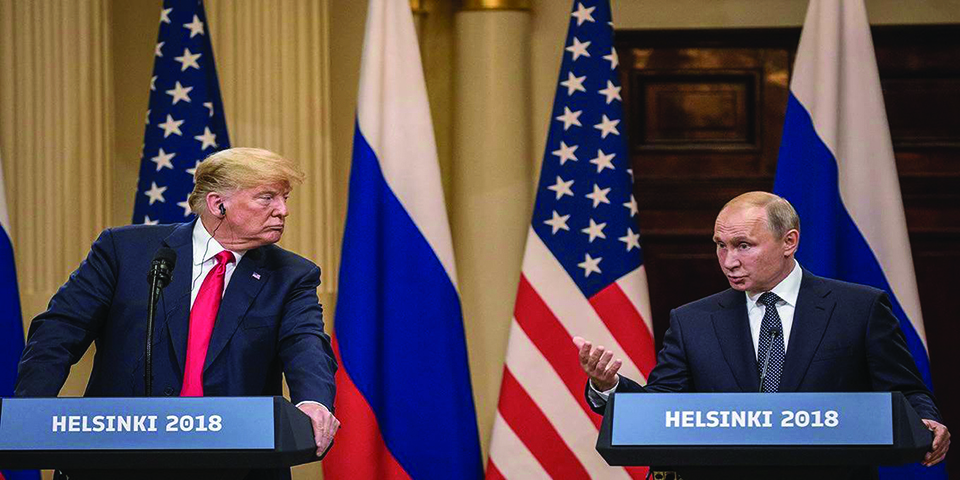 Trump has done little to improve relationship, despite some diplomatic overtures, including several invitations for Putin to visit the White House

NEW YORK – Most of the world has spent the last two years thinking that Russian President Vladimir Putin is twisting his US counterpart, Donald Trump, around his little finger. But it could well be Trump who is leading Putin by the nose.

Trump does love Putin, or so he says. In his hyperbolic reality-TV-style, Trump has praised Putin’s strongman leadership style and boasted that he could improve America’s relationship with the Kremlin.

This summer, during their bilateral summit in Helsinki, Trump even sided with Putin, a former KGB operative, over US security officials on the issue of Russia’s now-documented interference in the 2016 US presidential election. According to Putin, he rooted for Trump (but of course did not interfere on Trump’s behalf) because they shared a desire to improve bilateral relations.

Now, more than ever, Putin needs America’s friendship. Though he was reelected president in a landslide in March, his approval rating has since plummeted to 45 percent. Russians resent the mounting economic insecurity brought about by the sanctions Trump’s predecessor, Barack Obama, initiated after Russia’s annexation of Crimea in 2014 (a move that initially bolstered Putin’s flagging approval ratings).

Popular discontent in Russia has also been inflamed by the authorities’ widely reviled pension reform, which includes an increase in the retirement age. It may be exacerbated further by a generalized “animosity fatigue” among Russians, who are simply tired of Putin’s belligerent foreign policy in Ukraine and Syria, and his unrelenting anti-Western propaganda.

Unfortunately for Putin, Trump has done little to improve the bilateral relationship, despite some diplomatic overtures, including several invitations for Putin to visit the White House. Although Trump’s alienation of America’s allies does serve Putin’s seeming desire to weaken the West, it is unlikely that he has taken these steps for Putin’s sake. Meanwhile, the US under Trump has implemented additional sanctions that Russia itself has condemned as “draconian.”

In March, in response to a nerve-agent attack on the former Russian double agent Sergei Skripal and his daughter in the United Kingdom, the Trump administration expelled 60 Russian diplomats, the largest number since the Soviet era. For Putin, the timing of the move—which came immediately after Trump warmly congratulated him on his electoral victory—must have made it all the more galling.

The following month, the US Treasury sanctioned more than 20 Russian individuals and companies—including the oil and aluminum tycoons Oleg Deripaska and Alexey Miller—causing the affected firms’ share prices to fall. In August, the Trump administration banned US companies from selling gas turbines and electronic equipment to Russia, owing to those products’ potential military applications.

Moreover, Trump’s decision to impose tariffs on aluminum and steel imports, while not targeted specifically at Russia, will cost the Russian economy upwards of $3 billion next year. More recently, Trump announced his intention to withdraw from the Intermediate-Range Nuclear Forces Treaty, a bilateral arms-control deal dating back to the Cold War. While both sides have long accused each other of violating the INF, the idea of simply abandoning arms control was always deemed too dangerous, until Trump.

The Kremlin has remained willing to believe that Trump’s failure to deliver on his promise to improve ties is the result of opposition in Congress, not to mention the demonization of Putin by US Democrats and media. Suspicious of any action that might seem to benefit Putin, the logic goes, they must be preventing Trump from embracing Russia on a policy level.

But the truth is that neither Democrats nor the media have actually had much success in reining in Trump. As for the Republicans, who control both houses of the US Congress, even once-vocal opponents—such as Senators Lindsey Graham and Ted Cruz—now lick Trump’s boots. With Trump having bullied his party into submission, it seems unlikely that his failure to deliver for Putin can be blamed on others.

The more likely explanation for Trump’s betrayal of Putin is that his warm rhetoric was, like everything else that comes out of his mouth, driven by his desire for ratings, not any actual interest in—let alone commitment to—helping the Kremlin. Consider how Trump’s early overtures to another strongman, Chinese President Xi Jinping, gave way to a full-blown trade war against that country, which Trump now portrays as America’s enemy.

Of course, the world has come to expect broken promises and capriciousness from Trump. What is surprising is how Putin has misread the situation so badly. How could such a keen observer of the US, whose former career as a spy honed his ability to decipher people’s motives and intentions, fail to recognize the falseness of Trump’s promises?

If anyone knows that actions speak louder than words, it is Putin, whose words often include transparent denials of documented wrongdoing, from meddling in the US election to violating treaties. Yet Putin continues to ignore Trump’s actions and seeks for more meetings “to touch base” with the ever-complimentary US president, such as at this month’s World War I centenary in Paris or the G20 summit in Argentina.

Putin seems to think that he has been using the strategically incompetent Trump to advance his ends. In fact, Trump has dragged everyone into his reality-TV world, in which sensation, exaggeration, and misinformation all serve his only true goal: to be the last “survivor” on the island. By the time Putin finally realizes that he has been duped, the world will probably have paid a high price in terms of political stability, strategic security, and environmental damage. And Putin will have to pay it, too.

Trump’s mood is reportedly fouler than ever, and the holiday season has become suffused with increased sense of danger emanating... Read More...

KMC to implement 'One Ward, One Model School' program
49 minutes ago