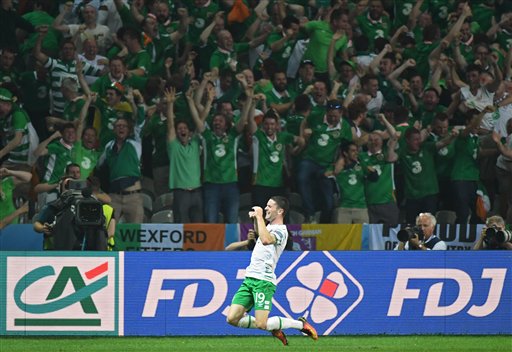 Even when another early exit from a European Championship seemed unavoidable, Ireland refused to concede.

A late goal from Robbie Brady was enough for Ireland to beat a reshuffled Italy side 1-0 on Wednesday and advance to the knockout stages for the first time as one of the best third-place teams.

"It was very special. I am thrilled, it was a great win," Ireland coach Martin O'Neill said. "We deserved to win. We played some phenomenal stuff. There wasn't a player in the Irish shirt that didn't play heroically."

Italy, which was already assured of top spot in Group E after two straight wins, will meet defending champion Spain next at the Stade de France on Monday in what is potentially the most mouth-watering match of the round of 16.

Brady's 85th minute goal was just reward for an inspired performance by the Ireland team, which needed to win to get through to the next round. His goal capped a period of intense Irish pressure that also saw Wes Hoolahan miss a golden chance to put Ireland ahead.

"It's a proud night for myself and fantastic for the team," Brady said. "The lads worked their socks off today. It was the perfect timing for a goal."

While Ireland strived for a winner, Italy found some fluency in the second half. Simone Zaza went close with a powerful volley that went just over the cross bar, and substitute Lorenzo Insigne hit the far post with a curling low shot from outside the area.

"We conceded the goal just as we seemed to take control of the game," Insigne said. "The result is a shame but in the end they deserved it."

Ahead of the next round, Italy coach Antonio Conte had left eight regular starters out of his lineup, including goalkeeper Gianluigi Buffon, who has been suffering from a fever over the last few days. Only defenders Andrea Barzagli and Leonardo Bonucci as well as midfielder Alessandro Florenzi started in Italy's previous game against Sweden.

"We conceded when we were on top," Conte said through an interpreter. "It was a very physical match on a barely playable pitch. The pitch did punish us a bit more than them."
The pitch at the Stade Pierre Mauroy is to be re-laid over the coming days, largely because of the impact of the recent heavy rain.

Regardless of the state of the pitch and the strength of the Italian side, Ireland's victory is one of its most notable.

"We are not going to give up here," Brady said. "We've managed to beat some of the best teams in the world. If we click together, we can beat anyone."

Finding innovative ways of promoting and protecting sustainable use of terrestrial ecosystem was an important concern for many development partners Read More...

KATHMANDU, Jan 11: The Shiva Sena Nepal, a political party, offered a 108 meters long garland to the statue of... Read More...

Budget to be allocated for tourism revival: New NTB board members
10 hours ago