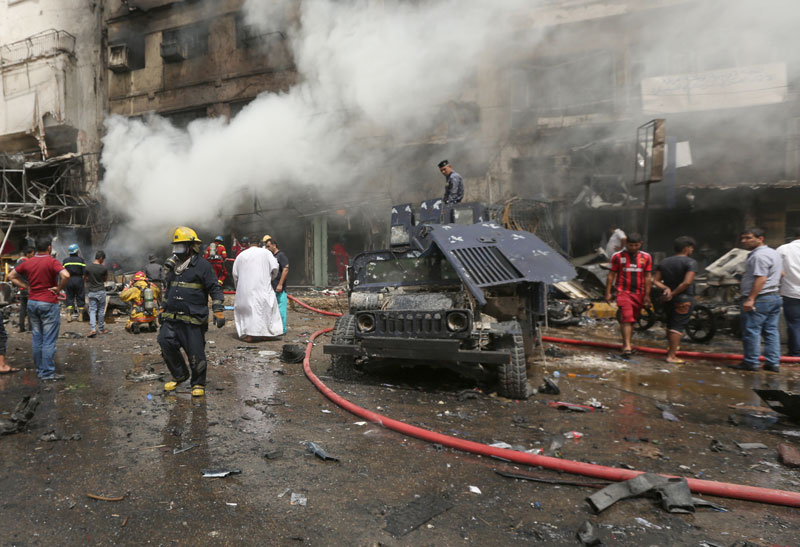 In the deadliest attack, a car bomb hit Karada, a busy shopping district in the center of Baghdad, killing 78 people and wounding 160, according to police and hospital officials. It struck as families and young people were out on the streets after breaking their daylight fast for the holy month of Ramadan.

The Islamic State group claimed responsibility for the bombing in a statement posted online, saying they had deliberately targeted Shiite Muslims. The statement could not be independently verified.

At dawn Sunday, fire fighters were still working to extinguish the blazes and bodies were still being recovered from charred buildings. Many of the dead were children, according to Associated Press reporters at the scene. Ambulances could be heard rushing to the site for hours after the blast. An eyewitness said the explosion caused fires at nearby clothing and cellphone shops.

In the second attack, an improvised explosive device went off in eastern Baghdad, killing 5 people and wounding 16. No group claimed responsibility for the attack.

The casualty figures were confirmed by police and hospital officials, who spoke anonymously because they were not authorized to release information to the press.

The Baghdad attacks come just over a week after Iraqi forces declared the city of Fallujah "fully liberated" from IS. Over the past year, Iraqi forces have racked up territorial gains against IS, retaking the city of Ramadi and the towns of Hit and Rutba, all in Iraq's vast Anbar province west of Baghdad.

Despite the government's battlefield victories, IS has repeatedly shown it remains capable of launching attacks far from the front-lines.

Before the launch of the operation to retake Fallujah, Iraq's prime minister was facing growing social unrest and anti-government protests in Baghdad sparked in part by popular anger at the lack of security in the capital. In one month, Baghdad's highly-fortified Green Zone — which houses government buildings and diplomatic missions — was stormed twice by anti-government protesters.

IS still controls Iraq's second largest city of Mosul as well as significant patches of territory in the country's north and west.

At the height of the extremist group's power in 2014, IS rendered nearly a third of the country out of government control. Now, the militants are estimated to control only 14 percent of Iraqi territory, according to the office of Iraq's prime minister.

CARACAS, Venezuela (AP) — At least 12 people were killed overnight during looting and violence in Venezuela's capital amid a... Read More...