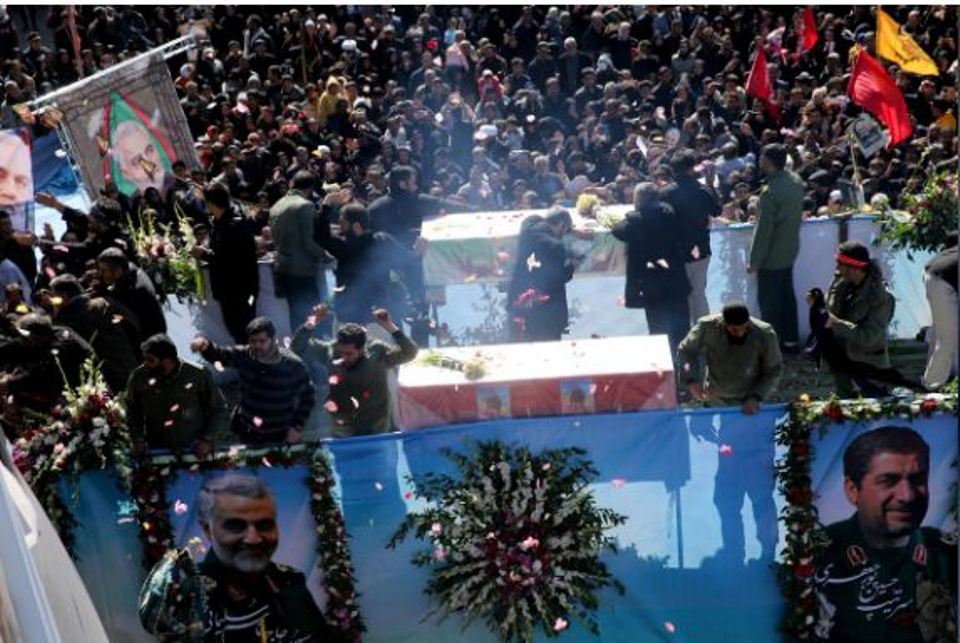 Iranian people attend a funeral procession and burial for Iranian Major-General Qassem Soleimani, head of the elite Quds Force, who was killed in an air strike at Baghdad airport, at his hometown in Kerman, Iran January 7, 2020. Mehdi Bolourian/Fars News Agency/WANA (West Asia News Agency) via REUTERS

DUBAI/BAGHDAD, Jan 7: The body of a top Iranian military commander killed in a U.S. drone strike in Iraq last week reached his hometown for burial on Tuesday as the U.S. defense secretary denied reports that the U.S. military was preparing to withdraw from Iraqi territory.

The death of Qassem Soleimani, who built up Tehran’s network of proxy forces across the region, has prompted mass mourning in Iran and led to renewed Iranian threats to drive U.S. troops from Iraq, where Tehran has vied with Washington for influence.

U.S. and Iranian warnings of new strikes and retaliation have stoked concerns about a broader Middle East conflict and led to calls in the U.S. Congress for legislation to stop U.S. President Donald Trump going to war with Iran.

“We will take revenge, hard and definitive revenge,” the head of Iran’s Revolutionary Guards Hossein Salami told tens of thousands of mourners in Soleimani’s hometown of Kerman, many of them chanting “Death to America” and waving the Iranian flag.

Iran’s Supreme Leader Ayatollah Ali Khamenei and top military commanders have said Iranian retaliation for the U.S. action would match the scale of Soleimani’s killing but that it would be at a time and place of Tehran’s choosing.

“The martyr Qassem Soleimani is more dangerous to the enemy than Qassem Soleimani,” Salami said, after the general’s body ended a tour of Iraqi and Iranian cities following his death on Friday that clogged streets with mourners.

Reuters and other media reported on Monday that the U.S. military had sent a letter to Iraqi officials informing them that American troops would be repositioned in preparation to leave, drawing a swift denial from the Pentagon.

“There’s been no decision whatsoever to leave Iraq,” Defense Secretary Mark Esper told reporters. “I don’t know what that letter is.”

U.S. Army General Mark Milley, chairman of the Joint Chiefs of Staff, said the letter was a “poorly worded” draft document meant only to underscore increased movement by U.S. forces.

The letter, addressed to the Iraqi Defence Ministry’s Combined Joint Operations and confirmed as authentic by an Iraqi military source, had caused confusion about the future of the roughly 5,000 U.S. troops still in Iraq, where there has been a U.S. military presence since Saddam Hussein was toppled in 2003.

Iran’s long-repeated demand for U.S. forces to withdraw had gained traction on Sunday when Iraq’s parliament, dominated by lawmakers representing Muslim Shi’ite groups, passed a resolution calling for all foreign troops to leave the country.

Iraq’s caretaker Prime Minister Abdel Abdul Mahdi told the U.S. ambassador to Baghdad on Monday that both sides needed to work together to implement the parliamentary resolution, the premier’s office said, without giving a timeframe.

The letter, signed by a senior U.S. Marine Corps officer, had referred to “repositioning forces over the course of the coming days and weeks to prepare for onward movement”.

Tensions between Iran and the United States have been ratcheting higher since Washington withdrew in 2018 from a nuclear deal between Tehran and other world powers. The United States has since imposed crippling economic sanctions on Iran.

Iran said on Sunday it was dropping all limitations on uranium enrichment, its latest step back from commitments under the deal.

“The United States will get the decisive, definite answer for its arrogance at the time and place when it will feel the most pain,” Zarif said in a speech on regional developments that was broadcast on state television.

The French foreign minister said European powers, which have been trying to salvage the nuclear deal, would decide in coming days whether to launch a dispute resolution process that could lead to a reinstatement of U.N. sanctions on Iran.

Trump’s U.S. political rivals have challenged the Republican president’s decision to order the killing of Soleimani and its timing. Trump’s administration said Soleimani was planning new attacks on U.S. interests.

U.S. general Milley said the threat from Soleimani was imminent. “We would have been culpably negligent to the American people had we not made the decision we made,” he said.

Trump has promised strikes on 52 Iranian targets, including cultural sites, if Iran retaliates for Soleimani’s death with attacks on Americans or U.S. assets, although U.S. officials sought to downplay his reference to cultural targets.

NEW YORK, Jan 9: The election was always going to be about Donald Trump. But over the span of a few... Read More...

WASHINGTON, Jan 8: Democrats in the U.S. Congress and some of the party’s presidential contenders warned on Tuesday about escalating conflict... Read More...