Iran uses violence, politics to try to push US out of Iraq 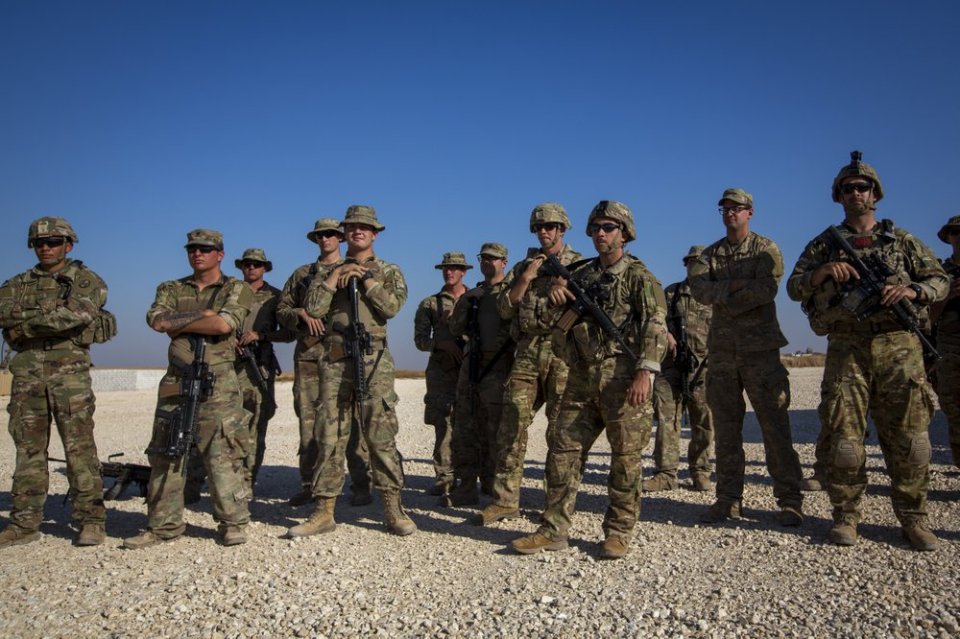 FILE - In this Monday, Nov. 11, 2019, file photo, crewmen of Bradley fighting vehicles stand guard at a U.S. military base in Northeastern Syria. Iran has had its fingers in Iraq's politics for years, but the U.S. killing of an Iranian general and Iraqi militia commander outside Baghdad has added new impetus to the effort, stoking anti-Americanism that Tehran now hopes it can exploit to help realize the goal of getting U.S. troops out of the country. (AP Photo/Darko Bandic, File)

BEIRUT, Jan 23: Iran has long sought the withdrawal of American forces from neighboring Iraq, but the U.S. killing of an Iranian general and an Iraqi militia commander in Baghdad has added new impetus to the effort, stoking anti-American feelings that Tehran hopes to exploit to help realize the goal.

The Jan. 3 killing has led Iraq’s parliament to call for the ouster of U.S. troops, but there are many lingering questions over whether Iran will be able to capitalize on the sentiment.

An early test will be a “million-man” demonstration against the American presence, called for by influential Shiite cleric Moqtada al-Sadr and scheduled for Friday.

It is not clear whether the protesters will try to recreate a New Year’s Eve attack on the U.S. Embassy compound in Baghdad by Iran-supported militias in the wake of U.S. airstrikes that killed 25 militiamen along the border with Syria. Iran might simply try to use the march to telegraph its intention to keep up the pressure on U.S. troops in Iraq.

But experts say Iran can be counted on to try to seize what it sees as an opportunity to push its agenda in Iraq, despite an ongoing mass uprising that is targeting government corruption as well as Iranian influence in the country.

“Iran is unconstrained by considerations of Iraqi sovereignty, domestic public opinion, or legality when compared to the Western democracies,” said David Des Roches, an expert with The Arab Gulf States Institute in Washington. “This is Iran’s strategic advantage; they should be expected to press it.”

A withdrawal of U.S. troops from Iraq would be a victory for Iran, and Tehran has long pursued a two-pronged strategy of supporting anti-U.S. militias that carry out attacks, as well as exerting political pressure on Iraqi lawmakers sympathetic to its cause.

Despite usually trying to keep attacks at a level below what might provoke an American response, Iran-backed Kataib Hezbollah fired a barrage of rockets at a military base in Kirkuk in December, killing a U.S. contractor and wounding several U.S. and Iraqi troops. The U.S. responded first with deadly airstrikes on Iran-affiliated militia bases in western Iraq and Syria, then followed with the Jan. 3 drone attack that killed Gen. Qassem Soleimani, Iran’s most powerful military officer, along with Iraqi militia commander Abu Mahdi al-Muhandis as they left Baghdad’s airport.

The severity of the U.S. response surprised Iran and others, and it had the unanticipated result of bolstering Tehran’s political approach by prompting the Iraqi parliament to pass the nonbinding resolution pushed by pro-Iran political factions calling for the expulsion of all foreign troops from the country. In response, President Donald Trump has threatened sanctions on Iraq.

“What they want to do is get rid of U.S. troops in what they see as a legitimate political manner,” said Dina Esfandiary, a London-based expert with The Century Foundation think tank. “If Iraqis themselves are voting out U.S. troops, it looks a lot better for Iran than if Iran is a puppet master in Iraq trying to get rid of them — and on top of that it would be a more lasting decision.”

The legitimacy of the resolution is a matter of dispute. Not only was the session boycotted by Kurdish lawmakers and many Sunnis, but there also are questions of whether Prime Minister Adel Abdul-Mahdi has the ability to carry it out. Abdul-Mahdi resigned in November amid mass anti-government protests but remains in a caretaker role.

U.S. Secretary of State Mike Pompeo bluntly rejected the call for the troops’ removal, instead saying Washington would “continue the conversation with the Iraqis about what the right structure is.”

Abdul-Mahdi strongly supported the resolution, but since then has said it will be up to the next government to deal with the issue, and there are indications he has been working behind the scenes to help keep foreign troops in the country.

After closed-door meetings with German diplomats last week, German Foreign Minister Heiko Maas said the prime minister had assured them that he had “great interest” in keeping the Bundeswehr military contingent and others part of the anti-Islamic State coalition in Iraq.

The U.S., meantime, said it had resumed joint operations with Iraqi forces, albeit on a more limited basis than before.

Trump met Iraqi President Barham Saleh on Wednesday on the sidelines of the World Economic Forum in Davos Switzerland, and said Washington and Baghdad have had “a very good relationship” and that the two countries had a “host of very difficult things to discuss.” Saleh said they have shared common interests including the fight against extremism, regional stability and an independent Iraq.

Asked about the plan for U.S. troops in Iraq, Trump said, “We’ll see what happens.”

In a sign that bodes well for NATO’s continuing mission in the country, Iraq’s deputy foreign minister went to Brussels last week for talks with Secretary General Jens Stoltenberg on the alliance’s presence in Iraq.

The mixed message of publicly calling for the troops to go but privately wanting them to stay is an indication of Iran’s strong influence, particularly among its fellow Shiite Muslims, Des Roches said.

“For any Iraqi politician in Baghdad — particularly a Shia politician — to defy Iran openly is to risk political as well as physical death,” he said. “So we shouldn’t be surprised if the public and the private lines espoused by Iraqi politicians differ.”

American forces withdrew from Iraq in 2011 but returned in 2014 at the invitation of the government to help battle the Islamic State after the extremist group seized vast areas in the north and west of the country. A U.S.-led coalition provided crucial air support as Iraqi forces, including Iran-backed militias, regrouped and drove IS out in a costly three-year campaign. There are currently some 5,200 American troops in the country.

Even before the drone strike, there were growing calls in nationwide protests across sectarian lines, which started in October centered in Baghdad’s Tahrir Square, for the end of all foreign influence in the country. The demonstrations also targeted government corruption and poor public services.

The rejection of Iranian influence over Iraqi state affairs has been a core component of the movement, and pro-Iranian militias have targeted those demonstrations along with Iraqi security forces, killing hundreds and injuring thousands. Protesters fear that with the focus on the push for the U.S. troop withdrawal in response to the attack that killed Soleimani, they may be even easier targets for those forces and that their message will be lost.

“I think Iraq has had enough of having to deal with the Americans and the Iranians alike,” Esfandiary said. “But the assassination of al-Muhandis, almost more so than Solemani, was such a glaring oversight of sovereignty and of all agreements they had signed on to with the U.S. in terms of the U.S. presence in Iraq, that it has kind of taken some of the attention away from Iran, to Tehran’s delight.”

Friday’s march called for by al-Sadr is expected to redirect the focus onto the U.S. troops. The cleric, who also leads the Sairoon bloc in parliament, derives much of his political capital through grassroots mobilization.

The Tahrir Square protesters initially rejected that call, saying they want the escalating conflict between Iran and the U.S. off of Iraqi soil.

Since then, al-Sadr has reached out to them directly, saying the demonstrations against the government and against the American troops are “two lights from a single lamp,” and it is not yet clear whether that might convince them to participate in the march.

Israel blamed for hit on Iran-backed militia depot in Iraq

JERUSALEM, Aug 23: Israel was responsible for the bombing of an Iranian weapons depot in Iraq lost a month, U.S.... Read More...

Corona-infected lawmakers, too, can cast their votes as PM Oli seeks vote of confidence in parliament tomorrow
6 hours ago