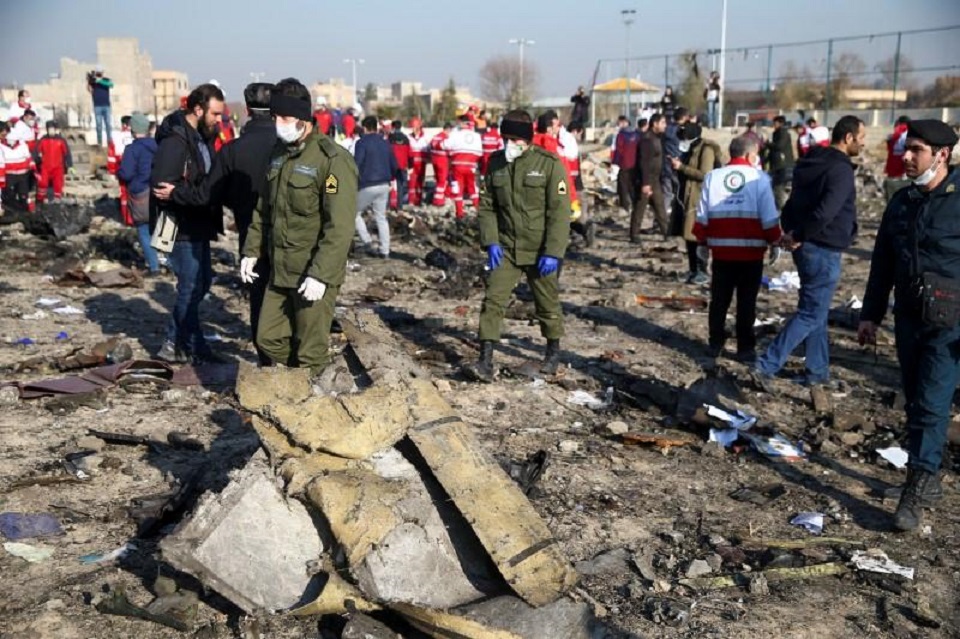 DUBAI, Jan 10: Iran said on Friday it wanted to download black box recordings itself from a Ukrainian airliner that crashed, killing all 176 people aboard, after Canada and others said the plane was brought down by an Iranian missile, probably by mistake.

Iran, which has denied the Boeing 737-800 was downed by a missile, said it could take one or two months to extract information from the voice and flight data recorders. It said it could ask Russia, Canada, France or Ukraine if it needed help.

Tehran also said the probe might take one or two years.

Ukrainian President Volodymyr Zelenskiy said he could not rule out a missile strike but this had not been confirmed. Kiev has said its investigators wanted to search the crash site for any debris of a Russian-made missile used by Iran.

The Ukraine International Airlines flight to Kiev from Tehran crashed on Wednesday, when Iran was on alert for a U.S. military response hours after firing missiles at U.S. targets in Iraq.

The incident adds to international pressure on Iran, after months of tension with the United States and then tit-for-tat military strikes. Washington killed an Iranian general last week in a drone attack in Iraq, prompting Tehran’s missile launches.

On social media, many Iranians voiced anger at the authorities for not closing the airport after Iran’s missile launches. Many passengers were Iranians with dual nationality.

“We prefer to download the black boxes in Iran. But if we see that we can’t do that because the boxes are damaged, then we will seek help,” Ali Abedzadeh, head of Iran’s Civil Aviation Organisation, told a news conference in Tehran.

State television earlier showed the battered black boxes, saying their information could be downloaded and analysed.

Canadian Prime Minister Justin Trudeau, citing intelligence from Canada and other sources, has blamed an Iranian missile for bringing down the plane that had 63 Canadians on board, although he said it “may well have been unintentional”.

“The evidence indicates that the plane was shot down by an Iranian surface-to-air missile,” he said.

Ukraine’s general prosecutor asked Canada “to provide information available to the Canadian side that may facilitate criminal investigations” into the crash.

France’s BEA air accident agency said it would be involved in the investigation. BEA helped analyse data from the flight recorder of a Boeing that crashed in Ethiopia last year.

“It is important that as much clarity as possible is made and as quickly as possible,” French Foreign Minister Jean-Yves Le Drian said.

A U.S. official, citing satellite data, said Washington had concluded with a high degree of certainty that anti-aircraft missiles brought down the plane in error.

The official said the data showed the plane airborne for two minutes after departing Tehran when heat signatures of two surface-to-air missiles were detected. There was an explosion in the vicinity and heat data showed the plane on fire as it fell. U.S. military satellites detect infrared emissions from heat.

U.S. President Donald Trump told reporters he believed “somebody could have made a mistake”.

A defence expert said the plane’s radar signature would have been similar to a U.S. military transport plane.

The New York Times said it had obtained a video appearing to show an Iranian missile hitting a plane near Tehran airport.

Iran denied the airliner had been hit by a missile, saying such reports were “psychological warfare against Iran.”

“All those countries whose citizens were aboard the plane can send representatives and we urge Boeing to send its representative to join the process of investigating the black box,” government spokesman Ali Rabiei said.

U.S., Canadian and French representatives were to travel to Tehran to attend meetings for the Iranian-led crash investigation, Iranian state media reported. Washington and Ottawa do not have diplomatic relations with Tehran.

Iran’s civil aviation organisation said in an initial report less than 24 hours after the incident that the three-year-old airliner, which had its last scheduled maintenance on Monday, encountered a technical problem after takeoff and was heading to a nearby airport before it crashed.

Investigations into airliner crashes require cooperation of regulators, experts and companies across jurisdictions. They can take months and initial reports in 24 hours are rare.

The Transportation Safety Board of Canada said it was making arrangements to tour the site after an Iranian invitation.

The U.S. National Transportation Safety Board (NTSB) said it had designated a representative to join the probe.

Boeing said it would support the NTSB. The company is reeling from two deadly crashes of 737 MAX planes, including the one in Ethiopia, that led to the model’s grounding last year.

The crash plane was built in 2016 and is the prior generation of the 737 before the MAX.

GOMA, Democratic Republic of Congo, Nov 24 : The bodies of at least 18 people killed in a plane crash... Read More...

WELLINGTON, Sept 29: The airline operating a flight that crashed into a Pacific lagoon on Friday in Micronesia now says... Read More...