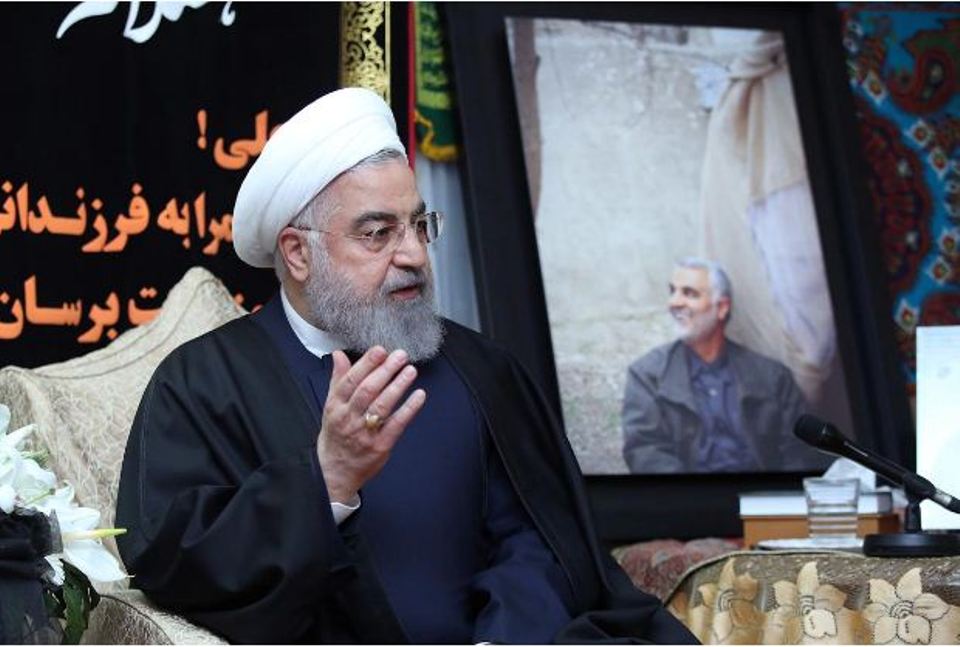 FILE PHOTO: Iranian President Hassan Rouhani visits the family of the Iranian Major-General Qassem Soleimani, head of the elite Quds Force, who was killed by an air strike in Baghdad, at his home in Tehran, Iran January 4, 2020. Official President Website/Handout via REUTERS

Iran’s clerical rulers face challenges in keeping the economy afloat under increasingly tough U.S. sanctions imposed by Washington after it withdrew in 2018 from Tehran’s nuclear deal with world powers. Vital oil exports have been slashed.

“We should not let Trump succeed in creating gaps between the establishment and people ... We should remain united ... Don’t turn your back on (Feb. 21) elections. Let’s have a high turn out,” said Rouhani in a speech broadcast live on his official website.

“We should not let Trump and those terrorists in the White House isolate Iran.”

Iran’s hardline Guardians Council, which vets all election candidates, has disqualified about 9,000 of the 14,000 who registered to run in the elections. Moderates say in most cities they have no candidates to enter the race.

“This parliamentary election is a very important election ... I have written letters to relevant authorities to resolve the issue of disqualifications,” said Rouhani.

“You (hardliners) claim that you will win the election. That is fine, but just let the election be a competitive one.”

Since Iran’s 1979 Islamic revolution, its rulers have swept aside challenges to their grip on power. But the gap between them and the people has widened since last year, when hundreds were killed in anti-government protests. Iran has yet to announce the death toll and rejects figures published by human rights organizations.

Tehran also risks a legitimacy crisis amid mounting public fury and international criticism over the belated admission of blame by Iran’s elite Revolutionary Guards for shooting down a Ukrainian passenger plane by mistake.

Angry Iranians took to streets to protest against the delayed admission by the Guards.

The distrust between the rulers and the ruled, combined with economic hardship, bodes ill for the parliamentary vote in February, when Iran’s rulers typically seek a high turnout to show their legitimacy, even if the outcome will not change any major policy.

“I am calling on our nation to vote,” Rouhani said. “Even if you have criticism over issues and problems, please cast your vote.”

NEW YORK, Jan 9: The election was always going to be about Donald Trump. But over the span of a few... Read More...

Ahead of Trump's visit, Indian city cleans the swamp