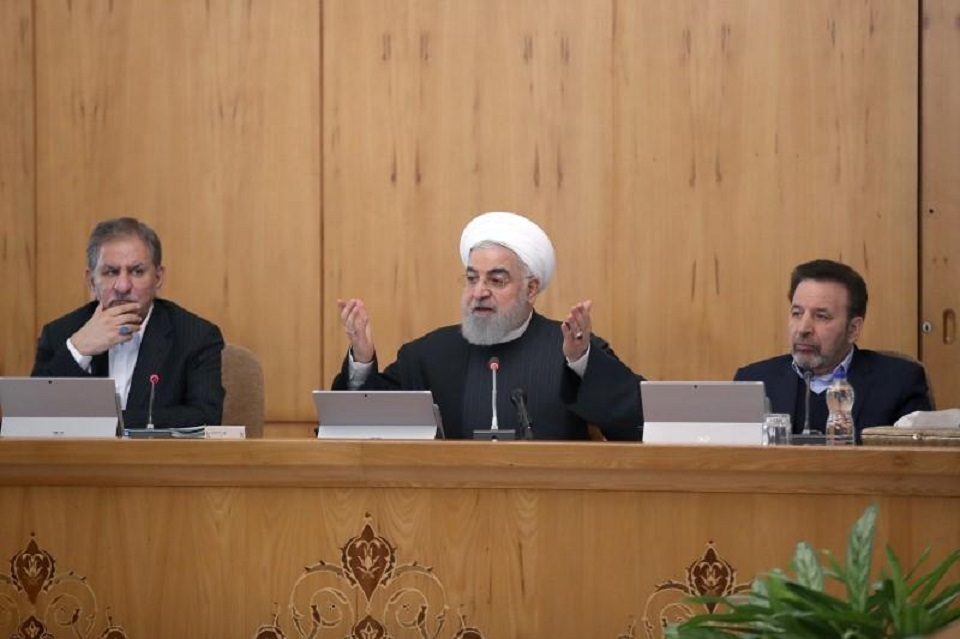 Iranian President Hassan Rouhani speaks during the cabinet meeting in Tehran, Iran, January 15, 2020. Official President website/Handout via REUTERS ATTENTION EDITORS - THIS IMAGE WAS PROVIDED BY A THIRD PARTY. NO RESALES. NO ARCHIVES

British Prime Minister Boris Johnson, who has praised Trump as a great dealmaker, called on Tuesday for the president to replace Iran’s 2015 nuclear deal with major powers with his own new pact to ensure Tehran does not get an atomic weapon.

Trump said he agreed with Johnson that a “Trump deal” should replace the Iran nuclear deal. In a televised speech, Rouhani told Washington to return to the nuclear pact, which Washington abandoned in 2018, under which Tehran curbed its nuclear work in return for the lifting of international sanctions on Iran.

Since quitting the agreement, Washington has reimposed sanctions to throttle Iran’s oil exports as part of a “maximum pressure” policy.

The United States says its aim is force Tehran to agree a broader deal that puts stricter limits on its nuclear work, curbs its ballistic missile programme and ends its regional proxy wars. Iran says it will not negotiate as long as sanctions remain in place.

Tehran has gradually taken steps to reduce its compliance with the deal, which prompted Britain, France and Germany to formally accuse it on Tuesday of violating the terms.

“This Mr. Prime Minister in London, I don’t know how he thinks. He says let’s put aside the nuclear deal and put the Trump plan in action,” Rouhani said.

“If you take the wrong step, it will be to your detriment. Pick the right path. The right path is to return to the nuclear deal.”

Iran denies any intent to acquire nuclear weapons and says its breaches of the deal would be reversed if Washington lifts sanctions. “All of our activities are under the supervision of the International Atomic Energy Agency(IAEA),” said Rouhani.

Foreign Minister Mohammad Javad Zarif told Reuters that the deal was still alive: “No, it’s not dead. It’s not dead,” Zarif said on the sidelines of a conference in New Delhi.

But he told the conference Trump’s withdrawal from the earlier deal made new negotiations with Washington pointless: “I had a U.S. deal and the U.S. broke it. If I have a Trump deal, how long will it last?”

In its biggest step away from the agreement yet, Iran announced on Jan. 5 it would abandon all limitations on enriching uranium set down in the pact.

Britain, France and Germany reacted by activating a dispute mechanism in the deal on Tuesday, which eventually could lead to the reimposing of U.N. sanctions. Iran called this step a “strategic mistake”.

Rouhani upbraided European powers for not standing up to Trump. Iran says the Europeans have reneged on promises to find ways to circumvent the U.S. sanctions.

The flare-up in nuclear diplomacy comes as military confrontation between Washington and Tehran has also reached a new peak.

The United States killed an Iranian general in a drone strike in Baghdad on Jan. 3. Tehran responded a week ago by launching missiles at U.S. targets in Iraq. No Americans were hurt, but hours later Iran shot down a Ukrainian airliner in what its authorities have acknowledged as a tragic mistake, prompting anti-government protests at home.

Rouhani repeated Iran’s longstanding position that peace can come to the Middle East only when the United States withdraws.

“American soldiers today are not secure in the region ... We don’t want there to be insecurity in the world. We want you to go from here, but not with war. We want you to leave the region intelligently and it’s to your benefit,” Rouhani said.

BEIJING, Jan 22:  Beijing launched mass COVID-19 testing in some areas on Friday and Shanghai was testing all hospital staff as... Read More...