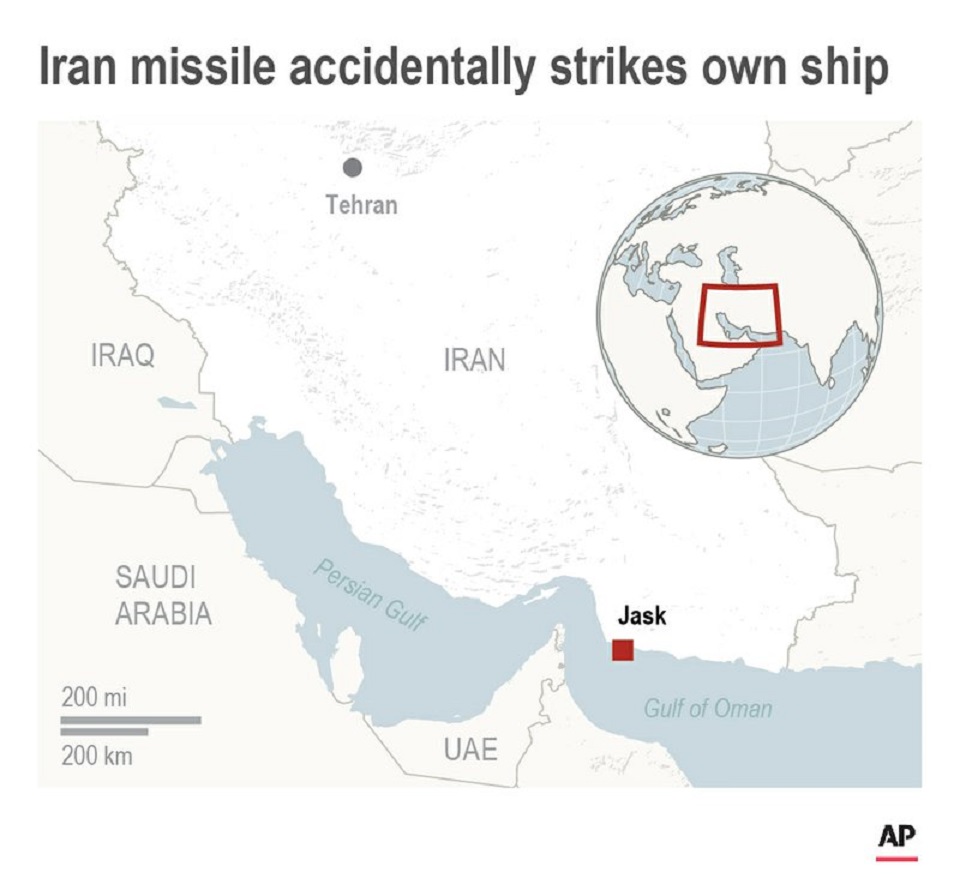 TEHRAN, Iran, May 11: An Iranian missile fired during a training exercise in the Gulf of Oman struck a support vessel near its target, killing 19 Iranian sailors and wounding 15, Iran’s military and state media said Monday, amid heightened tensions between Tehran and Washington.

The statement significantly raised the death toll in Sunday’s incident from what was reported just hours earlier, when Iran’s state media said at least one sailor was killed.

The Konarak, a Hendijan-class support ship, which was taking part in the exercise, was too close to a target during an exercise on Sunday when the incident happened, the reports said. The vessel had been putting targets out for other ships to target. The media said the missile struck the vessel accidentally.

The friendly fire incident took place near the port of Jask, some 1,270 kilometers (790 miles) southeast of Tehran, in the Gulf of Oman, state TV said.

Iranian media said the Konarak had been overhauled in 2018 and was able to launch sea and anti-ship missiles. The Dutch-made, 47-meter (155-foot) vessel was in service since 1988 and had capacity of 40 tons. It usually carries a crew of 20 sailors.

Iran towed the Konarak into a nearby naval base after the strike. A photograph released by the Iranian army showed burn marks and some damage to the vessel, though the military did not immediately offer detailed photographs of the site of the missile’s impact.

Iran regularly holds exercises in the region, which is close to the strategic Strait of Hormuz, the narrow mouth of the Persian Gulf through which 20% of the world’s oil passes. The U.S. Navy’s 5th Fleet, which monitors the region, did not immediately respond to a request for comment.

Iranian media rarely report on mishaps during exercises by the country’s armed forces, signaling the severity of the incident. It also comes amid months of heightened tensions between Iran and the U.S. since President Donald Trump unilaterally withdrew from Tehran’s nuclear deal with world powers in 2018 and imposed crushing sanctions on the country.

It marks the second serious incident involving a misfired missile by Iran’s armed forces this year. In January, after attacking U.S. forces in Iraq with ballistic missiles, Iran’s paramilitary Revolutionary Guard accidentally shot down a Ukrainian jetliner, killing all 176 people on board.