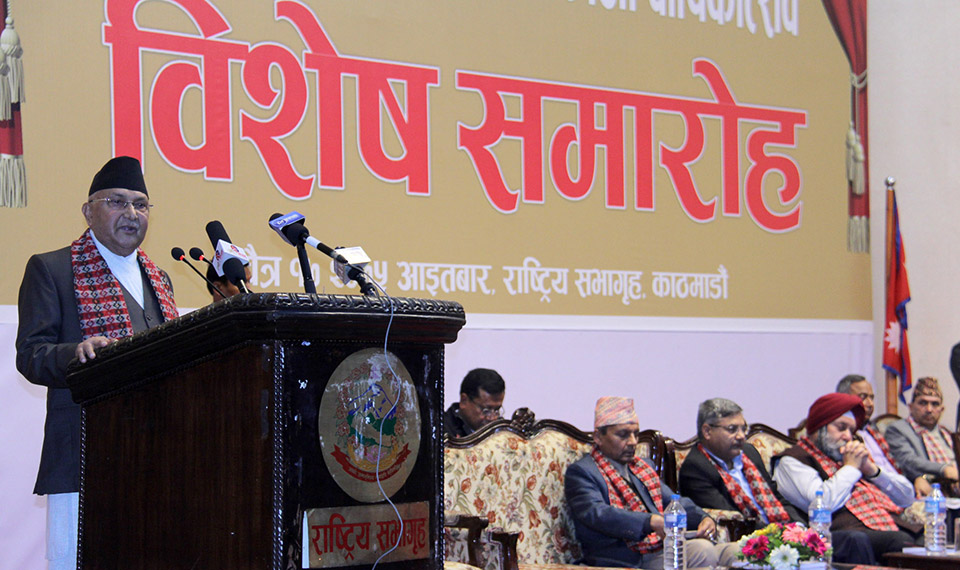 KATHMANDU, March 31: Prime Minister KP Sharma Oli has reiterated that government has centered its attention on building new Nepal with social justice. End of poverty and backwardness, and development of infrastructures are given top priority under the economic prosperity campaign, he added.

PM Oli was speaking at a programme organized on 21st anniversary of Reporters' Club Nepal in the capital city today. "The investment summit concluded on Saturday remained quite encouraging and fruitful for infrastructural development. We successfully held the event. Entire nation stood together. We gave a message of focused direction and one voice," he asserted, adding that as it would take time for Nepal alone to ensure prosperity, efforts were made to seek cooperation from the foreign development partners.

On a different note, he said although the adjustment of government employees was not that easy task, it was accomplished along with new law. As he said the federal, provincial and local levels would work in coordination with the practices as per their jurisdictions.

Similarly, he said the efforts to revive conflict in Nepal were frustrated. "The separatist elements fomenting conflict and division among parties and society are put to an end," the PM underscored.
He urged everyone to develop positive thoughts. "The youths in media and social networking sites need to remind the world that Nepalis pride on the civilized and cultured history and society. Society, history and civilization must not be forgotten," he reminded.

Also the former Prime Minister, Dahal urged the media sector not to involve in the activities enfeebling national unity, stability and development.

Similarly, former Chairperson of the Council of Ministers, Khilraj Regmi, said that the media sector played a crucial role to establish democracy.

Saying economic prosperity can be achieved from investment, not from the speech, Nepali Congress leader Dr Ram Sharan Mahat argued that the projects signed during the concluding ceremony of the investment summit were not new, but already done in the past.

Rastriya Janata Party-Nepal leader Rajendra Mahato stressed that the government should let run the media sector as per democratic norms and values while former President of Non-Resident Nepali Association, Upendra Mahato, said that all should involve in economic prosperity.