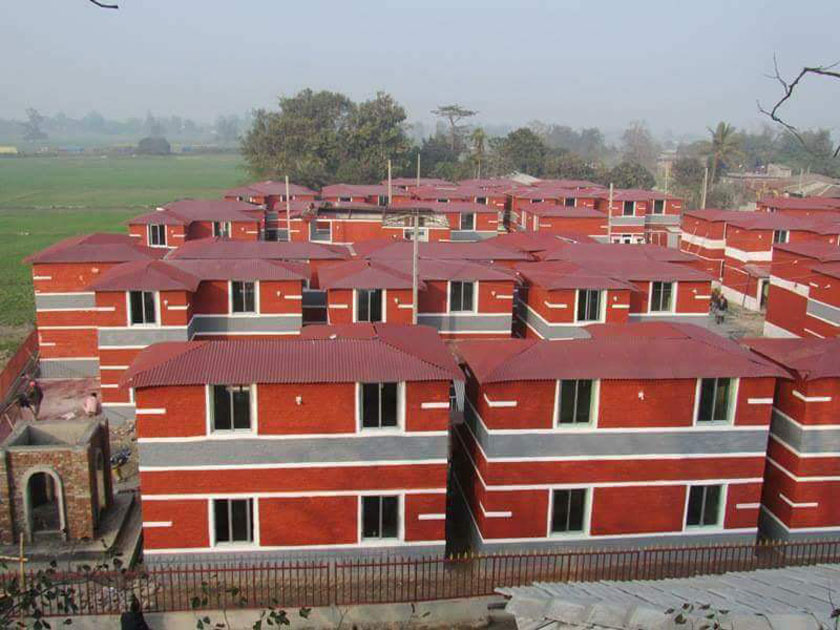 The integrated settlement of Santapur in Rautahat built by Dhurmus-Suntali Foundation.

RAUTAHAT, Jan 24:  Few months ago, acclaimed comedian couple Sitaram Kattel (Dhurmus) and his wife Kunjana Ghimire (Suntali) laid the foundation stone for the integrated settlement in Santapur of Rautahat district. The construction of the settlement has reached the final stage in less than 100 days.

Dhurmus-Suntali Foundation had initiated the construction of the integrated settlement with 47 houses, a primary school, a community hall, a temple and a view tower, especially for the Musahar community. The foundation made the announcement on the occasion of Kattel's birthday on September 20 last year. The construction works begun on October 14.

Stating that he was building houses for the people of the poor and marginalized communities, actor Kattel completed 98 % work of the settlement within 100 days with the help of 261 workers.

With an investment of Rs 50 million, the foundation has been able to make quake resilient, eco-friendly and disabled-friendly houses as per the criteria set by the government. The settlement has two-story houses with two rooms on each floor, a toilet and an attached bathroom. The construction of a school, a temple and a community hall has been completed while the construction of a view tower is in the final stage, informed Kattel.

Despite completing the settlement well ahead of the announced date, the comedian couple is unable to celebrate this joyful moment. The couple collected funds for the project by organizing programs in and outside the country. As they were unable to collect the required amount, they had to take loan of more than Rs 10.3 million for the project. This has worried the couple and they are hopeful that some donors would support them.

Musahars, on the other hand, are elated to see that their dream home get ready so soon. "We had never imagined in our dreams that we would get an opportunity to stay in such well-built houses. This has all been possible due to Dhurmus and Suntali," said Satya Narayan Majhi, coordinator of the management committee of the Santapur Integrated Settlement Project.  According to Kattel, these houses will be handed over to them before February 7.

"We don't need money to help others. It is actually our wish and desire to improve someone's life," said Kattel.

KATHMANDU, August 19:India has offered NRs 400 million in cash and kind as relief for the victims of recent floods... Read More...