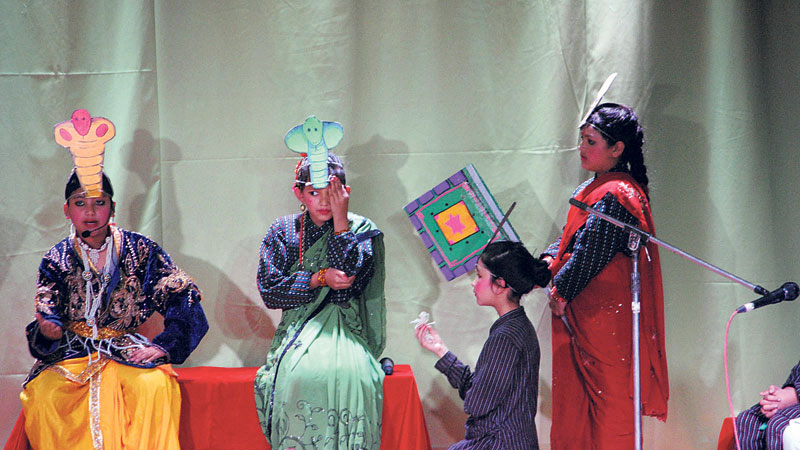 KATHMANDU, Oct 21: Ten schools from Kathmandu and one school from Udaypur are gearing up to show their respective plays at the inaugural Bhadgaun International Children’s Theater Festival that’s set to kick off from October 23.

Hosted by Matribhumi School, a school based in Sanothimi, Bhaktapur, the festival will also feature plays by theater groups from Sri Lanka, Bangladesh, Pakistan and Iran. All the plays will be staged at the school’s theater.

The host Matribhumi School will open the festival with the performance of the play ‘Bise Nagarchi’ written by Bhim Nidhi Tiwari. Set during King Prithvi Narayan Shah’s unification of Nepal, the story depicts the king’s financial struggle to support his crusade to invade Nuwakot.

During this time, he takes the initiative to take suggestions from his own people and that leads him to the house of a tailor called Bise Nagarchi who is renowned as a wise old man in his village. The King’s interaction with Bise Nagarchi serves as the main premise for the play. Tanka Chaulagain from Theater Pragya is directing the play.

“Holding an international theater festival that too targeted for children is rarely done in Nepal. We want this opportunity to act as an exchange of arts and cultural relation,” Chaulagain, who is also heading the festival as the festival director, told Republica.

Chaulagain believes that schools in Nepal can benefit from festivals like these that give them international exposure and a platform to interact with schools within the South Asian region through the form of theater and arts. “In the first edition, our objective is to provide good hospitality to the visiting teams so that in the coming years, we can make the event grander,” he said.

The festival will culminate with the staging of ‘Bahula Kaji ko Sapana’ by St George International School on Friday, October 28.

Tickets are priced at

KATHMANDU, May 27: The Second Kathmandu Aksharaa International Children’s Theater Festival 2018 had its opening ceremony on Saturday on the premises... Read More...

Students off to Odisha for theater festival

KATHMANDU, Sept 7: A team of Nepali students on Monday left for India to take part in the International Theater Festival. Read More...