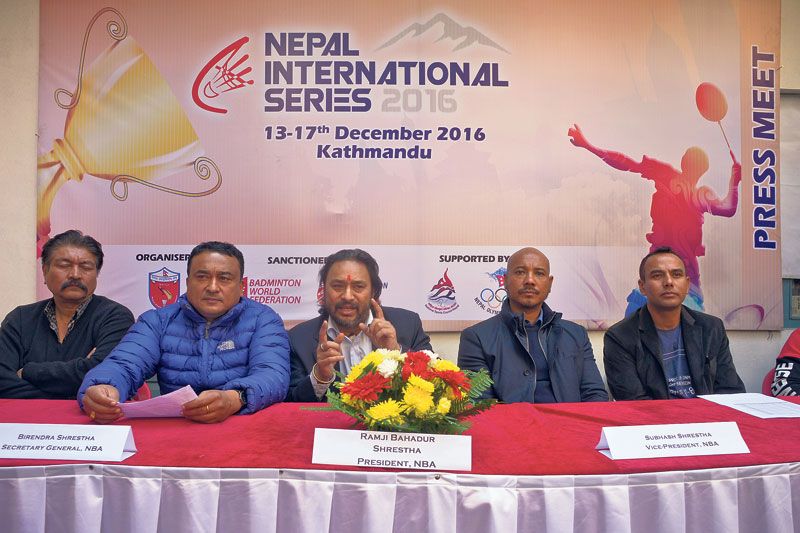 Officials of Nepal Badminton Association during a press meet of Nepal International Series 2016 badminton tournament in the capital on Sunday. Photo Bijay Gajmer/Republica

KATHMANDU, Nov 28: Nepal Badminton Association (NBA) is set to organize the BWF International Series in Kathmandu from December 13 to 17 at the covered hall of National Sports Council. This is the sixth international badminton tournament that NBA is organizing in Nepal. Earlier, it had organized the same series back in 2008.

Organizing a press conference in the capital on Sunday, NBA informed that 94 players from 13 countries will vie in the men’s and women’s singles, doubles and mix doubles events.

According to Shrestha, a player will be allowed to take part in up to three events. He also informed that the winner of each event will be awarded US$ 600.

According to the organizer, it has openly invited the interested players from all countries to take part in the tournament.

NBA member Deepak Thapa informed that they are going ahead with the tournament despite not having any sponsor yet. “We are hopeful that the business entrepreneurs will fulfill their corporate social responsibility,” said Thapa.

Meanwhile NBA President Shrestha said that badminton will scale new heights after hosting the international event. He also informed that the popularity of badminton is continuously increasing in Nepal.

According to Shrestha, the association’s aim is not only to organize events but also to help Nepali players improve their level and to win medals. “We also want our players to win medals at the home court. They have already started training since one month with the target of winning medals,” said Shrestha.

Shrestha also informed that the Badminton World Federation (BWF) and Badminton Asia have given Nepal the permission to host this event. NBA has also got support from the National Sports Council (NSC) and Nepal Olympic Committee.

Shrestha confirmed that 22 Nepali players - 12 men and 10 women - have been selected for the series on the basis of their rankings.

Shrestha also informed that the top Indian players will also take part in the event. “Although the top ten players from India won’t take part in the tournament, players below them will come to Nepal,” said Shrestha.

Sukilumba airport to come into operation soon
10 minutes ago

Govt not in favor of a complete shutdown: Health Minister Khatiwada
2 hours ago