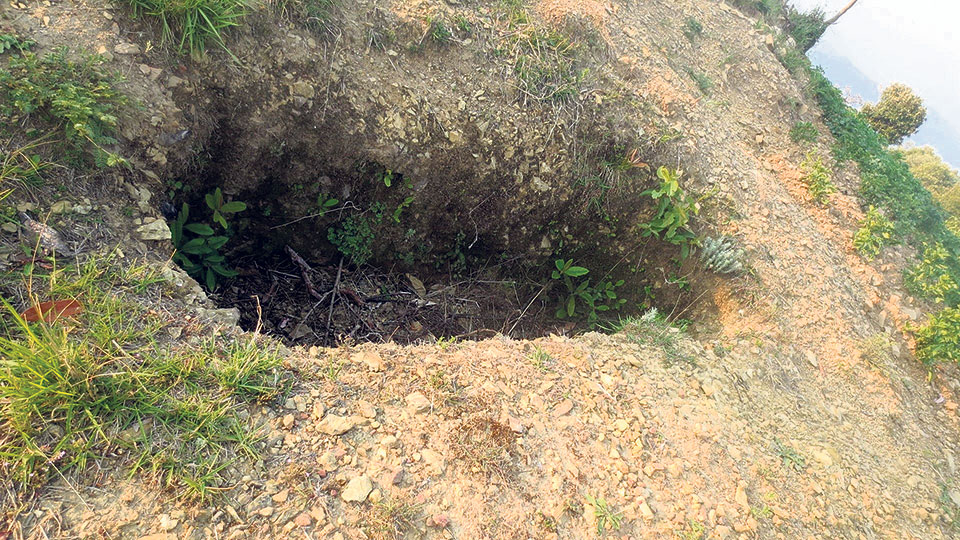 One of the many trenches dug during the insurgency era in Rankot Gaurichaur of Paribartan Rural Municipality-5.

ROLPA, June 1: It has already been 12 years since the decade-long Maoist insurgency ended. However, trenches around villages of Rolpa district that were dug during the armed rebellion still take the residents down memory lane of the guerilla warfare, in which the state, rebels and the general public had suffered heavy casualties.

Maoist rebels had made the villagers dig dozens of trenches for them to fight against ‘Indian expansionary attempts’. After all these years, such trenches can still be found in many locations of the district. Some of those pits have traces of military exercises that had taken place during the war.

Trenches formed an important part in the Maoist’s ‘tunnel war’. Locals said the sight of such tranches still reminds them of the bloody war waged against the state by the then rebels.
Gopal Bahadur Oli, a local teacher, recalls gathering a group of 15/16 villagers and digging 91 trenches in two weeks during the warfare. Whenever he sees the trenches, he cannot stop thinking about those events.

“They are a reminder of our big expectations at that time,” said Oli. “However, looking back, those activities now seem totally pointless. Why did we take that trouble? After all, nothing changed at the end.”

Another local shared how they created trenches in shapes of English alphabets C, T, Y, V and O.
Despite bitter memories, some villagers have called for the conservation of the historic trenches stating that they are a big part of the country’s history. Some trenches have already been filled, with only traces to be found. Some villages including Rankot Gorichaur of Pariwartan Rural Municipality-5 have started conserving such war-era structures.

“The government has not given priority to the conservation of the insurgency-era trenches and artifacts. But we’ll do our best to conserve it,” said Rankot ward chairman Sukra Bahadur Budha.
According to him, 11 people were killed in the ward, out of which seven are martyrs. With the objective of preserving the wartime structures, the ward is also building a martyrs memorial with an investment of Rs 800,000. Ward Chairman said two of the victims were made disappeared by Nepal Army and the memorial would be built in their memory.

Dozens of encounters between the Maoist rebels and Nepal Army personnel had taken place in Rankot Gaurichaur. Apart from the trenches, the village has many wartime memories including a bullet stuck in the wall of a health post. There are living memories as well. For instance, there are many households who have wounded members after receiving bullets during the war, or whose family members were killed or disappeared during the insurgency.

With the successful conclusion of local elections and election of their own representatives, many of the victimized families had carried big hopes of change. However, their hopes are gradually turning into disappointment as the wait for justice and other programs for the victims have not been delivered.

ROLPA, August 15: Authorities of Rolpa Municipality have decided to validate decisions taken by the then 'people's government' during conflict... Read More...

ROLPA, Jan 25: Shortage of drinking water has been seen in Rolpa in the absence of timely maintenance of water... Read More...

ROLPA, Aug 4: While Chairman of the CPN (Maoist Center) Pushpa Kamal Dahal was being elected prime minister for the... Read More...