Why Instagram has kind of taken over our lives

Kussum Ghimire spends an average of three hours on Instagram every day. Ghimire, who is taking a gap year and preparing to study medical science for her undergrad, mostly uses the site to either connect and communicate with the people she knows or to look into news, new discoveries and trends in areas she’s interested in like, poetry, illustration, music, science and medicine, travel, and stand-up comedy.

“What makes using Instagram convenient is the fact that you can be very particular about the content you view,” says Ghimire, adding that unlike other social media sites, you aren’t required to view tagged posts or posts liked by someone else and can control what you see on your feed. She claims that even though she has accounts on other social media sites, Instagram is the one she prefers to use.

Like Ghimire, photographer Sanjay Rauniyar also likes that you can be selective with the content you come across on Instagram. Other than that, the 24-year-old also thinks that because the site is very easy to navigate and has interesting additional features like stories and IGTV, people can use it in lots of ways and it has something that captures everyone’s fancy.

17-year-old high school student Anagat Pokharel brings up the other side of being selective when it comes to Instagram. He mentions that users can choose who can follow them and see the content they upload on the site. “I like my privacy and being able to control who sees the pictures and videos I upload is very important to me,” he explains. He adds that even though he follows a lot of public pages and celebrities on the social media site, he is actually quite picky about what or who he follows.

Ghimire too confesses that she looks for quality content and cohesion before deciding on which page to follow. She states that in the past few months, she has felt that a lot of Nepali brands, pages and influencers have put in a lot of effort to post quality content. One such local page that has a good Instagram feed, according to Ghimire, is @borastudionepal. The account is managed by Meena Gurung, founder and designer of Bora Studio which is a sustainable and ethical Nepali clothing and accessories brand.

Gurung says she puts in a lot of thought and effort into all of Bora Studio’s Instagram posts but claims that she hardly uploads two posts a month on the brands page. She reveals that she views Instagram as a platform that has the potential to shape how people perceive and connect with a brand.

“Most of the things I post on Bora Studio’s Instagram page aren’t planned. If I feel like there’s something my customers should know about – like the behind the scenes production process or new products – I take a picture or video (mostly for stories) then and there,” says Gurung. She further explains that she carefully positions what she has to capture, meticulously edits the photo and thoughtfully writes a suitable caption before posting it on Instagram.

Another Nepali account that was mentioned by most people this scribe spoke to was @pepppyowl, a fashion and lifestyle based Instagram account run by blogger and stylist Rhea Pradhan. Pradhan claims that, besides showcasing her own work, Instagram is very important in her line of work to build an online presence and connect with people. She is very particular about what she posts and all of her uploads are planned at least a week in advance. Every photo she uploads is shot and edited by [her friends who are] professional photographers.

“Since Instagram is a visual medium, you have to make sure the content you upload is attention grabbing and pleasant to look at. You also have to create a cohesion between your posts and stick to a niche,” says Pradhan who is currently in her final semester of Media Studies at Kathmandu University. She claims that because everyone scrolls through tens – if not hundreds – of accounts everyday, you have to make sure your account and posts stand out in order to capture people’s attention.

Stylist, makeup artist and fashion designer Sadhana Ranabhat also uses her Instagram account like Pradhan does – to showcase her work. The 23-year-old fashion design graduate mentions that she views it as a work portfolio and rarely puts any information about her personal life. Personally, she likes following fashion, lifestyle, travel and news Instagram accounts that have an orderly feed, creative concepts, and provide value to the followers in some way. She herself works hard to curate a feed she is proud of and is very conscious about the layout as well.

Karma Yangzen Lama – who runs her personal account @karma_lala14 – is arguably one of the most followed Instagram influencers of Nepal. The 18-year old, who is pursuing a bachelor’s degree at IEC College, become popular on Instagram a few years ago because of her interesting stories and posts. “I’m more interested in the stories people post and follow accounts that have fascinating stories. I don’t like it when people post similar stories every time. I need variety,” says Lama whose own stories capture fun and entertaining moments of her day.

Another way this visual focused social media site is being used is to create niche communities amongst people who like similar things. 21-year-old K-pop fan Ananya Poudel claims that Instagram has helped her connect with other people all around the world who also enjoy K-pop. She states that she follows a bunch of fan accounts, fan sites, and accounts that sell K-pop albums and merchandise. “I’m not very active on other social media sites but Instagram lets me experience fan culture at its best,” she adds.

Pokharel, who is a huge anime and manga fan, also has a similar story to tell. He reveals that he follows tons of fan pages that keep him updated on new episode releases, review animes and mangas he hasn’t watched yet, and post fan art featuring his favorite characters.

20-year-old Shriya Poudel, who is pursuing a bachelor’s degree in Chemistry at Jacobs University in Germany, states that she primarily follows travelers and influencers on Instagram. Poudel loves to travel and reveals that she gets all her travel-related information from these pages and influencers she follows. She further mentions that Instagram is one of her most used applications and social media sites and she believes people her age use Instagram to escape from their hectic lives and societal boundaries.

Pradhan, whose followers only keep increasing, believes Instagram launched at the right time – just when people were accepting the idea of being connected globally through social media sites and applied the right strategy [to focus on visuals]. “It made it possible for likeminded people to connect without really having to connect,” she concludes. 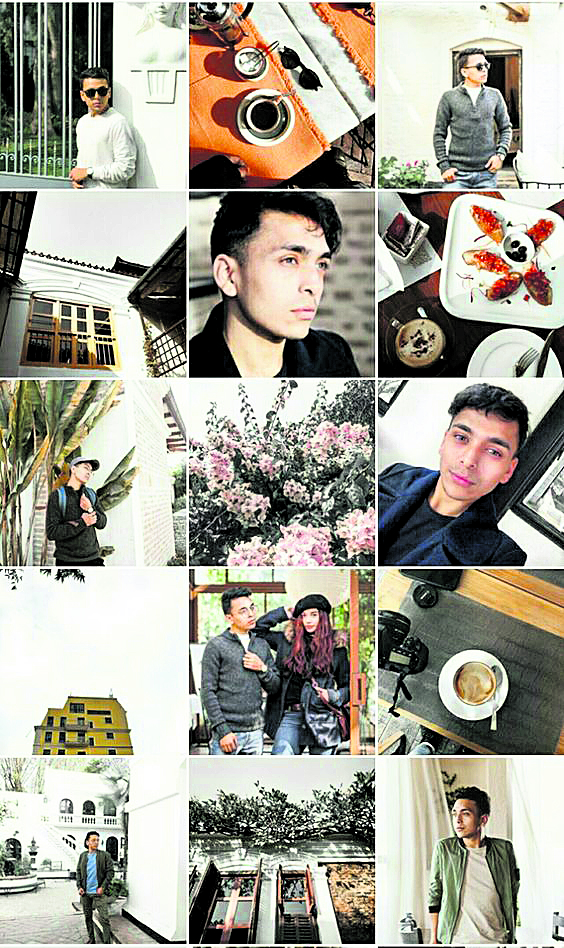 The world has gone digital. Everyday people come up with new career paths that are run solely through the internet,... Read More...