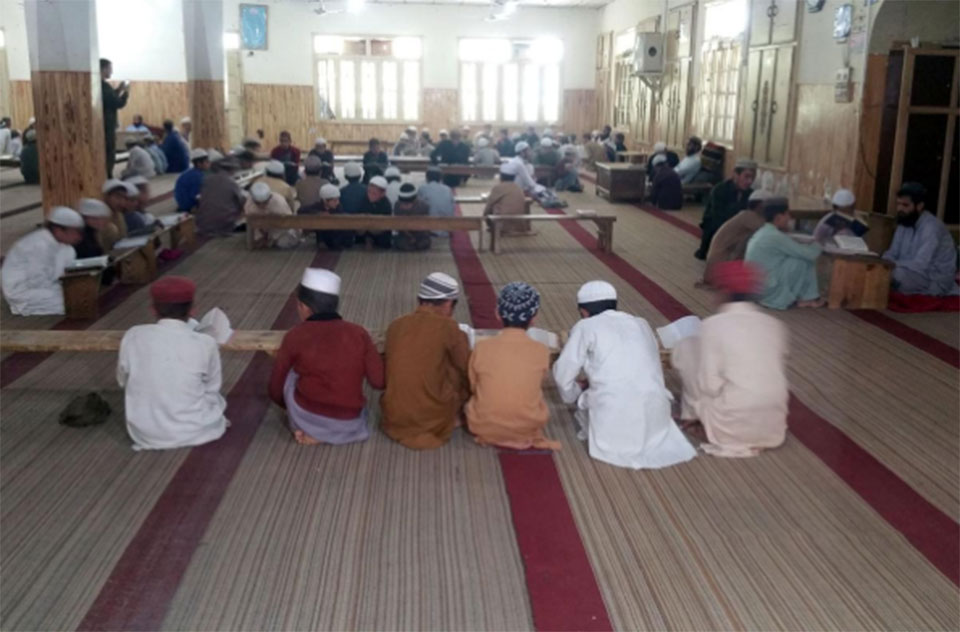 Students recite verses from the Koran at a madrasa situated near an impact site, after Indian military aircrafts struck on February 26, according to Pakistani officials, during a trip organised by the government, in Jaba village, near Balakot, Pakistan, April 10, 2019. Picture taken April 10, 2019. REUTERS/Salahuddin

JABA, April 11: A madrasa, or Islamic school, on a remote hilltop in northeastern Pakistan that was the target of an Indian air strike just over six weeks ago is still not ready to give up its secrets.

For the first time since the Indian government said it had killed hundreds of “terrorists” and their trainers and associates in the school’s compound, Pakistani authorities on Wednesday allowed a group of journalists working for foreign news organizations, and foreign diplomats based in Islamabad, access to the site.

The expectation among some of the visitors was that it might help to settle a number of mysteries about the attack. In particular, whether, as India had said, it was a huge success and took out a major militant training camp or whether - as Pakistan says - India’s warplanes missed the madrasa compound completely and hit surrounding hills instead. The difference - as many as 300 dead militants or no fatalities at all.

There was also the question about whether the madrasa, one of more than 30,000 across Pakistan where children of all ages are taught to memorize and recite the Koran, was a cover for the Islamist group Jaish-e-Mohammed (JeM), which was allegedly using the site to train fighters to infiltrate Indian-controlled Kashmir.

JeM claimed responsibility for a suicide car bomb attack in Kashmir that killed 40 Indian paramilitary police on Feb 14, triggering the Indian attack and the worst hostilities between the two nuclear-armed nations for many years.

But the journalists and diplomats, most of whom spent well over an hour climbing steep slopes to get to the madrasa in the Jaba village area near the town of Balakot, didn’t get enough time to make any kind of informed assessment.

They were mostly restricted to looking around the madrasa’s main building. They were hurried away by the army, which organized the trip, after less than half an hour. Those arriving by vehicle had even less time.

The interactions with teachers and about 100 children at the madrasa - from the very young to older teenagers - were limited. The visitors were shown a group of children learning passages from the Koran partly by rocking their heads back and forward in rhythm. One teacher said he had worked at the madrasa for six years.

TOO LITTLE, TOO LATE

At least three of the diplomats, who were mainly from Western countries and the Middle East and included some military attaches, said it was very difficult to draw any firm conclusions because of the six-week delay in gaining access and the restricted time allowed to look around.

“I don’t think the site was hit but I still can’t be 100 percent after today,” said one Western diplomat. “As to whether JeM were here - they may have been but I can’t determine that from this either.”

The diplomats declined to be named given the sensitivity of the subject.

When asked after the visit about the limitations, armed forces chief spokesman Major General Asif Ghafoor said Pakistan had nothing to hide and that if schedules allowed, journalists could in the future come and spend a night or even a month at the site.

He denied that the madrasa had recently been used by JeM. If there was a relationship it was a long time ago, he suggested.

On the trek up to the compound, past small sheep and goat farms and through pastoral scenery on a beautiful spring day, journalists and diplomats were shown craters that the allegedly wayward missiles had created on the surrounding hillsides.

Indian Foreign Secretary Vijay Gokhale said on the day of the strike, Feb. 26, that “a very large number of JeM terrorists, trainers, senior commanders, and groups of jihadis who were being trained for Fidayeen action were eliminated” in the attack. Fidayeen is a term used to describe Islamist militants, or jihadis, on suicide missions.

Other Indian officials have come up with similar claims but despite repeated requests from journalists, the Indian government has not produced evidence that a camp was destroyed or that any militants were killed.

The claims have been an issue in India’s general election, which started on Thursday. Senior government officials - including Prime Minister Narendra Modi - have attacked opposition politicians who ask for evidence as unpatriotic.

Satellite pictures have indicated that the main structures on the hill top appear to be in similar condition after the attack as they were before.

Those visiting the site on Wednesday didn’t see any signs that there had been significant building work to either clear structures or erect new ones. And the vegetation didn’t appear to have suffered the stress that might be expected from a missile attack.

A series of Indian media reports claimed in March that the Indian jets had used smaller precision-guided bombs with warheads that were capable of penetrating a building and then killing its occupants but without blowing up the structure.

Ghafoor told the foreign journalists earlier in the week that he couldn’t understand how the idea of a missile that blows up inside buildings like those at the madrasa without hurting the structure could carry any credibility. He challenged India to show how that could be done.

The main madrasa building itself doesn’t appear to be reinforced in any major way - it has a metal roof with some modest wooden beams.

Pakistani Prime Minister Imran Khan, meeting foreign correspondents in Islamabad on Tuesday, asked if there had ever been a target.

“We are still in two minds,” he said. “Did they intend to hit a target or was it just symbolic?”