Infographics: Which nations have the highest percentage of people aged 60+? 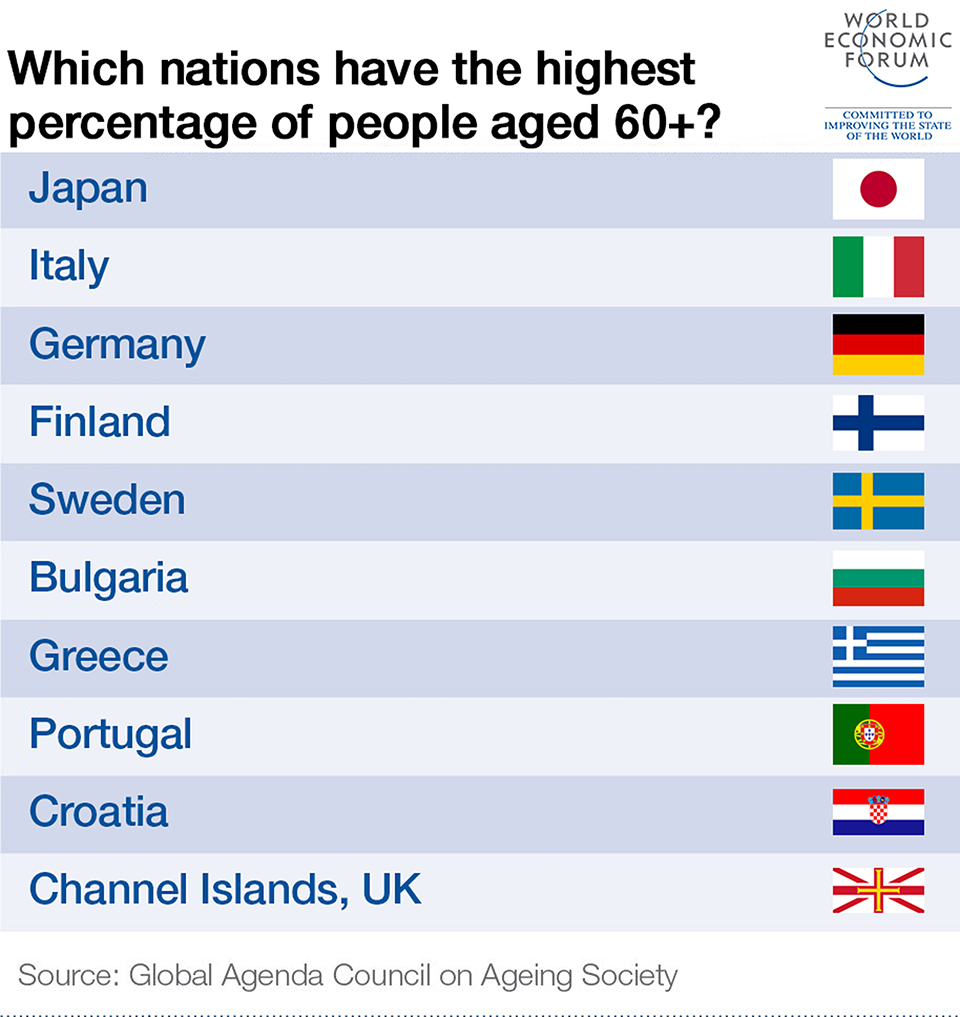 Which nations have the highest percentage of people aged 60+?

Japan’s fertility problem hit a new low last year: 2016 was the first year since 1899 that fewer than one million babies were born in the country.

Japan’s National Institute of Population and Social Security Research predicts that the country’s current population of 127 million will decline by nearly 40 million by 2065.
Demographic experts point to younger generations’ waning interest (and ability) to start families, along with low immigration rates, as the primary causes of the decline.

Mary Brinton, a Harvard sociologist who studies Japan, says Japan’s work culture often prizes long hours at the expense of an active social life. For several decades following World War II, men worked while women raised children. Now, as more women enter the labor force, both sexes are finding it difficult to start a family of their own. “This is death to the family,” she tells Business Insider.

Other countries face similar problems, including the US, Denmark, China, and Singapore — with fertility rates of 1.87, 1.73, 1.6, and 0.81, respectively — although Japan’s case may be the most severe.

The new data suggests other bleak milestones, namely, that Japan’s population could fall below 100 million by 2053. This cuts across the federal government’s goal of maintaining a population of at least 100 million into the 2060s, Japan Times reports.
Aging also plays a considerable role in Japan’s dwindling population.

For instance, deaths have outnumbered births for the last few years—a trend officials expect to continue for the foreseeable future. By 2060, when estimates say the country will have just 88 million people, roughly 40 percent of those people will be older than 65.
The current proportion is 27 percent.

Prime Minister Shinzo Abe has enacted policies to help people achieve a better work-life balance, such as encouraging companies to offer shorter work hours. But many experts fear the culture of work is too engrained to make significant impacts.

“What the government has to do, and there’s no way around it, is subsidize the cost to firms of hiring women,” Yale politicial scientist Frances Rosenbluth told Business Insider in February. “This is a hard thing for center-right government to do, because it’s socializing the cost of family work.”

Infographics: Countries with most people living in slavery

Modern slavery is a brutal reality around the world. The 2016 Global Slavery Index published by the Walk Free Foundation... Read More...

Infographics: 59 countries have done it already

America could make history by electing its first female president—but many other countries around the world have already reached the... Read More...