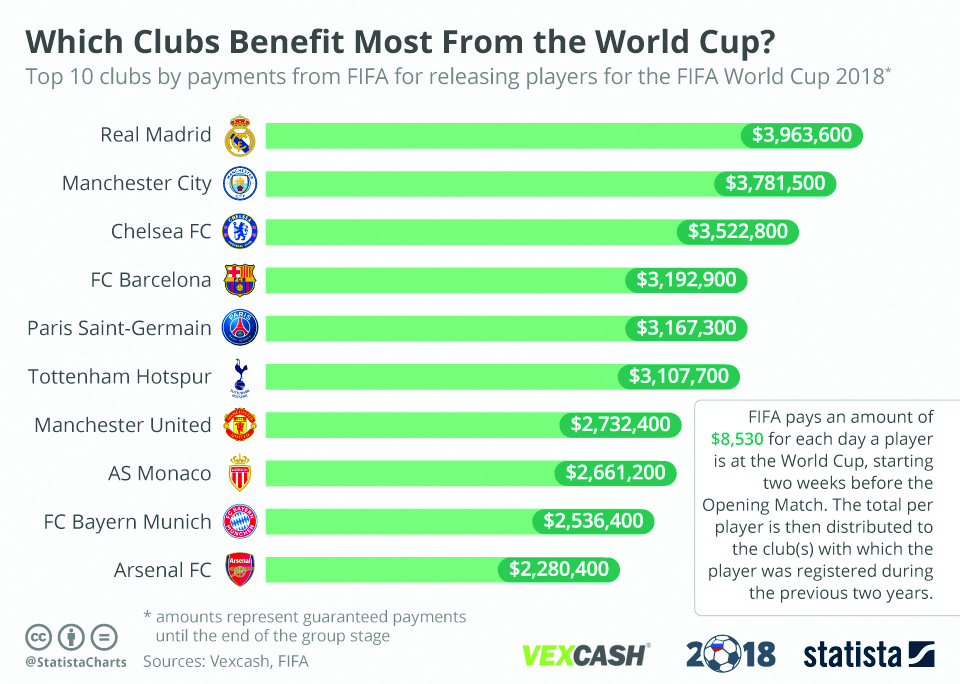 Considering its global reach, it doesn’t come as a surprise that the quadrennial FIFA World Cup is FIFA’s biggest source of income. According to its latest financial report, football’s international governing body expects revenues of nearly $3.9 billion this year, the lion’s share of which is generated selling media and marketing rights related to the World Cup.

But what about the clubs who employ the players competing at the tournament? After all, they are the ones who pay the players’ lofty salaries and the ones who pay the price if a player suffers an injury at the World Cup. They are paid $8,530 for each day a player is at the World Cup, starting two weeks before the Opening Match and ending one day after the respective nation’s exit from the tournament.

As the following chart, based on calculations made by Vexcash, illustrates, those payments add up to a nice sum for the biggest clubs in the world. However, considering that many top players get paid much more than $8,530 a day, it’s safe to assume that the $3.96 million Real Madrid will be paid for its players competing in Russia won’t be a cause for celebration in the Spanish capital. In total, FIFA will be paying out $209 million under the “Club Benefits Programme” this World Cup, which doesn’t seem like a lot considering the amount of money FIFA stands to make.

A combined “United” bid from the United States, Canada, and Mexico has won the right to stage the biggest World... Read More...

Infographics: Will the World Cup in Russia be safe for visitors?

Ever since Russia was announced as the host of the 2018 FIFA World Cup, there have been fears about safety... Read More...