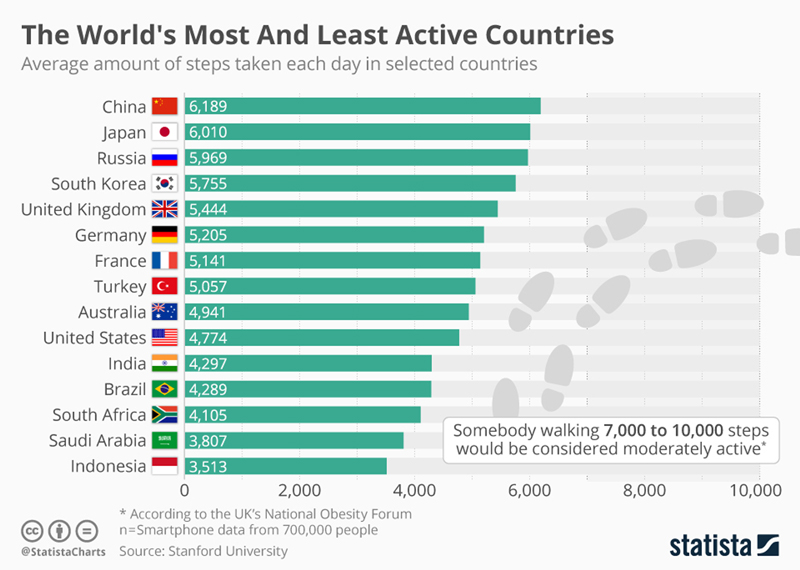 Have you ever wondered where people tend to walk the most every day on average? Scientists at Stanford University have answered this question by collecting data on a “planetary-scale” to determine how active people are in different countries. While Japan’s Ministry of Health, Labour and Welfare recommends a person walk 8,000 to 10,000 steps a day, the UK’s National Obesity Forum says somebody walking 7,000 to 10,000 would be considered moderately active.

The research found that on average, people walk 4,961 steps a day, far less than the recommended amount above. People in Hong Kong are the most active with 6,880 steps a day while they are least active in Indonesia, averaging a mere 3,513. The infographic shows the average steps taken in a selection of larger countries included in the research. In China, people average 6,189 steps a day while in Japan, that number is 6,019. Americans are less active and can be found in the middle of the pack, averaging 4,774 daily steps.

A recently released World Economic Forum report has found that the global economy is recovering well nearly a decade on... Read More...

Infographics: The world's most and least peaceful countries

The world's most and least peaceful countries ... Read More...

Infographics: The countries most and least optimistic about 2017

The countries most and least optimistic about 2017 ... Read More...