Canada’s Prime Minister Justin Trudeau has made gender inclusivity a priority. After coming to power last year, he appointed an equal number of men and women to his team of ministers. And as a result, Canada has the world’s first gender-balanced cabinet.

Now Canada is making the lyrics of its national anthem gender-neutral. Under a bill passed in the country’s House of Commons, the English version of O Canada would be changed to replace the words “in all thy sons command” with “in all of us command”.
Speaking before the vote, Status of Women Minister Patty Hajdu said the change was an important step to ensuring Canada becomes more inclusive towards women.

“I think it’s really important as a very strong symbol of our commitment to gender equality in this country,” she said.

The new bill follows a failed attempt in 2010 to adjust the anthem’s lyrics—the then Conservative government had to drop the idea following a public outcry.

Canada isn’t the first country to update its national song to include references to women as well as men. In 2012, Austria changed words in the first verse of its anthem from “great sons” to “great sons and daughters” and in the third verse “fraternal choirs” is now “jubilant choirs”.

However, other bids to change gendered language in national songs – some of which are more than 150 years old – have been unsuccessful. In 2011, a Costa Rican woman failed to convince the Supreme Court that her country’s anthem was sexist.

But Canada’s move may prompt other countries to look more closely at gendered language in their national anthems.

The final verse of the Star Spangled Banner, which is often skipped in performance, says “be it ever when freemen shall stand”.

In some countries’ national anthems, like in O Canada, lyrics refer to “men” and “sons” and leave out women and daughters. The Song of the Italians, for example, has the lyric: “every man has the heart and hands of Ferruccio”.

To determine how sexist various countries’ national anthems are, The Guardian has analyzed lyrics from a small selection of anthems, looking at whether the language is more masculine, feminine or gender neutral. 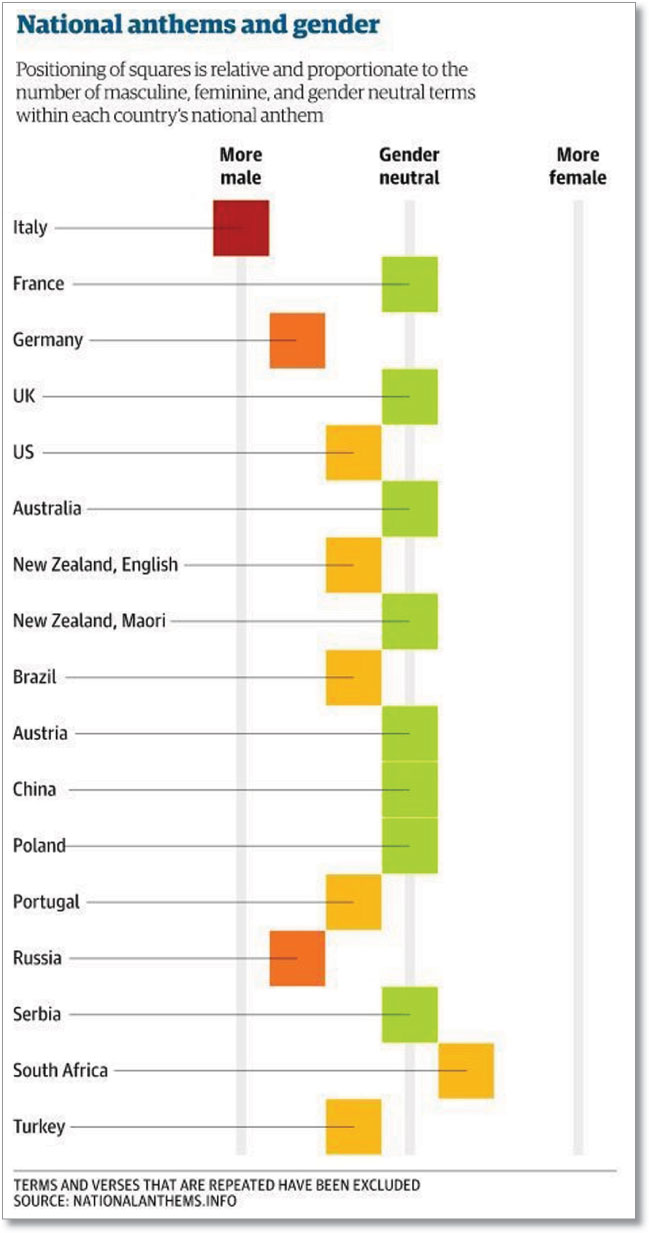