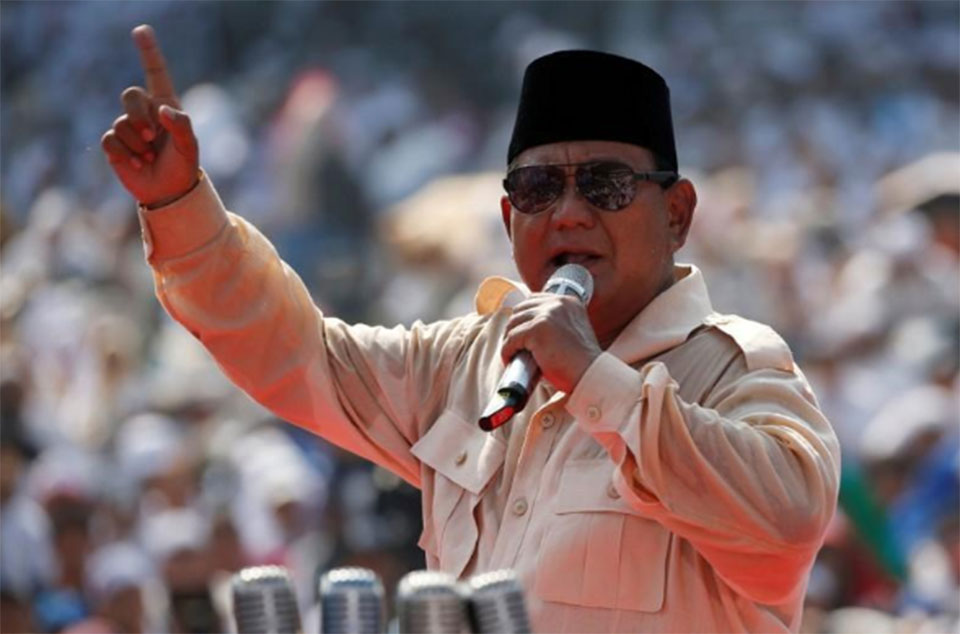 JAKARTA, April 14: At a recent election rally, former Indonesian general Prabowo Subianto repeatedly banged his hand on a podium while urging the boisterous crowd to defend the country against foreign interests.

Such fiery rhetoric, a strongman image, and strong ties with hardline Islamist groups have bolstered support for Prabowo, 67, who is taking on incumbent President Joko Widodo in a battle on Wednesday to lead the world’s third-largest democracy.

Most opinion polls show Widodo has a double-digit lead but some recent surveys have shown Prabowo catching up.

Critics say Prabowo’s campaign message, much like U.S. President Donald Trump in 2016, played up potential threats to Indonesia. In speeches, he often says the country is on the verge of fragmentation, at the mercy of unspecified foreign powers.

“The Indonesian motherland is being raped,” Prabowo told another massive rally in a stadium in central Jakarta, as tens of thousands of supporters, many dressed in white Islamic clothes, chanted his name.

A former special forces commander in the military, Prabowo comes from an elite political family. His father was one of Indonesia’s most prominent economists, serving in the cabinets of both presidents Sukarno and Suharto.Election officials say Prabowo declared personal wealth of 1.9 trillion rupiah ($135 million) in August, versus Widodo’s 50 billion ($3.6 million), according to news website Detik.

Prabowo has long harbored ambitions for the top job, but a lack of support meant he sat out the 2004 election and ran as vice president on a losing ticket in 2009.

It was only by 2014 that, as head of the Great Indonesia Movement (Gerindra) party, he gained enough support to run and came within six percentage points of beating Widodo.

This time, Prabowo has consolidated support from hardline Islamist groups such as the Islamic Defenders Front (FPI) and religious parties, fuelling concern about the influence of conservative Islam on future policy-making should he win.

“In the scenario of a Prabowo presidency, he will have to reward his supporters and the political Islam side will take credit for his victory,” said Achmad Sukarsono, a political analyst at Control Risks.

“Having said that, he understands the concerns of the influence of Islam and will try to balance that with his own and his Christian family’s opinions.”

Prabowo is likely to offer opportunities for supporters in the country’s budding sharia economy, he added, such as curbing businesses that offend Islamic sentiments, like alcohol or sensitive publications.

Prabowo has denied accusations of wanting to turn Indonesia into a caliphate, and says the diversity of religion in his own family is proof that he will uphold the official secular state ideology.

Prabowo was accused of human rights abuses during his military career, chiefly over unrest that brought down his former father-in-law and long-serving autocratic leader Suharto in 1998 and led to his discharge.

He has repeatedly denied the allegations or said he was following orders.

Just days ahead of the vote, Prabowo and his campaign team have cast doubt on the credibility of voter lists and the integrity of election machinery, vowing to contest the results and even mobilize street protests if they discern any cheating.

In 2014, Prabowo refused to concede defeat for two weeks, even though early results showed Widodo had won. He contested the official results in the Constitutional Court, which confirmed Widodo’s victory.

The campaign has also said internal and external poll numbers give Prabowo a clear lead, but has declined to explain its methodology.