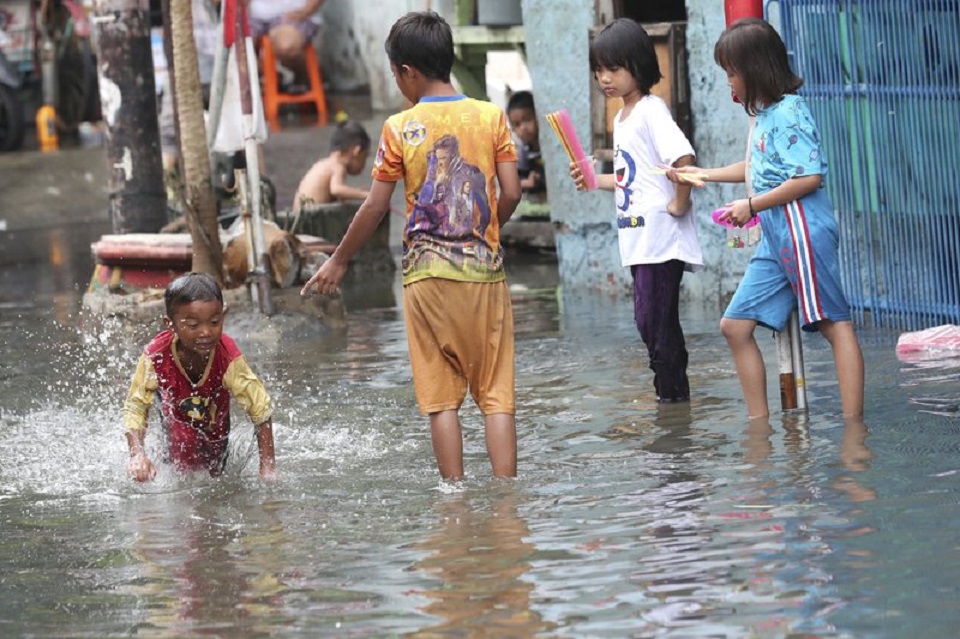 Children play on a flooded street in Jakarta, Indonesia, Sunday, Jan. 5, 2020. Landslides and floods triggered by torrential downpours have left dozens of people dead in and around Indonesia's capital, as rescuers struggled to search for people apparently buried under tons of mud, officials said Saturday. (AP Photo/Tatan Syuflana)

JAKARTA, Indonesia, Jan 5: Soldiers and health workers sprayed Indonesia’s capital with disinfectant on Sunday to fend off possible diseases spread by massive flooding that has killed 60 people and affected hundreds of thousands.

Monsoon rains and rising rivers submerged a dozen districts in the greater Jakarta area starting Wednesday after extreme torrential rains hit on New Year’s Eve, causing landslides in hilly areas on the outskirts of the capital that buried scores of people.

More than a thousand soldiers and health workers sprayed disinfectant in hard-hit areas on Sunday to anticipate possible diseases spread by flooding, such as dengue and leptospirosis, a potentially fatal disease spread by rat’s urine, said Ridwan Carman, who is in charge of emergency response and recovery for the Indonesian Red Cross.

About 11,000 health workers were deployed to provide medical care for people affected by the flooding, Health Minister Terawan Agus Putranto said in a statement. He said there had been no recorded cases of leptospirosis, tetanus or serious waterborne diseases.

In Lebak, a district in neighboring Banten province, where flash floods and mudslides swept away more than 1,700 houses and destroyed several villages, rescuers were still searching for a 7-year-old boy reportedly dragged away by flash flooding that killed at least nine people, said Zainal Arifin, a local search and rescue agency chief.

He said mudslides that covered much of the area, blackouts and lack of telecommunications were hampering the search efforts.

Indonesian President Joko Widodo on Sunday failed to meet survivors in the devastated village of Sukajaya, where the highest number of deaths were reported, as his helicopter was unable to land due to bad weather, the presidential secretariat said in a statement. The village is in the hardest-hit district of Bogor, where 16 people were killed by flash floods and landslides.

Waters have receded in most parts of greater Jakarta, allowing many residents to return and clean up, but scores of tightly packed settlements close to rivers that often suffer from floods during the rainy season remained inundated or covered in mud and debris.

Tens of thousands of people remained crammed in damp shelters, mostly in western Jakarta and its satellite city of Bekasi.

Government data on Sunday showed that some 92,200 people were still unable to return home as the filthy waters submerged their houses up to 1.5 meters (5 feet) high.

In a cramped and damp emergency shelter at a sports center in south Jakarta, mothers breast fed their babies near piles of smelly wet garbage.

“My baby is not sleeping as the rain comes in, the wind comes in,” Yuyun Yuniarti said while holding her 7-month-old baby in a sling. “It is disgusting here, but we are stuck.”

Yuniarti said food and medicine appeared to be sufficient, with most shelters visited in recent days by authorities and private organizations delivering regular supplies of food.

A temporary clinic was treating patients close to where Yuniarti was sleeping, including many suffering from respiratory illnesses.

Save the Children, an international child rights organization, expressed its concern about the dire situation for children. At least six kids have died from the floods and tens of thousands have had to leave their homes in Jakarta.

“We call on all involved to make sure children are kept safe and have a roof over their heads, and food to eat,” Dino Satria, Save the Children’s humanitarian director in Indonesia, said in a statement.

He said his organization would provide school kits, tents and hygiene kits to prevent the outbreak of diseases.

Indonesia’s Meteorology, Climatology and Geophysics Agency said that more downpours were forecast for the capital in the coming days, and that the potential for extreme rainfall would continue until next month across the vast archipelago nation. The government on Friday started cloud seeding in an attempt to divert rain clouds from reaching greater Jakarta to prevent possible flooding, the agency said.

Indonesia is hit by deadly floods each year, and Jakarta, the capital of Southeast Asia’s largest economy, is not immune. But this year’s floods have been particularly bad, with nearly 400,000 people seeking refuge in some 270 shelters across the greater metropolitan area as floodwaters reached up to 6 meters (19 feet) in some places.

At least 23 people killed in an explosion at a fireworks factory near the Indonesian capital, Jakarta, reports say. ... Read More...

What we saw at Teku Hospital (photo feature)
10 hours ago
Oppn parties fail to secure majority seats in parliament to form new govt, Oli likely to be reappointed as new PM
7 hours ago