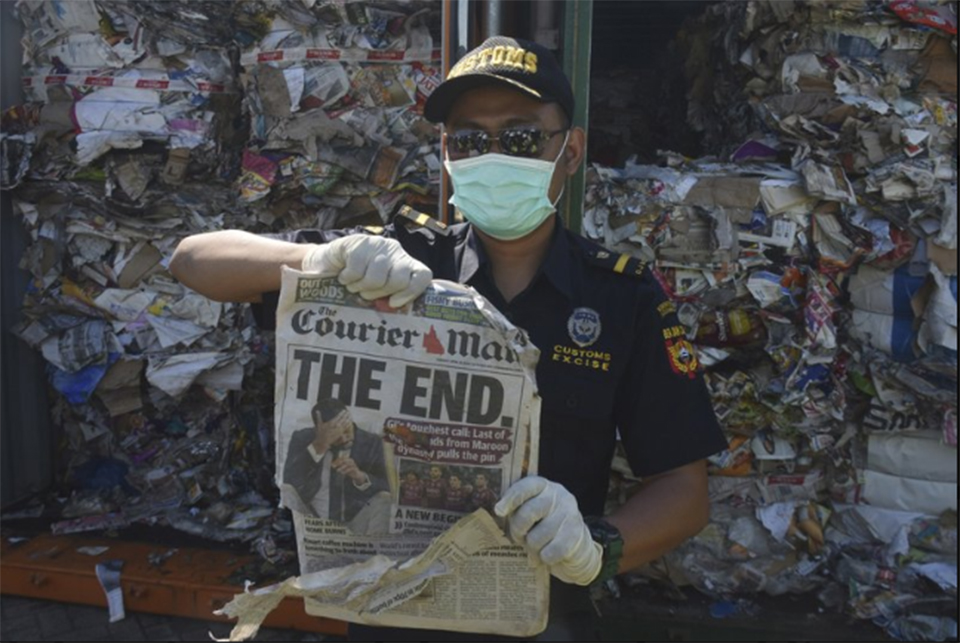 Indonesian custom officers show off the front of a foreign newspaper amoung waste found in a container at the Tanjung Perak port in Surabaya, East Java, Indonesia, Tuesday, July 9, 2019. Indonesia is sending dozens of containers of imported waste back to Western nations after finding it was contaminated with used diapers, plastic and other materials, adding to a growing backlash in Southeast Asia against being a dumping ground for the developed world's rubbish. (AP Photo)

JAKARTA, July 9: Indonesia is sending dozens of containers of waste back to wealthy nations after finding it was contaminated with used diapers, plastic and other materials, adding to a growing backlash in Southeast Asia against being a dumping ground for the developed world’s rubbish.

The Directorate General of Customs said Tuesday that 49 containers at Batam port near Singapore will be returned to Australia, the U.S., France, Germany and Hong Kong after inspections showed their contents violated Indonesian laws on the import of hazardous and toxic waste.

Separately, the head of customs at East Java’s Tanjung Perak port, Basuki Suryanto, said eight other containers with 210 tons of waste that arrived from Australia on June 20 were supposed to contain only paper but included other matter.

“It turned out those containers also had household waste, used cans, plastic bottles, used oil packaging, used electronics, used baby diapers and used footwear. So we decided to return it to the country of origin,” he said.

China banned the import of plastic waste at the end of 2017, resulting in more being sent to developing Southeast Asian nations.

A study published in June last year in the journal Science Advances that used United Nations data found other nations would need to find a home for more than 110 million tons of plastic waste by 2030 because of the Chinese ban. Indonesia and China are themselves among the world’s biggest producers of plastic waste, which is increasingly fouling their own land, seas and beaches.

Suryanto said the Indonesian-owned company that imported the Australian waste to the East Java port is obliged to return it to Australia within 90 days. No other sanctions were planned, he said.

Directorate General of Customs spokesman Deni Surjantiro said the 49 containers to be repatriated from Batam were among 65 containers of waste inspected at the port. Eleven were filled with plastic trash and 38 contaminated by toxic or otherwise hazardous waste, he said.

Importing hazardous waste into Indonesia is a criminal offense, Surjantiro said, with a maximum 12-year prison sentence and a maximum fine of 12 billion rupiah ($850,000).

The Philippines was recently involved in a high-profile spat with Canada over what Philippine officials said was illegally transported garbage and in May sent 69 containers back to Canada. Malaysia in May said it would send back some 3,000 tons of non-recyclable plastic waste to countries such as the U.S., U.K., Canada and Australia

Philippine officials said the Canadian garbage was transported to their country in 103 containers in 2013 and 2014 and falsely declared as recyclable plastic scraps. Some of the garbage was disposed of, leaving 69 containers of electrical and household waste, including used diapers, rotting in two Philippine ports.

An Indonesian man who has emerged as the world’s oldest at an incredible 145 years has revealed he is ready... Read More...