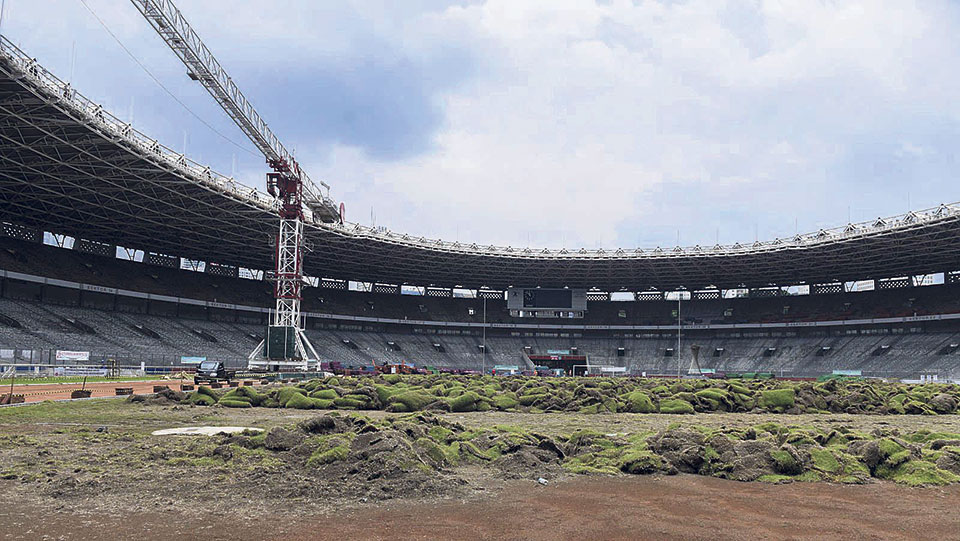 Gelora Bung Karno (GBK) Stadium in Jakarta, Indonesia where the renovation work is being carried out. The stadium will host many events including football during the Asian Games 2018.

JAKARTA, Dec 5: Despite concerns on several things including the completion of infrastructure on time, Indonesia Asian Games 2018 Organizing Committee (INASGOC) seems to be confident toward making the continent’s biggest sporting event a grand success next year.

Two Indonesian cities—Jakarta and Palembang—are hosting the Asian Games next year (August 2 to September 18) that will welcome 9,500 athletes from 45 nations.

However, Erick Thohir, chairman of INASGOC was confident that the venues would be ready six months before the games. He appealed the sporting community of Asia not to doubt his nation’s ability of hosting the event successfully.

“The construction works are still underway, but most of the venues will be ready within this year. We are confident of making everything ready six months prior to the Asian Games,” said Thohir, during a media forum organized by INASGOC in Jakarta last week.

Indonesia was chosen as the host of the Asian Games (also known as the Asiad) in 2014, when the previously determined host Vietnam decided to pull out citing financial problems.

In 2012, Vietnamese capital Hanoi had beaten Indonesia’s Surabaya and UAE’s Dubai to earn the hosting right of the event, which is the second biggest sporting event after Olympics.

Many other nations had registered interest to become Hanoi’s replacement, but the Olympic Council of Asia (OCA) chose Jakarta as the main host and Palembang as the supporting host. Another Indonesian city Surabaya withdrew its interest to focus on other sporting events.

Normally, any host nation gets seven years for preparations of the Asiad but Indonesia got only four years. Although OCA planned to host the games in 2019, Indonesia decided to drag it one year earlier to avoid clash with its national elections.

Despite having less time in hand for preparation in comparison to the hosts of previous editions of the Asiad, Indonesia has turned the impossible into possible, said Thohir, who is also an Indonesian media tycoon and the president of Italian club Inter Milan.

“We want to show the whole world that Indonesia has changed and it posses the ability of hosting any big event successfully. During the games, you will witness our hard work,” added Thohir.
The Asiad will feature a total of 462 events of 40 sports, 12 more than the Rio Olympics, in four different sports clusters (three in Jakarta and one in Palembang).

This is the first occasion that the Asiad is going to be hosted in two different cities. Since Jakarta and Palembang were two cities to host the Southeast Asian Games (SEA) in 2011, the infrastructure developed for the sub-continental event are being renovated and upgraded for the continental event, with an investment of US$ 2.2 Billion.

Events like women’s football, beach volleyball, bowling, triathlon, and shooting will be held in Palembang. Likewise, Jakarta suburb (one of the three clusters in Jakarta) will host sports including men’s football, cycling, and paragliding, among others.

The most important venue of the Asiad will be Gelora Bung Karno (GBK) Stadium – which will host men’s football and other sports including basketball, tennis, volleyball, and archery.  The 55-year-old stadium’s capacity is being reduced from 100,000 spectators to 70,000. The stadium will be ready soon, according to local officials.

Alex Noerdin, governor of South Sumatra province where Palembang lies, said that his federal government was constructing 24-kilometer-long new rail-link keeping the Asiad in mind. “This is going to be the first rail-link in the whole state, and we are investing in it to make our transportation free of problem during the Asiad,” said Governor Noerdin during a dinner he hosted for international journalists who were in Palembang for a tour of the Jakabaring Sport Complex.

Thohir said that the Asiad was a great chance for his nation to build sports infrastructure that will benefit the upcoming generations as well. “We are not constructing for the Asiad only, we are creating something for our future generations as well. So we are not in a hurry, we will build efficiently and finish them on time,” he said.

KATHMANDU, May 13: President Bidya Devi Bhandari has called for making the local level election scheduled for Sunday, May 14,... Read More...