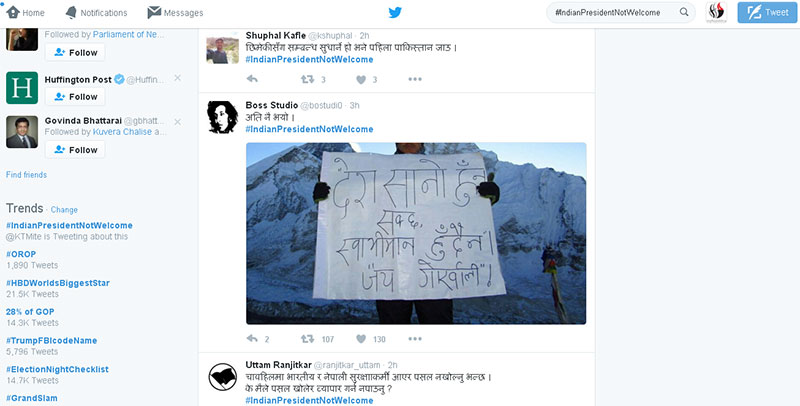 KATHMANDU, Nov 2: At a time when the Indian President Pranab Mukherjee arriving on a three-day state visit to Nepal #IndianPresidentNotWelcome has hit the trending, in protest of Mukherjee’s Nepal visit on Wednesday.

There has been a flurry of tweets against the Mukherjee’s Nepal visit on social media, such as Facebook and Twitter with the hashtag #IndianPresidentNotWelcome.

Lashing out at the Mukherjee’s visit, Shuphal Kafle writes, “Go to Pakistan if you want to improve ties with the neighboring countries.

Similarly, Sagar writes when a single person’s visit affects millions, we should not welcome him.

When a single person's visit affect millions of life, must say #IndianPresidentNotWelcome

Ramen Adhikari writes, "So sorry to say but it is fact that the millions of Nepalis were affected by the Indian blockade last year."

#IndianPresidentNotWelcome so sorry to say but it is a fact from millions of Nepali who were affected by the #IndianBlockade last year.

Indian Presient Mukherjee  is  arriving on a three-day state visit to Nepal. He is arriving at 12:30 pm.