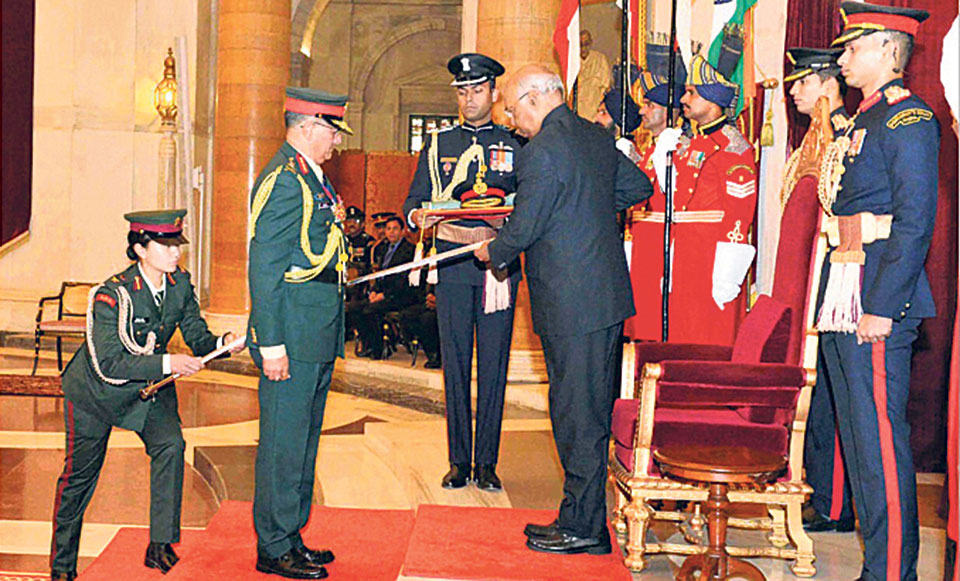 Chief of Army Staff of Nepal Army General Purna Chandra Thapa being conferred with the title of honorary general of the Indian Army by the president of India, Ram Nath Kovind, amid a function in New Delhi on Saturday. Photo: Nepal Army Website

The Indian president conferred the insignia on CoAS Thapa amid a ceremony held at the President’s Office, New Delhi.

Following the ceremony, the official Twitter handle of the Indian president tweeted: “President Kovind confers the Honorary Rank of General of the Indian Army on General Purna Chandra Thapa, Chief of Army Staff, Nepalese Army, for his military prowess and contribution to fostering Nepal’s long and friendly association with India.”

It has been a tradition between Nepal and India to award honorary titles to each other’s army chiefs since 1950.

Chief of Army Staff Thapa left for India on a six-day visit to India on Friday at the invitation of his Indian counterpart Bipin Rawat. Thapa is scheduled to visit Indian Army’s South-western Command in Jaipur and the Central Command in Lucknow.

According to the army headquarters, CoAS Thapa will hold separate meetings with Indian Defense Minister Nirmala Sitaraman and National Security Advisor Ajit Doval during his stay in the Indian capital. Thapa’s entourage to India consists of seven people including his wife Deepa Thapa and the director of Nepal Army’s intelligence department, Major General Jhankar Bahadur Kadayat.

Govt does not have authority to illegally ban citizens from traveling abroad: SC

KATHMANDU, July 13: The Supreme Court (SC) has said that the government does not have the authority to issue travel... Read More...

PM Oli's remarks on Ayodhya not linked to any political subject and have no intention at all to hurt anyone’s sentiments: Foreign Ministry
33 minutes ago