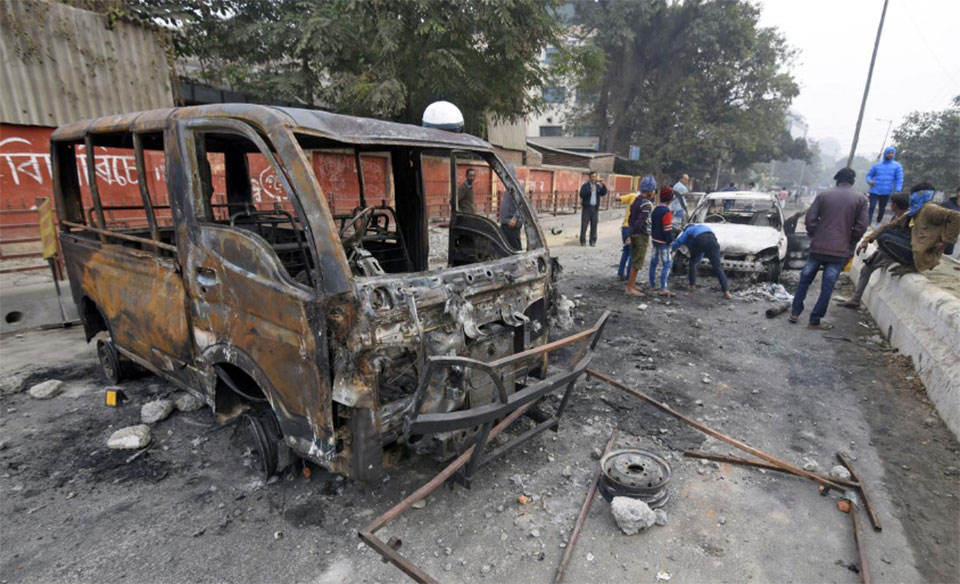 People stand next to vehicles that were set ablaze by demonstrators during a protest on Thursday, after India's parliament passed a Citizenship Amendment Bill (CAB), in Guwahati, India, December 13, 2019. REUTERS/Anuwar Hazarika

NEW DELHI, Dec13: A divisive citizenship bill has been signed into law in India, a move that comes amid widespread protests in the country’s northeast that could force the cancellation of a visit by Japan’s Prime Minister Shinzo Abe.

Two people were killed and 11 injured on Thursday when police opened fire on mobs in Assam state torching buildings and attacking railway stations. Protesters say the law would convert thousands of illegal immigrants into legal residents.

The new law lays out a path of Indian citizenship for six minority religious groups from the neighboring countries of Bangladesh, Pakistan and Afghanistan.

Indian President Ram Nath Kovind gave his assent to the bill late on Thursday, signing it into law, an official statement said.

Prime Minister Narendra Modi has planned to host Abe at a meeting in Assam next week as part of a campaign to move high-profile diplomatic events outside Delhi to showcase India’s diversity.

Japan’s Jiji Press reported on Friday that Abe is considering cancelling his trip. India’s foreign ministry said it was not in a position to comment on the visit which was originally planned for Dec 15-17.

A movement against immigrants from neighboring Bangladesh has raged in Assam for decades. Protesters say granting Indian nationality to more people will further strain the resources of the tea growing state and lead to the marginalization of indigenous communities.

Japan has stepped up infrastructure development work in Assam in recent years which the two sides were expected to highlight during the summit. Abe had also planned to visit a memorial in the nearby state of Manipur where Japanese soldiers were killed during World War Two.

Critics of Modi’s Hindu nationalist government say the bigger problem with the new law is that it is the first time India is using religion as a criterion for granting citizenship and that it excludes Muslims from its ambit.

The law seeks to grant Indian nationality to Buddhists, Christians, Hindus, Jains, Parsis and Sikhs who fled the three Muslim-majority neighboring countries before 2015.

The Indian Union Muslim League party has petitioned the Supreme Court saying the law was in conflict with the secular principles of India’s constitution that guaranteed equality to all without any regard to religion. No date has yet been set for the hearings.

The party said the law is “prima facie communal” and questioned the exclusion of minorities such as Rohingya Muslims who were just as persecuted as other faiths listed in the law.