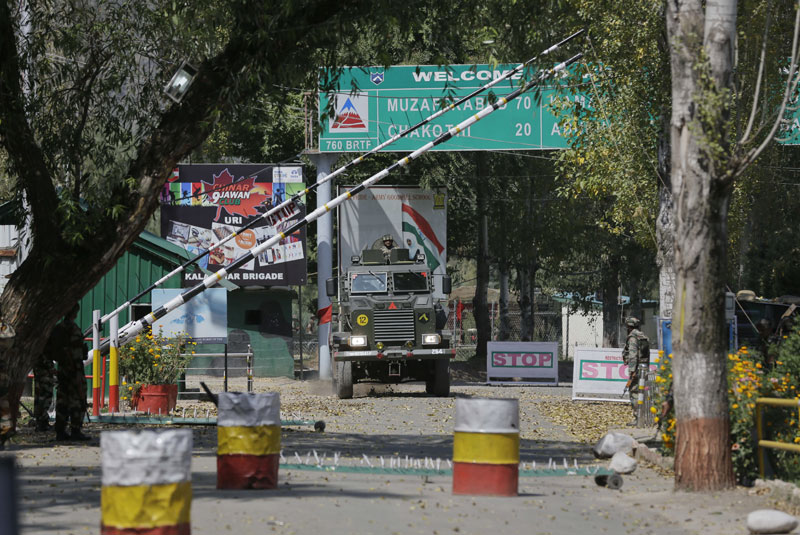 SRINAGAR, India, Oct 3: A gun battle with a group of militants who attacked an Indian army camp in the Indian portion of Kashmir that killed one Indian paramilitary soldier and wounded another has ended early Monday morning, police said.

A senior police official speaking on customary condition of anonymity said search operations were on at the base which was attacked late Sunday by an unspecified number of militants firing grenades and guns.

Police officer Syed Javeid Mujataba Gillani said earlier that it was not immediately known whether the militants tried to enter the camp in the garrison town of Baramulla, 50 kilometers (30 miles) northwest of Srinagar, the main city in Kashmir. The camp is the local headquarters of a counterinsurgency military unit.

The paramilitary soldiers hit by gunfire were also stationed at the camp, a police officer said on condition of anonymity as he was not authorized to talk to reporters.

Sunday's attack came three days after the Indian army said it had carried out a "surgical strike" in the region and destroyed "terrorist launching pads" used by the militants with support from Pakistan.

The Indian assault followed a deadly rebel attack on another Indian base in Kashmir. On Sept. 18, suspected rebels using guns and grenades sneaked into an army base in Uri, a town in Indian-controlled Kashmir, and killed at least 18 soldiers.

India accuses Pakistan of arming and training insurgents fighting for Kashmir's independence from India or its merger with Pakistan, a charge Pakistan denies.

Kashmir is divided between India and Pakistan. The longtime rivals have fought two wars for control of the Himalayan territory since British colonialists left in 1947. Both claim it in its entirety.