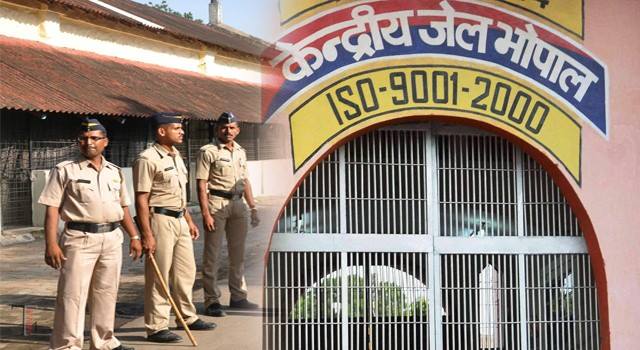 BHOPAL, Oct 31:  Indian police gunned down eight Islamists on Monday after they escaped from a high-security jail by slitting the throat of a prison guard and scaling the walls with knotted bedsheets.

The members of the banned Students Islamic Movement of India(SIMI) had staged the breakout from the prison in Bhopal by attacking and murdering the warder with sharpened prison-issue steel kitchen plates in the middle of celebrations to mark the Hindu festival of Diwali.

Police said they were later cornered on the outskirts of the city in the central state of Madhya Pradesh but resisted efforts to take them back into custody and were subsequently shot dead.

"We asked them to surrender but they tried to break the police cordon," Yogesh Choudhary, Bhopal's inspector general of police, told AFP.

"They were unarmed but attempted to attack the police with stones. We had to shoot them."

Choudhary, however, later told reporters that "they had weapons and cross-firing took place". TV images showed crude pistols lying next to the bodies, triggering scepticism in some quarters about the police version of events.

"Security forces have the right to use proportionate force to save lives, but it appears in this case that the suspects may not have been armed," Meenakshi Ganguly, South Asia director for Human Rights Watch, told AFP.

"The entire incident should be properly investigated. A take-no-prisoners approach to policing is dangerous and harms efforts to create a rights-respecting police force."

After using their sheets to climb and descend several walls inside the prison, the inmates made their way on foot to a village 15 kilometres (10 miles) south of the city centre, despite a massive search.

Police said local residents had alerted them about suspicious movements in the village, leading to the raid in the late morning.

The home ministry had earlier issued a nationwide red alert over the jailbreak, while police had released mugshots of the prisoners.

Police insist there was no breakdown in security at the prison, a supposedly maximum security facility which has a round-the-clock electronic surveillance system.

However four officials, including the prison's superintendent, have been suspended and an inquiry launched into the escape.

He said the National Investigation Agency had been asked to open an inquiry into the breakout and anyone found to have acted incompetently would be prosecuted.

Most of the inmates had been awaiting trial for "terror-related activities, sedition and robbery" for more than three years, although two of them had only been detained since February.

The breakout happened on the night of Diwali, a major Hindu festival when revellers traditionally set off fireworks which can shroud the night skies.

Seven SIMI members escaped from a jail in the town of Khandwa in 2013 and were arrested last year after being on the run for over two years, later prompting the government to house all the arrested SIMI members in the high-security facility in Bhopal.

Indian authorities have accused SIMI of carrying out several deadly bombings and of having links with Pakistan-based militant groups.

Police blamed the group for the serial bombing of Mumbai commuter trains in 2006 which killed 187 people, as well as bomb blasts in New Delhi.

The government banned the group in 2001 in the aftermath of the September 11 attacks in New York and Washington.

Hundreds of its members have been arrested in the past decade, but the group says it merely propagates an "Islamic way of life" for Indian Muslims.

ARGHAKHANCHI, Aug 31: A police team has been mobilized to find a leopard that has created a terror in a... Read More...