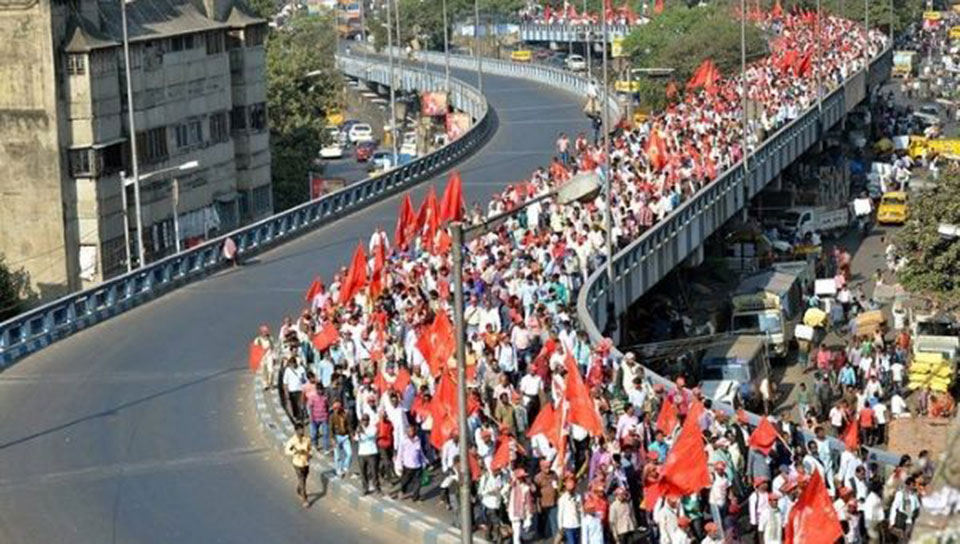 NEW DELHI, Nov 30: Over a 100,000 farmers across India are marching towards the capital city of Delhi Thursday and Friday to demand debt waivers and a solution to the agrarian crisis. They are organized by the Communist Party of India (Marxist) with the support of All India Kisan Sangharsh Coordination Committee (AIKSCC, All India Farmers’ Resistance Coordination Committee), which is comprised of around 200 organizations.

They demand a 21-day special parliamentary session to debate the agrarian situation in the country. The protesters are also demanding the approval of two bills that would allow a debt waiver for indebted farmers and higher prices for their agricultural produce.

The Kisan Mukti March (Farmers Liberation March) wants the government to take into account the agrarian crisis that has led to the suicide of over 300,000 Indian farmers in the past 10 years.

The march will be joined by other progressive groups of civil society and progressive politicians.

Jignesh Mevani, a Dalit politician, activist, and a Member of the Legislative Assembly of the western state of Gujarat, wrote on Twitter: “Let’s go to Delhi today and tomorrow. Massive protest against complete indifference and callous attitude of BJP government towards farmers’ plight. A special session of parliament is a must now. Let there be a debate in the parliament why our farmers have to commit suicide.”

On Thursday, farmers gathered at the Ramlila Ground in Delhi. They will march towards parliament Friday.

"On November 30, the farmers will start their march from Ramlila Ground to Parliament. At Parliament Street, farmer leaders will speak on agrarian issues and also leaders of different political parties, barring the (ruling) BJP, will address the gathering," said Communist Party of India (Marxist) leader Hannan Mollah, who is also an AIKSCC official.

Other demands include the formation of a national and state disaster relief commission that will specifically work on farmers’ distress and the right to access institutional credit at a subsidized interest rate.

More than 300 volunteers, mainly students of four universities in Delhi have been working for the past month to make all arrangements. Volunteers are present to assist the protesting farmers.

The Delhi government provided more than 299 mobile toilets en route and at the Ramlila Ground along with water stations and ambulances on standby.

A similar march was organized by the Communist Party of India (Marxist) in the state of West Bengal Wednesday where around 50,000 farmers marched to the city of Kolkata and presented their demands to the West Bengal governor. The protesters rejected both the state government of Trinamool Congress Party and the central government of BJP for their anti-worker, anti-farmers stance.

TIKAPUR, Oct 28: Farmers of Kailali are worried as their banana is not finding market because of cheaper Indian imports which... Read More...