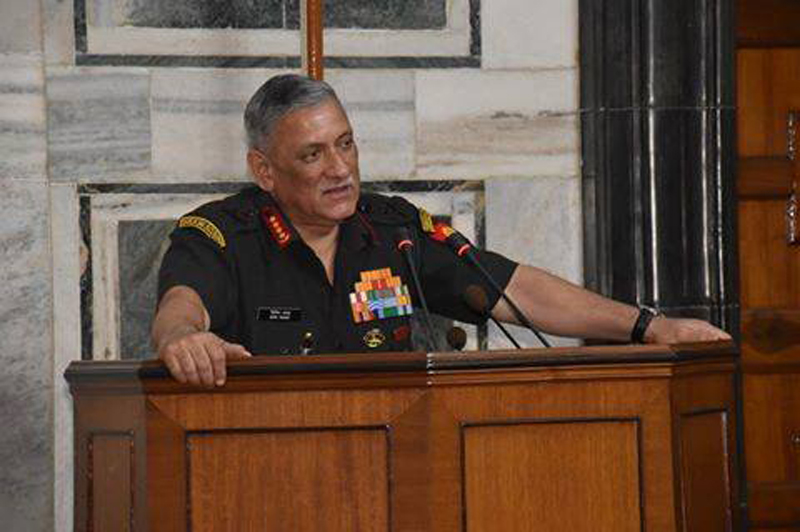 Upon the invitation of Chief of Army Staff, Rajendra Chhetri, Indian Army Chief is in official visit to Nepal.

President Bidhya Devi Bhandari will confer the decoration of honorary General of Nepal Army to Indian Army Chief GeneralBipin Rawat amid a special program at Sheetal Niwas on Wednesday.

It has been a long-standing tradition to confer the NA decoration to the Indian Army Chiefs as continuity to the cordial relations between the two armies, and cultural, religious and historic ties between Nepal and India.

According to spokesperson of the Nepal Army (NA), Jhankar Bahadur Kadayat, the NA will organize a special program in the honor of visiting Indian COAS Rawat.

During his visit, General Rawat will visit Indian Army Pension Camp in Pokhara and will address ex- Gurkhas. Similarly, he will go to Manag and visit Muktinath temple.

The third rank in protocol in the administration of Indian Government, General Rawat was appointed as the 27th Chief of Indian Army Staff on 17th December, 2016 amid protest from the opposition.

KATHMANDU, Nov 11: Chief of Indian Army General Dalbir Singh has arrived in Nepal on a three-day visit to inspect the... Read More...

Maha Astami, eighth day of Bada Dashain, being observed across the country today
16 hours ago

President Bhandari not to offer tika to general public this Dashain
19 hours ago
UN Day Special Feature: The proud story of Nepal Army in UN Peacekeeping Missions
12 hours ago