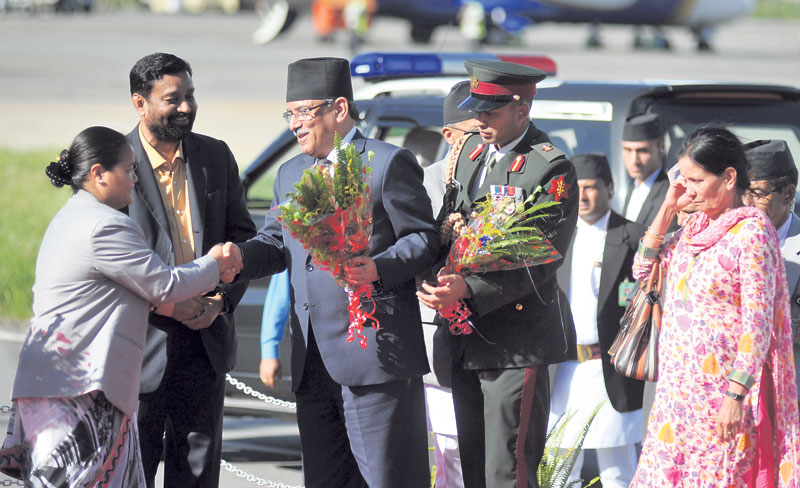 KATHMANDU, Sept 18: Prime Minister Pushpa Kamal Dahal has said that India appreciates Nepal’s efforts to bring the dissidents on board the process of full-fledged implementation of the new Constitution, and that this would help improve Nepal-India relations, which had soured in the recent past.

“Everybody knows that we are in the phase of implementation of the new Constitution. We will forge a broad consensus and bring all the dissidents on board as far as possible. India has welcomed and supported our efforts to implement the Constitution through broad consensus,” Prime Minister Dahal said at a press conference after his arrival at Tribhuvan International Airport Sunday, at the end of  his four-day state visit to India.

He said that India’s welcoming of the ongoing efforts of the current government to bring all sections of society on board for the implementation of the Constitution was indicative of improvement in Nepal-India relations.

A 25-point joint statement issued by Prime Minister Dahal and his Indian counterpart Narendra Modi in Delhi Friday evening following their one-to-one and bilateral meetings, stated that “Prime Minister of India welcomed the ongoing efforts of the Government of Nepal to take all sections of the society on board for effective implementation of the Constitution.”

He said that his visit was successful in building an environment of mutual trust between Nepal and India. “I believe that my state visit has helped to increase mutual trust between the two countries,” he said, adding, “Likewise, I believe that my visit has also helped create an environment for successful implementation of the past agreements on economic, social and other various infrastructural development projects as well as the ongoing development projects.”

He said that he and his Indian counterpart have agreed on time-bound completion of all the development projects being carried out in Nepal with Indian support.

Dahal had reached New Delhi on Thursday on a four-day visit to the southern neighbor. During his visit, he had a one-on-one meeting with Indian Prime Minister Modi as well as bilateral meetings led by the two heads of government.

“During the meetings, we agreed to carry out regular review of progress in various mega projects being supported by India such as  trans-border railway service, integrated checkposts and the Postal (Hulaki) Highway with a view to taking necessary measures to complete them on time,” Prime Minister Dahal said.

He said that the governments of the two countries have agreed to hold a joint-meeting led by their foreign ministers within 2016 to review Nepal-India relations and take decisions for further improving the bilateral relations.

“Likewise, India has agreed to provide a soft loan for construction of the second phase of the Postal Highway and the trans-border transmission lines connecting with Butwal, for setting up hydropower substations in Hetauda and Dhalkebar, and for building a polytechnic center in Kaski,” said Dahal.

He also said the two governments have agreed on the immediate implementation of the Power Trade Agreement signed two years ago. “We expect immediate progress in the matter,” he added.

He said that the two sides have also agreed on the need for early finalization of the Detailed Project Report (DPR) of the Pancheshwar Multipurpose Project, and for cooperation between the security agencies of the two countries for border security.

During his visit, Prime Minister Dahal, who was accompanied by Minister for Foreign Affairs Prakash Sharan Mahat and Minister for Physical Infrastructure and Transportation Ramesh Lekhak, had met President of India Pranab Mukharjee.

KATHMANDU, Sept 17: India has reiterated its stance that Nepal should address the demands of various dissident groups in the new... Read More...