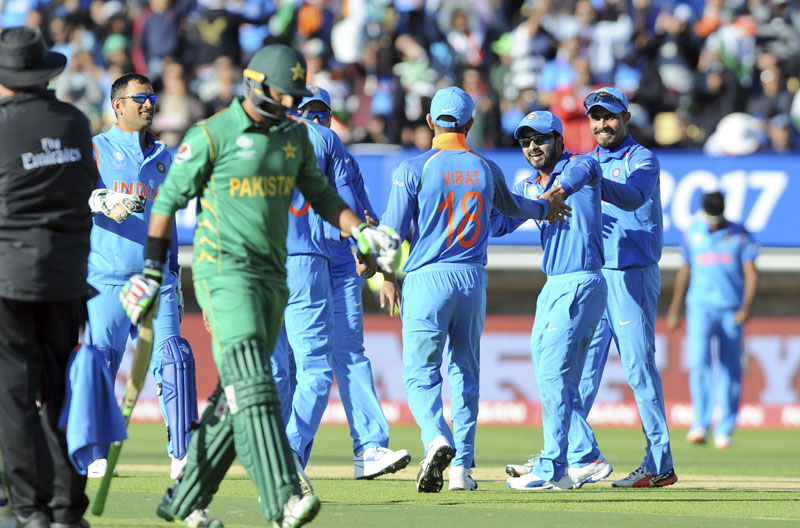 BIRMINGHAM, June 5:  India thrashed rival Pakistan by 124 runs under the Duckworth-Lewis method on Sunday to go top of Group B in the Champions Trophy.

Allrounder Hardik Pandya smashed three sixes at the start of his team's last over as India let rip to reach 319-3 from 48 overs after being put into bat at a rain-hit Edgbaston, which had almost 25,000 spectators.

In reply, Pakistan finished on 164 all out in 33.4 overs — opener Azhar Ali's 50 off 65 balls and Mohammad Hafeez's 33 off 43 providing the only resistance — and rarely looked in the game.

Pakistan's target at the start of its innings was 324 runs in 48 overs under the Duckworth-Lewis method, but this became 289 in 41 after play was again interrupted by rain.

Aware of tougher opposition ahead, such as top-ranked South Africa in the same group, India captain Virat Kohli praised his batsmen but wasn't totally happy.

"I would say 9 out of 10. In the field we were still a 6 today," Kohli said. "We need to tighten our fielding to compete hard against the best teams."

It was surprisingly easy for India. Opener Rohit Sharma top-scored with 91 off 119 — his 30th ODI half-century — before being run out and Kohli was 81 not out off 68, with six fours and three sixes. Shikhar Dhawan was first out, for 68 off 65 in his 18th ODI 50, after confidently advancing and then carelessly hitting a full toss off Shadab Khan to Azhar Ali at deep midwicket.

An impatient Yuvraj Singh struck eight fours and one six in a 32-ball 53 to hurry the innings along when needed, and was named player of the match for doing so.

Yuvraj was out leg before wicket to a yorker from Hasan Ali in the rain-hit game that was at first reduced by two overs, and the possibility of more showers.

Sharma was run out on a contentious call by the TV umpire, with the opener's bat over the line but not obviously grounded. Kohli had wanted the single but misjudged the speed of Babar Azam's reactions. The dismissal triggered jeers from Indian fans.

In bat, Pakistan was unable to cope with Ravindra Jadeja's bowling (2-43, claiming Azhar Ali and Hafeez) and his brilliant fielding, including the important wicket of Shoaib Malik, run out for 15. Jadeja gathered the ball at point and threw in one movement, directly hitting the stumps with the batsman far away. Umesh Yadav took 3-30, including the last two wickets with Wahab Riaz absent hurt.

Defending champion India effectively put the game out of reach for a poor Pakistan batting lineup by hitting 72 runs in the last four overs, with Pandya ending on 20 off six deliveries after being promoted up the order. Most of that 20 came during a costly 23-run last over for Imad Wasim (0-66).

"Everything was under control after 40 overs but we lost the plot in the last eight," Pakistan captain Sarfraz Ahmed said.

Play was interrupted after 9.5 overs with India on 46-0. The teams were off again with India on 173-1 off 33.1 overs as Pakistan started to clamp down.

India had seemed to slumber in the middle of its innings after reaching 136-0 but a key 93-run partnership in less than 10 overs came from Kohli and Yuvraj for the third wicket.

Three-time semifinalist Pakistan chose to bowl but its fielding often let the team down, including Kohli being dropped by substitute Fakhar Zaman on 43 off Riaz, who went for around 10 an over to end on 0-87.

Mohammad Amir (0-32) was the most economical bowler for Pakistan, conceding an average of four runs an over.

A minute's silence was held before the match for the victims of the London Bridge attacks on Saturday night, amid heavy security at the West Midlands ground.

"Our thoughts are with everyone affected by what has happened in London overnight," the International Cricket Council said in a statement released Sunday.

Australia plays Bangladesh in Group A at The Oval on Monday.