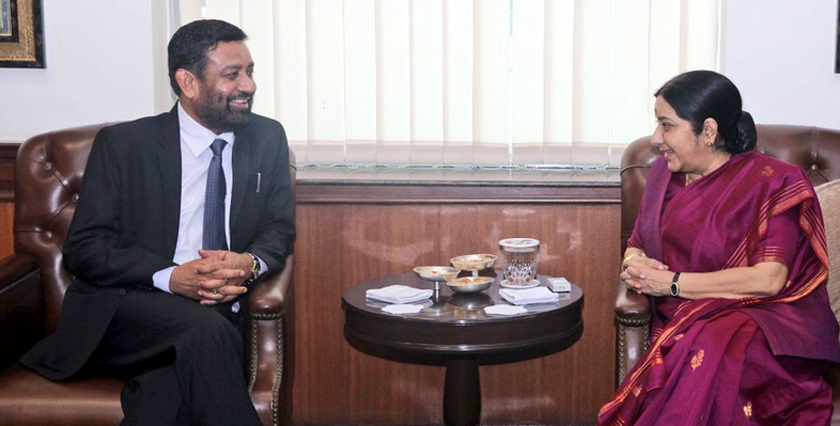 KATHMANDU, Aug 20: Indian leaders have expressed satisfaction over the efforts being made to address the concerns of Madhesi people in the new Constitution and the progress made in implementing the Constitution.

During meetings with Deputy Prime Minister Bimalendra Nidhi on Friday, Indian Home Minister Rajnath Singh and Minister for External Affairs Sushma Swaraj said India wants political stability in Nepal through the implementation of the new Constitution. Nidhi is currently on a visit to the Indian capital.

According to a high level Nepali source, Indian Minister Singh said India is happy to know that efforts are being made to settle disputes related to the Constitution through dialogue and consensus.

"We want political stability in Nepal since that is essential for the implementation of the Constitution. We are happy at the effort to seek solutions through dialogue and consensus as we want development and prosperity in Nepal," the source quoted the Indian minister as saying.

Likewise, External Affairs Minister Swaraj said that India will support and cooperate with the efforts being made to address the agenda of the Madhesi people through constitutional amendment.

"As Nepali leaders are initiating [measures] for addressing the concerns of Madhesi people through constitutional amendment, we are not only happy but also hope that this will establish political stability in Nepal," the source quoted Swaraj as saying.

India had imposed an undeclared economic blockade on Nepal during the five-month long Madhes movement after the promulgation of the Constitution. Agitating Madhes-based parties held sit-in protests at crucial border check-points while India stopped the flow of vehicles carrying essential goods into Nepal.

Singh concerned over security, road building
India has expressed serious concern over border security, drawing Nepal's attention to illegal activities and instability in the bordering areas between Nepal and India.

During the meeting between Singh and Nidhi, the Indian minister urged Nepal to increase security watchfulness in the bordering areas. Nepal and India share a 17,51-km open border.

Hinting at the Madhes-movement that created months-long instability in the bordering areas, Singh said that  criminals could benefit from such prolonged instability. As per the source, Singh also urged his Nepali counterpart to speed up action to establish joint border check-posts.

Singh expressed concern over border security and road construction in the bordering area.

Nepal's Home Minister Nidhi gave an invitation to his Indian counterpart to visit Kathmandu and Janakpur in the near future.

Mukherjee to visit Nepal after Dahal visits India
It is confirmed that Indian President Pranab Mukherjee will visit Nepal in the near future.

Deputy Prime Minister Bimalendra Nidhi, who is visiting India as a special envoy of Prime Minister Pushpa Kamal Dahal, on Friday handed over an invitation from President Bidya Devi Bhandari to Mukherjee to visit Nepal.

During the meeting between Nidhi and Indian Minister for External Affairs Sushma Swaraj, the two leaders agreed to the exchange of three high-level visits between India and Nepal in the near future.

According to a high-level Nepali source, the two ministers reached an understanding to begin high-level exchanges with Prime Minister Dahal's visit to India. As per the source, Dahal could visit India in September before he attends the United Nations General Assembly.

Likewise, Indian President Pranab Mukherji will visit Nepal after that and President Bhandari will also visit  India, giving continuity to the high-level exchanges.

DADELDHURA, Dec 11: CPN-UML Vice-Chairman Bhim Rawal has remarked that the proposals in the constitution amendment bill are anti-national. ... Read More...

KATHMANDU, Dec 5: Opposition lawmakers have claimed that the government registered the constitution amendment bill in Parliament at the behest of... Read More...