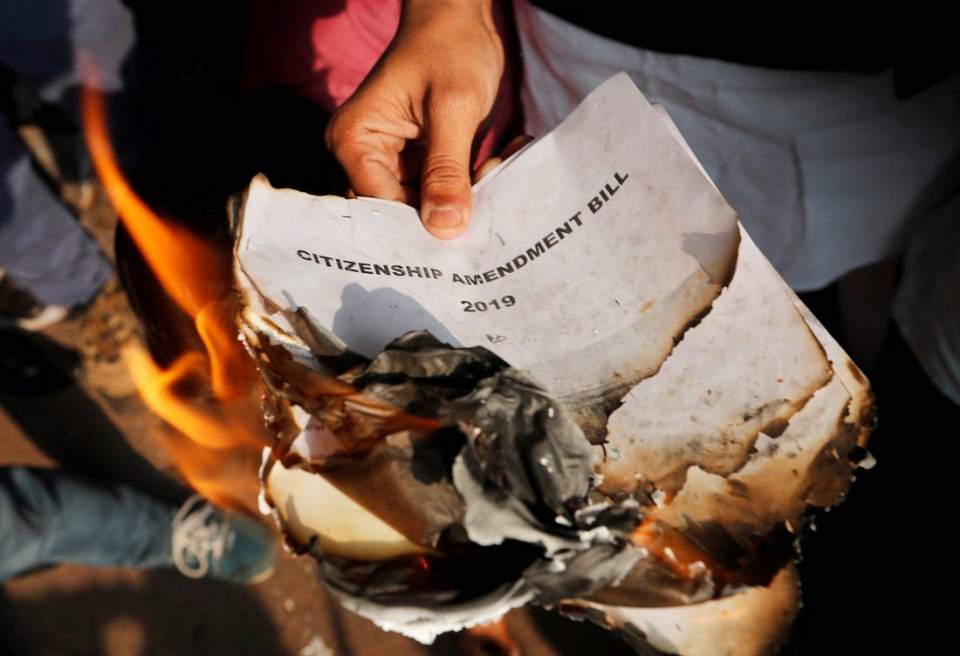 Demonstrators burn copies of Citizenship Amendment Bill, a bill that seeks to give citizenship to religious minorities persecuted in neighbouring Muslim countries, during a protest in New Delhi, India, December 11, 2019. REUTERS/Adnan Abidi

Home Minister Amit Shah tabled the Citizenship Amendment Bill in the upper house of India’s parliament, a day after the lower house gave its approval.

Opposition parties, minority groups, academics and a U.S. federal panel have contested the bill, which for the first time provides a legal route to Indian citizenship based on religion, calling it discriminatory against Muslims.

The proposed law seeks to give citizenship to Buddhists, Christians, Hindus, Jains, Parsis and Sikhs, who fled Afghanistan, Bangladesh and Pakistan before 2015.

The U.S. Commission on International Religious Freedom said on Monday that Washington should consider sanctions against Shah, a close associate of Prime Minister Narendra Modi, if India adopts the legislation.

Introducing the bill in the upper house, Shah defended his government’s move, saying the new law only sought to help minorities persecuted in Muslim-majority countries contiguous with India.

“For India’s Muslims, there is nothing to worry about, nothing to debate. They are citizens, and will remain citizens,” Shah said.

Unlike the lower house, where Modi’s Bharatiya Janata Party (BJP) has a clear majority, the ruling party will likely find it more challenging to push the bill through the upper house, as it is unclear whether it can garner enough support from regional parties.

A vote is expected late on Wednesday.

Protests against the measure have flared in various parts of India, including the ethnically diverse northeastern states, where people fear that settlers from neighbouring Bangladesh could be granted citizenship.

In Assam state, thousands of people protested overnight across several towns and cities, some joining processions carrying flaming torches. Police said they used teargas to beat back protesters in at least two cities

In northern India, thousands of students at Aligarh Muslim University began a hunger strike in protest.

Some opposition Muslim politicians have argued that the bill is targeted against the community, criticising the Modi government for trying to render them “stateless.”