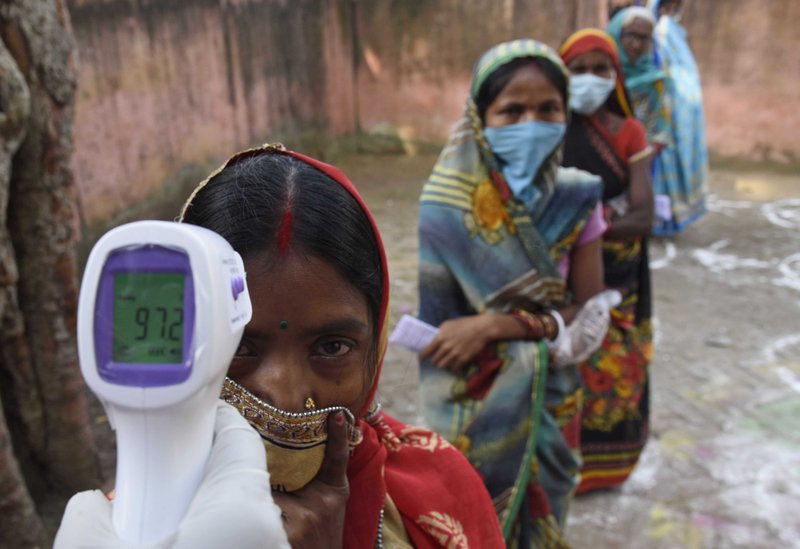 An election officer checks the temperature of a voter before allowing voters to pass at a polling station, during the first phase of state elections at Paliganj, in the eastern Indian state of Bihar, Wednesday, Oct. 28, 2020. With an overall declining coronavirus positive trend, Indian authorities decided to hold the first state legislature election since the outbreak of COVID-19. People began voting Wednesday in the country’s third largest state Bihar with of a population of about 122 million people. (AP Photo/Aftab Alam Siddiqui)

India’s trajectory is moving toward the worst-hit country, the United States, which has over 8.8 million cases.

Life in India is edging back to pre-virus levels with shops, businesses, subway trains and movie theaters reopening and the country’s third-largest state of Bihar with a population of about 122 million people holding elections.

But health experts warn that mask and distancing fatigue is setting in and can lead to a fresh wave of infections.

India saw a steep rise in cases in July and added more than 2 million in August and another 3 million in September. But it is seeing a slower pace of coronavirus spread since mid-September, when daily infections touched a record of 97,894 and the highest number of deaths at 1,275.

Dr. T. Jacob John, a retired virologist, said that in most parts of India the infection curve was never flattened and the number of people who are now susceptible to the virus had decreased.

He warned that the ongoing festival season was likely to increase the speed of the viral spread, resulting in localized outbreaks where people gathered without masks and didn’t adhere to social distancing.

"No evidence" that recovered COVID-19 patients cannot be reinfected: WHO

GENEVA, April 25: The World Health Organization (WHO) said on Saturday that there was currently “no evidence” that people who have... Read More...