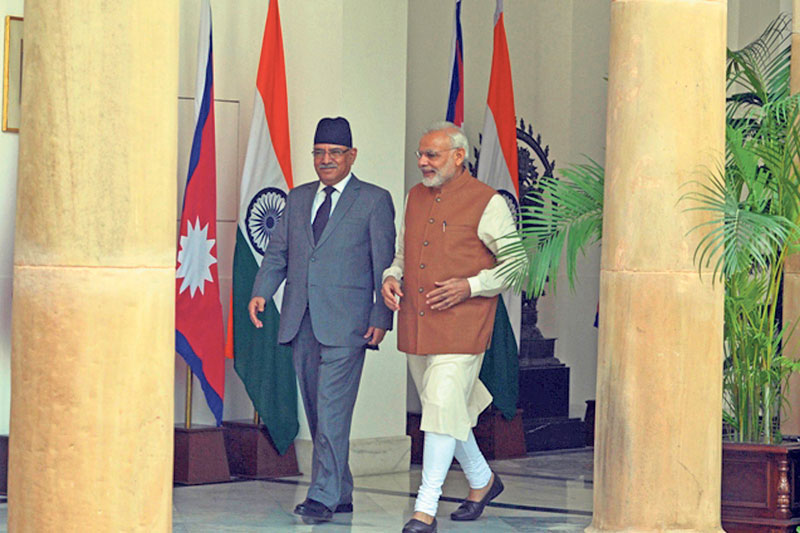 KATHMANDU, Sept 17: India has reiterated its stance that Nepal should address the demands of various dissident groups in the new Constitution through inclusive dialogue and bring them on board in the course of its implemention.

“I am confident that under your wise leadership, Nepal will successfully implement the Constitution through inclusive dialogue accommodating the aspirations of all sections of your diverse society,” Prime Minister of India Narendra Modi said in a joint media briefing after his meeting with Prime Minister Pushpa Kamal Dahal at Hyderabad House in New Delhi on Friday, according to the Ministry of Foreign Affairs .

Dahal reached New Delhi on Thursday on a four-day visit to the southern neighbor, within 45 days of becoming prime minister.

Dahal and Modi addressed the media after a bilateral meeting led by the two heads of government followed by a one-on-one between Modi and Dahal.

Modi said the two prime ministers have agreed to focus on close monitoring and time-bound completion of all development projects being developed with support from India.

“Prime Minister Prachanda [Dahal] and I agreed to push for speedy and successful implementation of the ongoing hydro-projects, and development and 'operationalization' of transmission lines,” said Modi.

Before leaving on the India visit, Dahal had said that the major focus of his visit was to build mutual trust between the two sides and create an environment for expediting the agreements reached with India in the past.

Modi expressed his confidence that their latest decision would provide strength to the two countries' economic engagement and take it to new heights.

Dahal, in his statement, said that his government has made serious efforts to bring everyone on board as Nepal enters the phase of implementation of the Constitution, in the interest of all segments of Nepali society. He described promulgation of the Constitution last year by the popularly-elected Constituent Assembly as a historic achievement for the people of Nepal.

Cooperation in the energy sector received focus during their talks. Dahal said they appreciated that the signing of the Power Trade Agreement (PTA) two years ago was an important achievement in fostering Nepal-India partnership in the energy sector. “We agreed on the need of early operationalization of the free market provision by reviewing the law and regulations,” said Dahal.

According to Prime Minister Dahal, the two sides have also agreed on the need of early finalization of the Detailed Project Report (DPR) of the Pancheshwar Multipurpose Project.

They also discussed about starting work for the development of the second cross-border transmission line connecting with Butwal in Rupandehi district.

They discussed about expediting implementation of various projects identified under different lines of credits (LoC) provided by India. The projects are a motorable bridge at the Mahakali River in the far-western region and development of the Postal [Hulaki] Road phase II and substations for hydropower.

Dahal said he shared with his Indian counterpart Nepal's concern over the growing trade deficit. Nepal has failed to bridge the yawning deficit as it imports 10 times more than it exports to India. “We agreed on the need to take measures to address such imbalance, which cannot be sustainable in the long term,” said Dahal. “Nepal expects support from India's public and private sector in industrialization and growth of trade.”

The two prime ministers have instructed the civil aviation authorities in their respective countries to finalize the matter of providing an additional three air entry routes as requested by Nepal.

Both the prime ministers in their statements emphasized cross-border security.

Modi said the security interests of the two countries are closely aligned and inter-linked. “We must also continue to guard against elements that seek to misuse the [open] border,” said Modi.

Also, Dahal shed light on various aspects of maintaining security along the border and No Man's  Land.

They discussed that control of cross-border crime and maintaining the sanctity of “our border and No Man's Land are mutual security interests of the two countries in which greater cooperation and understanding need to be ensured.”

BIRATNAGAR, August 7: Minister for Supplies Shiva Kumar Mandal has said that it would be a big achievement for the... Read More...