India puts a ban on ginger imports from Nepal 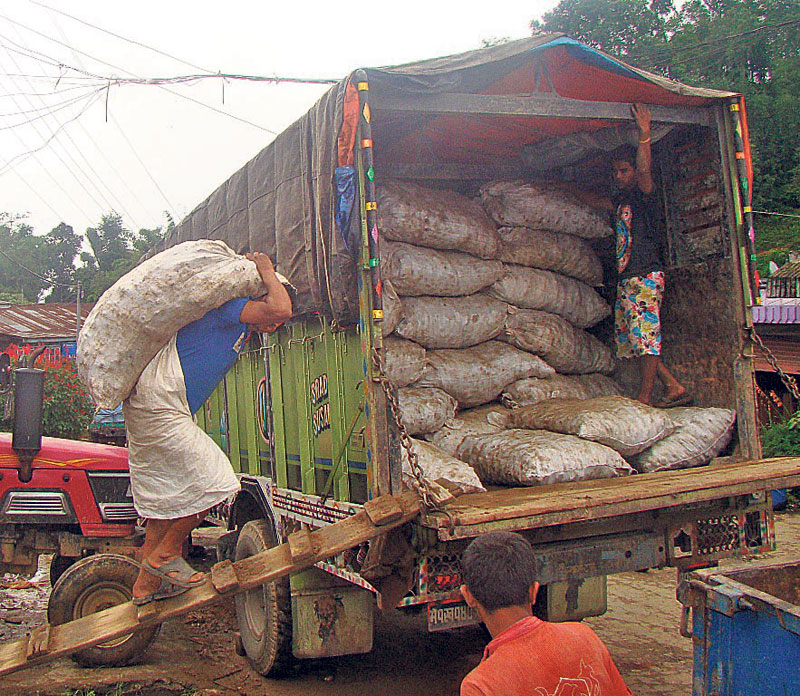 PANITANKI (INDIA), Sept 1: India has put a ban on import of gingers from Nepal, arguing that they have high pesticide residue and that Chinese ginger was being exported in the name of Nepali product.

Not a single consignment of ginger from Nepal has entered India since Tuesday. The decision has come in the middle of the harvesting season. Exporters say local farmers will lose their major international market following restriction on import by the southern neighbor.

India's Food Safety and Standards Authority has dispatched a circular to all its custom points along Nepali border, informing officials there that pesticide-laced Chinese gingers, which are mixed with Nepali gingers, are being exported into the Indian market, according to Panitanki Customs Point.

While the letter undersigned by the authority's director Bimal Kumar Dubey states that pesticide residue has been found in ginger imported from Nepal and China, it did not imply that there should be ban on the import. "It is our duty to stop import of hazardous products," said a custom official. "This will continue until there is another circular." the official added.

Officials of Nepal Ginger Producers and Entrepreneurs Association said that the Indian officials are allowing entry of trucks carrying gingers whose customs formalities were completed by Monday. “They have told us not to export ginger anymore," Indra Budhathoki, general secretary of the association, said. "The Indian side has warned that it will stop trucks loaded with gingers from entering into India from Tuesday," he said.

Budhathoki said that the Indian side has assured them that they would take further decision on the issue only after completing lab test of India-bound gingers.
The nearest food laboratory is in Kolkata of West Bengal state and it takes at least a week to complete lab test of food products.

Earlier, Indian traders had complained that Chinese ginger was mixed in Nepali gingers. They had also complained that there is high pesticide residue in the Nepali products.

Nepali traders also admit that Chinese ginger was making its way to India via Nepal. They, however, added that only those involved in smuggling of goods across the border are involved in the anomaly.

Ginger is the second largest farm export from Nepal after cardamom. Volume of ginger export was already going down due to price volatility in the Indian markets.

Though officials of Mechi Custom Office said that they were unaware of the import ban, Plant Quaratine Office at Kakarbhitta confirmed about the ban.

“Indian officials say that that there has been excessive pesticide residue in Nepali gingers and that Chinese gingers was being exported via Nepal," Bhanudatta Mishra, a quarantine officer, said. "That is why it has put a ban on import of gingers from Nepal.

According to Mishra, the Indian side has asked exporters to either bring lab test report from Kathmandu, or wait till the lab test results come from Kolkata.

The Indian restriction will hit farmers hard. Farmers are ready to send their produce to the market. Ginger farming is done in around 3,770 hectare of land in Taplejung, Panchthar, Ilam and Jhapa. Nearly 55,000 tons of ginger is produced in these districts annually.
Until four years ago, Nepal was the fourth largest ginger producer in the world.

KATHMANDU, Jan 4: India's Ministry of External Affairs has said that no talks have been held between the Nepalese and... Read More...

BHADRAPUR, Sept 1: The Appellate Court, Ilam has on Friday issued an interim order not to impose export tax on... Read More...

JHAPA, Sept 9: The ban placed on imports of Nepali ginger by India has been lifted from Friday, with the Indian... Read More...