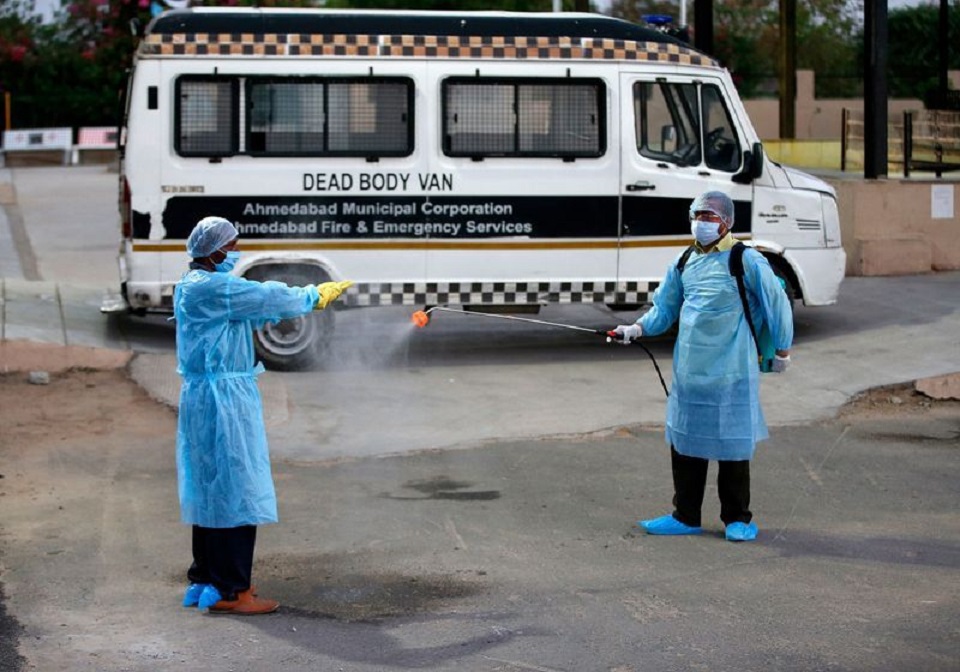 A municipal worker sprays disinfectant on his colleague after they cremated the body of a man who died due to coronavirus disease (COVID-19), at a crematorium in Ahmedabad, India, April 12, 2020. REUTERS/Amit Dave

NEW DELHI/ISLAMABAD, April 13: India and Pakistan are planning to partially open up some parts of the economy, officials in the two countries said on Monday, as the costs of harsh lockdowns to limit the outbreak of the coronavirus mount across the region.

Indian officials said the number of coronavirus cases in the country increased to 9,152 on Monday, including 308 deaths, a swift rise from fewer than 1,000 two weeks ago, even though the country of 1.3 billion people is under a sweeping 21-day lockdown.

But the shutdown has left millions of people without work and the World Bank forecast India’s economic growth could drop to 1.5% to 2.8% in the fiscal year that started on April 1, the weakest pace in three decades.

Prime Minister Narendra Modi has asked his cabinet colleagues to come up with plans to open up some crucial industries as the livelihoods of millions of people were at stake, a government source involved the deliberations said.

One plan is to restart some manufacturing in the autos, textiles, defence and electronics sectors, according to a government note that Reuters has reviewed. Firms could start a quarter of their operations while ensuring social distancing, the note said.

“As the prime minister has indicated, we will have to move towards economic activity, while taking utmost care of the lockdown and social distancing,” said Manohar Lal Khattar, chief minister of the northern state of Haryana.

He said he planned to divide his state into three zones - a red zone where there have been the most cases of coronavirus, followed by orange with fewer cases, and green where no outbreak has been reported. The government may employ a similar plan, officials said.

“In the green zone, small and medium industries will be allowed to start operations, provided the entrepreneur gives us an undertaking to fulfil the guidelines in letter and spirit. We want small industries to start operations at lower capacity first,” Khattar, a close ally of Modi, said.

The lockdown ends at midnight on Tuesday and Modi is due to take a decision on whether it should be extended. Several states have urged for an extension as the infection spreads through densely packed communities, but they also want a less sweeping shutdown.

Pakistan’s command and control authority, led by Prime Minister Imran Khan and consisting of the civil and military leadership, was due to meet on Monday to decide whether to extend the countrywide lockdown beyond April 15, two cabinet ministers told Reuters.

“I am sure we are going to have at least a 10-day extension, or a couple of weeks,” one of the ministers said.

He said the meeting will also give a go-ahead to seal virus hot spots, the pockets there is widespread incidence of the disease.

The ministers said the meeting will also lay out a phase- wise plan of reopening some industry, mainly the construction and export sectors, adding that business owners will have to give undertakings to adhere to safety measures and ensure disinfection of their factories. They will be allowed to function only with a reduced workforce.

Pakistan has recorded 5,374 cases of the virus, with 93 deaths. “The biggest worry now is people dying of hunger. The dilemma on one side is stopping people dying from the virus, and on the other hand, preventing deaths from hunger as a result of the lockdown,” Khan said in a video message on Sunday.

Official government figures on the spread of the coronavirus in South Asia are as follows:

* Bangladesh has 621 cases, including 34 deaths

* Afghanistan has 607 cases, including 19 deaths

* Maldives has 20 cases and no deaths

* Nepal has 12 cases and no deaths

KMC assigns 11 places for the operation of vegetable market

KATHMANDU, April 7: In a bid to minimize crowding at the Balkhu and Kalimati vegetable market, the Kathmandu Metropolitan City... Read More...

KATHMANDU, March 23: Government on Monday has decided to enforce week-long nationwide lockdown to be effective from 6 am on... Read More...