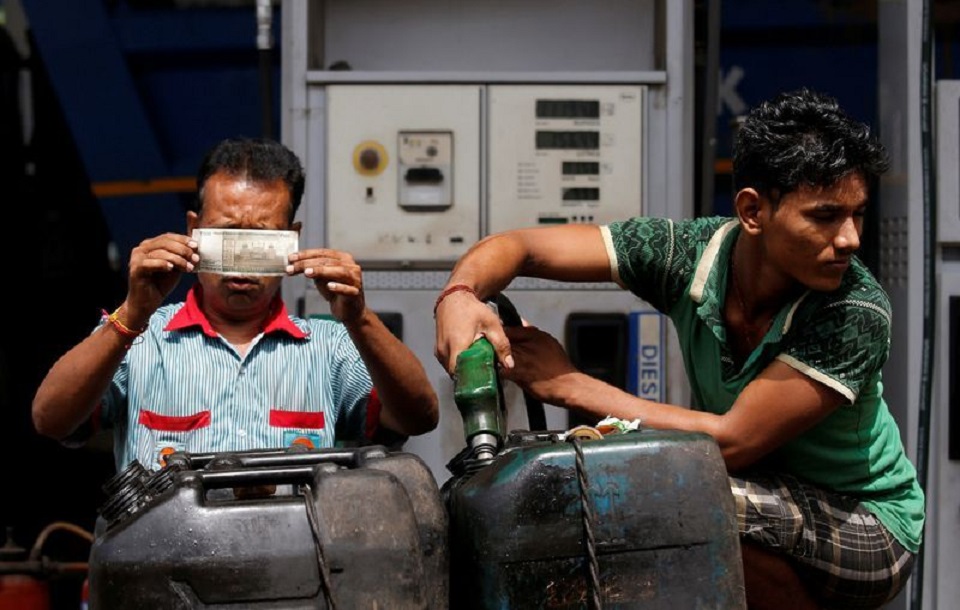 A worker checks a 500 rupee note as a man fills diesel in containers at a fuel station in Kolkata, August 14, 2018. REUTERS/Rupak De Chowdhuri/Files

NEW DELHI, March 14: India on Saturday increased taxes on petrol and diesel in a desperate attempt to increase government revenue at a time when tax collections have fallen amid the weakest economic growth in over six years, with the coronavirus impact yet to come.

The excise duties on the fuels, which have been hiked by 3 rupees per litre, is expected to result in up to 400 billion Indian rupees ($5.42 billion) increase in annual revenue, a senior government official told Reuters.

Taxes on petrol and diesel, which account for more than a third of retail fuel prices, are one of the biggest sources of income for Prime Minister Narendra Modi’s government, which has more than tripled revenue from taxes on fuel since first coming to power in 2014.

The move comes at a time when India is staring at the highest ever tax collection shortfall, as corporate and income tax collection for this fiscal year is set to fall for the first time in at least two decades and the goods and services tax revenue could see a gaping shortfall.

Indian opposition parties have criticised the Modi government for their high fuel tax policy amid a decline in rural consumption, but economists have praised the move as fiscally prudent.

“This balance by the government is a good strategy. This also helps the state shore up some revenue for other useful expenditures,” said N.R. Bhanumurthy, economist at the government-backed National Institute of Public Finance and Policy in New Delhi.

India stopped controlling petrol prices in 2010 and diesel prices in 2014, linking them to global crude markets in a bid to ease pressure on government finances and improve the earnings of oil refiners.

Global oil prices posted their biggest week of losses since the 2008 global financial crisis, rocked by the coronavirus outbreak and efforts by top exporter Saudi Arabia and its allies to flood the market with record levels of supply.

The national hike translates to a 4.8% increase in diesel prices, and a 4.3% hike in petrol prices in India’s capital New Delhi, compared with Friday’s prices. Petrol was sold at 70 rupees a litre, while diesel was sold at 62.74 a litre on March 13.

NEW DELHI, May 16: India’s total novel corornavirus cases rose to 85,940 on Saturday, taking it past China, where the pandemic... Read More...